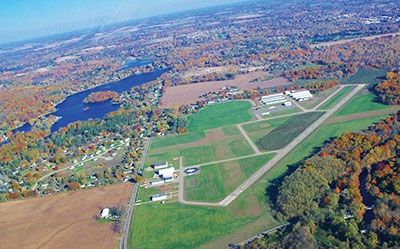 The park-like green color of the Hastings City/Barry County airport compared to surrounding lands is largely due to the liquid dairy manure used on the airport’s infield and grass runways. Hastings/Barry County Airport

Pilots flying into the Hastings City/Barry County Airport in Michigan have little trouble spotting their target these days as it is often the only green patch of land on the horizon, thanks to the airport’s agreement to allow a local dairy farm to spread liquid manure on its open areas and grass runways.

Airport manager Mark Noteboom says the airport began working with its neighbor, Sand Creek Dairy, four years ago to put 100 acres of the more than 340-acre airport site into alfalfa in an effort to improve the appearance of the facility and better manage wildlife wandering into the area. More recently, the airport allowed the dairy to surface apply liquid manure using a drag hose system from its dairy lagoon to fertilize crop areas on airport lands, including the infield and two grass runways.

The airport caters to smaller aircraft, including ultra-lights, gliders, helicopters and the military, hosting as many as 25,000 takeoffs and landings per year.

The results of applying the liquid manure were almost immediate. According to custom manure applicator Dan Shaw, who operates as MTI Inc., and is responsible for applying the manure, the site went from an unsightly brown (because of the difficulty growing vegetation in the light, sandy soil) to a park-like green after the airport started to apply liquid dairy manure. MTI has been handling all of Sand Creek Dairy’s manure application in the farm’s vicinity for the past six years. The company is headquartered 50 miles east of Saginaw in Michigan’s thumb area.

Because the dairy grows feed crops like alfalfa and hay as opposed to commercial crops like corn or soybean on the airport property, Shaw converted the injection bar on his drag hose system to splash pans to surface apply the manure.

“It has really built up the turf runways, which we needed to do,” says Noteboom. “If we had done that at our own expense, it would have been quite expensive.” He adds that no Federal Aviation Authority (FAA) approval was required for this project to proceed, except that the FAA prefers that only low ground crops be planted.

“There’s a lot of cropping on airports being done, but as far as spreading the manure the way they do it, there are very few airports that put on an application like this,” says Noteboom.

The main reason many have avoided it is because of concerns with odor. In the case of Sand Creek Dairy, it is using liquid manure from the fourth stage of its lagoon, which has the least amount of odor-causing nutrients in it.

“They have to have the right application method for us to allow them to do it – otherwise, no way,” says Noteboom. “The stuff Dan Shaw puts down now, it pretty much dissipates in one day and there is really no smell after a couple hours. So it’s pretty friendly stuff.”

Shaw operates the tractor that controls the drag hose system himself and says that applying the manure on the airport lands is challenging because unlike farmland – that tends to consist of one, unbroken tract of land – the airport property consists of a number of small parcels, which means it requires a lot more maneuvering and finesse.

“I’ve based my business on quality rather than quantity over the years,” says Shaw. “We do our best to do a good job. We like a challenge and the satisfaction is to see the results.”

That has resulted in considerably more custom manure application opportunities for him in the southern Michigan area, which has been increasing by about 10 million extra gallons per year. MTI is working with equipment suppliers Hydro Engineering and Bambauer Equipment to upgrade its fleet so that Shaw is able to apply more gallons per hour and meet the growing demand. He says working in the lighter soils near Grand Rapids helps him to get rolling with his business earlier in the year.

The airport estimates that it is saving at least $5,000 per year in maintenance costs by working with Sand Creek Dairy to fertilize and harvest feed crops from the airport property. It takes about three days for the liquid manure application to occur because of the number of small parcels involved. During that time, the airport closes the use of its grass runways. Applications occur once in the fall when there is reduced airport activity. It is typically done in November when flies are dead and it is cold enough so that there are minimal odor issues. Shaw adds that they also pay attention to wind direction when they apply the manure.

Sand Creek Dairy co-owner Luke Haywood says the liquid manure application rate on the airport lands is carefully controlled and based upon the dairy’s nutrient management plan. The manure’s nutrient content is lab tested and applied according to recommended rates for the type of crops on the airport property. They apply between 20,000 and 25,000 gallons per acre of liquid manure from their stage four storage lagoon. He adds that gaining permission to use liquid dairy manure on the airport land has provided a benefit to everyone involved in the project. The airport is saving money by not having to look after that 100 acres and it has a much more attractive facility. The dairy benefits by gaining more land to grow quality feed for its 1,200 dairy cows. And Dan Shaw has earned more business custom applying manure.

“By using manure on the airport fields, yield has increased three- to four-fold because of the lack of soil fertility and organic matter on the sandy soils,” says Haywood. “Previously, we were not able to cover our harvesting expenses with what grew naturally.”

Working with Hastings City/Barry County Airport is only one of many challenges that the Sand Creek Dairy must carefully manage as there are also about 20 expensive homes abutting the property. An important lake tributary also runs right between Sand Creek’s dairy barns, and there are also about 300 houses around the lake where the tributary begins to flow about a half mile away from the dairy farm. The situation is about as challenging as it can get from a manure management standpoint. It comes as no surprise that the dairy injects all the manure applied to its commercial cropland in the immediate vicinity of the farm, partially to minimize odor, also to achieve more nutrient recovery and minimize potential manure runoff. The liquid manure is surface applied on hayfields and alfalfa.

“When we surface apply, we try to pick a time of year when the weather is cool and try to avoid weekends and holidays so as not to interfere with neighbors’ outdoor activities,” says Haywood.

They also maintain 30-foot grass buffer strips near any public waterways on their property that are controlled by the state.

Located about 30 minutes southeast of Grand Rapids, over time the dairy has found itself surrounded by urbanization. It has been operating for 100 years and is now owned by the fifth generation of Haywoods. The current owners are Luke and Larry Haywood with spouses Renee and Ellen. Luke’s brother, Marc, also works on the farm. He is in charge of maintenance and machine repair. Luke’s three older sons – Ethan, Austin and Devin – work in the dairy. Along with younger brothers Colton and Brenden, they will one day become the sixth-generation owners.

In addition to milk production, the dairy grows about 1000 acres of corn, 700 acres of alfalfa and 200 acres of mixed grass. They own about half of that cropland and rent the remainder. Larry Haywood has turned his cheese-making hobby into a small, artisan havarti cheese making business with the assistance of three grandchildren. It operates as the Haywood Family Cheese Company.

The dairy milks 1,000 cows and manages an additional 200 dry cows. They are housed in four freestall barns – three milking barns and the fourth a hospital barn that houses both milking and dry cows.

Within the barns, Sand Creek Dairy has alley scrapers that mechanically scrape the manure to the end of each barn. The flush/flume then transports the mixture to a sand lane. Material that does not settle out in the sand lane is dumped into two settling chambers. The liquid is pumped from the second settling chamber over sloped screens to separate out the large solids. The liquid is then either pumped into the first stage of the four-stage lagoon or recycled through the closed-loop, flush/flume and sand lane system. The four-stage lagoon has a total capacity of about 18 million gallons. Once the liquid manure reaches the fourth stage, Haywood says, it is relatively free of sand and large fiber.

“I’m guessing we are getting about a 90 percent reusable bedding rate on our recycled sand system,” he adds.

The sand in the sand lanes is cleaned out with a loader twice a day. The dairy uses Pro-Act’s manure munching microbes to help improve water quality in the flush system and to minimize odor when the liquid manure is land applied.

Sand Creek Dairy land applies its liquid manure twice a year, contracting MTI and its manure injection drag hose system. While manure is injected on lands close to the dairy or surface applied in the case of hay and alfalfa, the dairy trucks manure stored in lagoon stages one to three and land applies it farther away from the dairy. Luke explains that they have taken this approach because manure collected in lagoon stages one to three tends to have a higher nutrient content and thus presents a higher possibility of creating an odor problem.

Using a drag hose application system has helped maintain good relations between the dairy and its neighbors.

“The advantage we have with the drag hose system is that it minimizes truck and tractor traffic in the neighborhood,” says Haywood. Dan Shaw does a good job of making sure everything is done right. We have too many things at stake to have it done any other way.”