Mosida Farms, located near Elberta, Utah, is moving from a scrape to flush manure system to allow the operation to better recycle water and create cleaner sand. 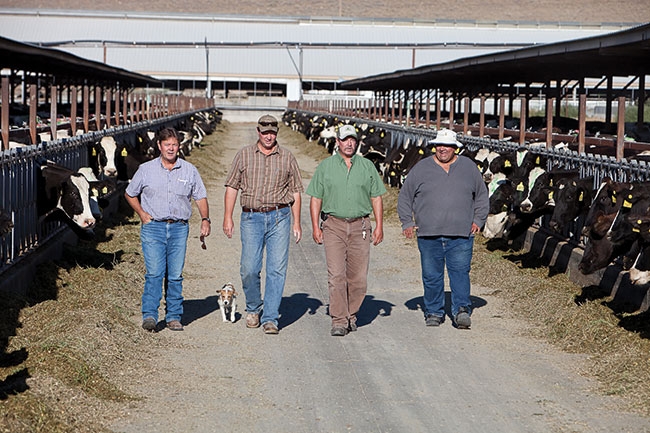 It’s 102 Fahrenheit at Bateman’s Mosida Farms in Elberta, Utah, 60 miles outside Salt Lake City. The heat is taking its toll on the dairy cows. Fans and soaker hoses run. But the heat is also taking a toll on the farmers and the community as the conflict over water usage grows.

The Batemans don’t take the water issue lightly. They continue to improve their processes, work hard to create a sustainable farm, and continually educate people about what it takes today to be a food source. Their hard work is one of the reasons they received an Outstanding Dairy Farm Sustainability award from the Innovation Center for the U.S. Dairy.

Judges evaluated the nominees’ sustainability practices based on their economic, environmental, and community impact. The independent judging panel – including experts working with and throughout the dairy community – also looked for learning, innovation, improvement, scalability, and repeatability.

The Bateman family has grown their farm into one of the largest dairies in the state with 7,000 milking cows. Along with their father, Wayne Bateman, the four Bateman brothers – Jason, Steve, Brad and Lance – currently own and operate the farm.

In addition to the dairy, the brothers also farm 3,000 acres and raise all their own heifers.

Jason Bateman says his grandfather started the dairy a number of years ago in West Jordon. After his grandfather retired in 1972, his dad, Wayne, moved the dairy to its current location. That year they were milking around 250 to 300 cows and have steadily grown.

Today, the fourth generation is coming on board, but only if the farm remains both profitable and sustainable.

Mosida Farms is a freestall dairy and uses sand for bedding. Jason says the farm is moving from a scrape to a flush system. The flush system will allow them to both better recycle both water and create cleaner sand.

Since around 2008, Batemans have been using a gravity sand sidewalk system. They created it themselves after seeing one in California that they liked because of the low maintenance.

“It has four-foot sides and is 540 feet long,” explains Jason. “The manure comes in at one end about two-thirds up, hits a wall, angles and heads down on a slope. There are two cells so that we can get the sand to fall. We take [the sand] out of our sand cells up to the drying yards, which are sloped with southern exposure.

Drying time depends on the weather. When it 100-plus Fahrenheit, like it has been this summer, it can take just four or five weeks. But other times of the year, it can take up to three or four months.

The farm is able to reclaim 11 to 12 dump truck loads of sand from the sidewalk every day.

“We’re saving about 83 to 85 percent of our sand,” says Jason. “Of course, we’re always adding to that, but we’re able to save a lot in transportation costs, because all of our sand sources are 50 miles away.”

Another area of constant improvement at the farm is the separation system. Mosida Farms is currently downsizing the number of separators to four Houle primary separators, and will be adding Houle secondary separators as well.

Once the manure is separated from the sand, it continues to a 60,000-gallon mixing tank, which allows them to get “a good mix” says Jason.

“Next it goes over to our primary separators.”

The water is collected and some is used for the cows. What water isn’t used continues to build and eventually moves to a storage tank where it pumped onto the fields. What can’t be used on the fields or for the cows, goes on to a lagoon.

“It’s been kind of an evolving thing here since we built the big barn in 2001 perfecting it,” he says. “We’re able to recycle the water many times, that’s part of the reason why we wanted to use this system.”

The solids coming off the separators are composted in windrows and then later spread on fields.

Jason estimates it takes three to six months to fully compost the solids, but it can vary.

When it comes to spreading, the Batemans use a GPS system and only apply as needed according to their CNMP (Comprehensive Nutrient Management Plan). The compost saves on commercial fertilizer says Jason.

“And it’s better because it’s organic and it’s natural. The nutrients are available. In combination with commercial fertilizer, it works really well.”

The liquids used for irrigation are held in a nearby lagoon. Jason says that in the dry state of Utah, storage is handled a bit differently.

“We don’t have to have 160 to 180 days of storage. We can haul all year if we need to, depending on the weather. If it’s stormy, then we can put it in the lagoon, and if it’s not, then we can haul and do whatever.”

Jason says it’s important to “use every resource very wisely.

“You can save millions and millions of gallons that you’re already producing for the cows that you can use later on the crops.”

The Batemans have also installed a state-of-the-art calf barn that has increased production in the herd and just finishing constructing a 600kw solar farm, which began producing power in late July. The solar farm should be able to provide 90 percent of the farm’s energy needs in the winter, and somewhat lesser in the summer.

“We did it to try to hedge your power bill for the next 20-plus years,” explains Jason.

Even with all the work that the Batemans have put into their farm to conserve water – recycling the same water many times and using only 250,000 gallons a day, which is a relatively small amount for a farm of this size – many people unfamiliar with what goes into farming are upset. They would like to see water taken from the farmers for their own use.

“In Utah, water is a big issue because we’re in a drought. The lakes are drying up. It’s hot. People need to understand that we aren’t farming just to make money. We have to make money to be in business, but we’re providing a food source for them and someday they’re going be choosing between a golf course and their food supply. That’s what we’re trying to educate them towards.”

The Batemans are trying to fight this mindset through education.

“We have a lot of visitors,” says Jason.

Some ask to tour, and others are invited. The farm recently hosted two busloads of young diary science students here from all over the country. They’ve also supplied tours for dieticians that graduated from Brigham Young University.

“Most people don’t understand everything it takes to bring a gallon of milk to their house. And the tens of millions of dollars it takes to be a dairyman nowadays. I think if you can show them that we have nothing to hide; we treat our animals well; we provide a safe, healthy product for them; there’s value in that.”

Some day Jason foresees the farm will run digesters.

“I’ve seen lots of them and we’ve been all over the country looking at them. I’m still not ready to put one in because they still have a lot of problems. Hopefully our end goal is to generate power off of the digesters, off of the manure, and all those things, and still have the nutrients to grow the crops.”

In the meantime, the Batemans will continue to make their farm more efficient and sustainable.

“We’re not done, but we’re getting closer to the end result of what we want.”