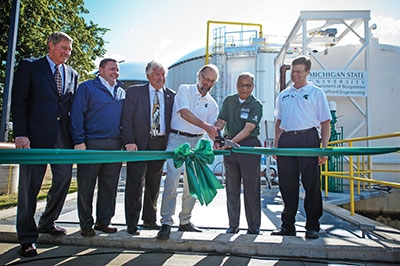 An anaerobic digester that will reuse waste from Michigan State University’s farms and dining halls and create energy for several buildings on the south end of campus is now open for business.

An anaerobic digester that will reuse waste from Michigan State University’s farms and dining halls and create energy for several buildings on the south end of campus is now open for business.

A ribbon-cutting ceremony was held Aug. 13, officially marking the commissioning and starting of operations for the facility.

“This system is the largest on a college campus in the United States,” said Dana Kirk, a specialist from MSU’s Department of Biosystems and Agricultural Engineering, who is overseeing the project. “It’s the largest in volume and in energy output.”

The digester will utilize about 17,000 tons of organic waste to generate 2.8 million kilowatt-hours of electricity per year.

“Only about 20 percent of the energy we produce is being used to sustain the process,” Kirk said. “The other 80 percent is available for other uses on campus.”

In comparison, a smaller anaerobic digester already in use at MSU for research purposes uses pretty much all of the biogas it produces to run the system.

The organic material the system will use includes cow manure from the MSU Dairy Teaching and Research Center; food waste from several campus dining halls; fruit and vegetable waste from the Meijer Distribution Center in Lansing; and fat, oils and grease from local restaurants.

Here is how it works: Manure, food waste and other organic matter are placed in the airtight tank, which will hold about 450,000 gallons of material. The tank contents are maintained at roughly 100 F for 20 to 30 days. The organic material is decomposed by a group of naturally occurring micro-organisms found in livestock manure. The result is biogas and a slurry of partially decomposed organic matter, water and nutrients.

Total cost of the project is about $5 million. It is expected to pay for itself in less than 15 years.

In addition to the two on-campus anaerobic digesters, MSU is also involved in a similar project in Costa Rica. Earlier this year a digester went online that will help provide power to a village in the Central American nation. The project is a partnership between MSU and the University of Costa Rica.

For more information on that project, visit: http://report.president.msu.edu/360/costa-rica/.