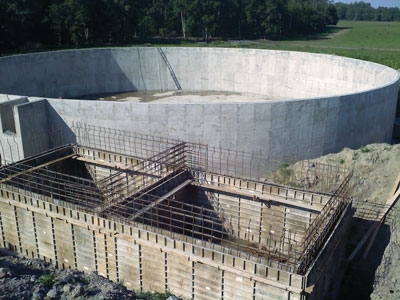 Eventually the Roaches decided to construct an anaerobic digester to process the manure from the dairy’s 1,550 cows. Contributed

Tom Roach had been working at dairies for years when in 1981 a small farm he’d worked for in New York State became available. He and his wife Diane purchased it and have been running it as a dairy every since.

Like other farms, over the course of years, the farm gradually expanded its operation. Tom began milking between 250 to 300 cows. Then it was 400, then 500.

“We never bought any more cows, we just kept them,” he says.

With expansion came the need for more buildings.

Today the farm houses five milking barns and 1,550 cows – 1,300 of which they are milking. As the family grew to be a large CAFO, they faced lots of the manure management issues that come with a large farm. The Roaches recently installed an RCM (round heated mixed digester), but prior to that they had tried just about everything.

No stone left unturned
“First we pulled spreaders with our tractors, then we started custom-hiring people to truck for us,” says Tom.

After that, and for the next few years, the Roaches used an irrigation system.

“We used the big guns that spray the manure up in the air, but that didn’t work very well,” says Tom. “The problem was, it was too easy to get runoff and odor. It was also labor intensive. It cut down on the compaction, but it wasn’t a lot faster than spreading.”

Roach spreads on approximately 1,200 acres, which includes their neighbor’s acreage, so it was important to find a good solution.

The solution
After the irrigation system, Tom hired someone in the area with a dragline system, which seemed to do the trick. “We had enough flow and we had the underground pipe from the irrigation, so it worked fairly well for us.”

Today, the Roach farm has its own dragline system with about two miles of hose. “We have someone else do our trucking though,” says Tom. “They truck the manure to the fields we can’t reach with the dragline.”

Judging by the results of the CAFO-required tests, this system is working out well. But there is always room to improve. For that reason, Tom and Diane purchased a digester to incorporate into the system.

Benefits of a digester
There were numerous reasons for installing a digester. One was to be green and a good environmental steward, but another was to control odor so the farm could spread in the summer without complaint from neighbors about the smell.

“We can get rid of a lot of our manure in the summer when the crops are growing, but the odor is a problem if we don’t digest,” says Tom. “Because we separate and digest, the manure is fairly liquid in the summer, and it gets soaked up pretty fast in the fields with little odor. You can’t say that you don’t smell it at all, but it’s not terribly offensive; it won’t make your eyes water.”

Another benefit of the digester was the energy production. The farm could produce all its own power and sell some back to the utility.

“Right now we’re producing about 350 KW. In the winter we only use about 150 KW, but that increases in the summer with the fans blowing,” says Tom.

Being able to save on electricity bills means that the digester will probably pay for itself in three to five years. But Roach is quick to point out that quickly paying off the digester takes into consideration the farm’s ability to secure New York State Energy Research and Development Authority and U.S. Department of Agriculture grants.

Of the two, the most valuable was the NYSERDA Renewable Portfolio Standard (RPS) program, which provided a performance-based incentive of 10 cents per kWh produced by the engine over three years. At that rate, it adds up quickly.

“I’m not sure if you just purchased the digester outright without the grant money how long it would take to pay for itself – or if it could,” says Tom.

Choosing the digester
When it came time to choose a digester, Tom chose the RCM International complete digester because he had seen a couple in operation. Within 10 miles of his farm there were four in operation, which, he says, speaks to the incentives.
“We checked them out and then made our decision.”

The system is pretty simple.

“Manure from the barns works its way from a continuous pit in one barn to a reception pit. From there the manure is pumped to the digester with a dual piston pump,” explains Tom.

About 52,300 gallons a day flow into the mesophilic digester, designed by RCM International, which has a retention time of approximately 28 days. The digester can handle a total volume of about 1,501900 gallons a year.

The digester is a circular aboveground concrete tank 120 feet in diameter and 18 feet in height with the liquid level of 16 feet. The digester tank has an in-tank heating system and four-inch extruded foam insulation surrounding the tank. Five mixers are inserted through the top of the digester tank.

From the digester manure overflows into a tank.

“In that tank there’s a pump that pumps the manure to two DODA separators,” explains Tom. “We use most of the solids from the separators for bedding, and we spread some. And the liquids go into the first lagoon of a two-stage lagoon.”

The first stage holds approximately one million gallons and the second, larger lagoon holds around five million gallons.
“We originally started with one small lagoon and then we needed more storage, so instead of tying the two together, we made it a two-stage lagoon system.”

The argumentfor the two-stage lagoon system, he says, is that phosphorus stays in the first lagoon. “We often truck the manure out of the smaller lagoon further away and then, from the larger lagoon, manure is draglined closer to home, so we’re getting the phosphorus further away from the farm. That’s the plan anyway,” he says.

Installation
The installation process took about a year and a half and was completed Aug. 9, 2010.

“That was the difficult part,” says Tom. “When you’re paying for things, and buying equipment, and not seeing any benefit coming back for over a year, it’s difficult.”

One of the reasons it took so long was that they had to co-ordinate not only the equipment coming but the crews. At times there were up to 25 men on the job site. Tom couldn’t take time off from the farm to manage the project and hired a construction manager, Thad Young. Thad had worked on a farm with a digester, was familiar with the installation process and helped move things along so Tom could focus on the cows.

Young took care of any permitting, construction and other issues that arose. One issue that Tom hadn’t anticipated was the three-hour time difference between RCM headquartered out of California and Roach’s farm in New York. It left limited hours to communicate.

On the bright side, Tom was able to take advantage of local talent. Because there had been digesters installed in the area, there was an electrician already familiar with the programming and electrical work.

“I certainly couldn’t have done it myself. I’m not a mechanic or an engineer or any of that stuff.  I’m a dairy man,” he says.

Changes in the electricity
Now that everything is in place, Roach’s electricity production is handled via net metering – a system owner receives retail credit for at least a portion of the electricity they generate. Until this year though, farms could only get credit on one meter. In Tom’s case it was favorable because the farm’s main meter was at the diary.

“Now the law says they have to give farmers credit on every meter that’s in our name within so many miles,” says Tom. “In my case, it takes care of all of them. We have 12 meters and so we can offset on all the meters, not just the one.”

Another adjustment the farm is going through due to the digester is new bedding. Prior to the installation the farm was using shredded paper. Today it is using manure solids It’s been a challenge to make the switch, but, Tom says, they are figuring out how to make it work.

Heating things up
The last advantage of the digester, however, helps offset the challenges. They can use the heat from the digester to heat all the water needed for washing and, Tom says, “that’s a big thing.”

“We probably use 500 gallons of water a day. Before we were using at least 100 gallons of fuel oil a week for heating water. We’re not doing that any more and it’s saving us money.”

In the end, he says, the digester was definitely the right decision.