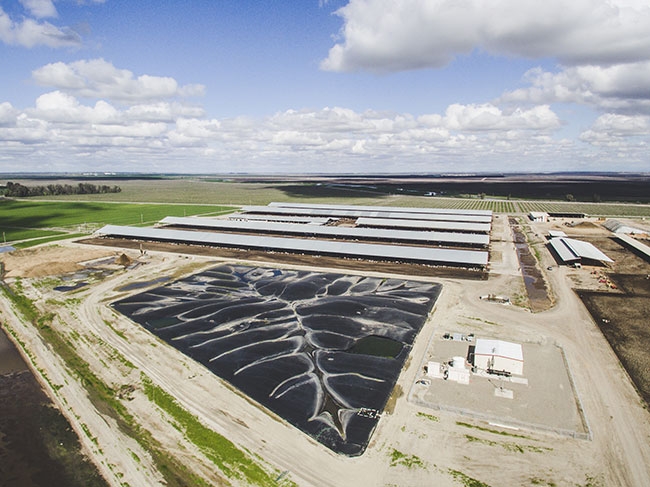 The cover on the anaerobic digester at the Open Sky Ranch dairy captures the biogas released by the raw manure. It stops the methane from entering the atmosphere.

For Eric TeVelde, owner of Open Sky Ranch Dairy near Riverdale, Calif., the business case to purchase a deeply discounted, mothballed, but structurally sound anaerobic digester on his newly-acquired farm was just too good to ignore.

TeVelde, who purchased the Central Valley dairy in 2012, now operates five, free-stall milking barns on the farm with about 4,500 milk cows. They have an additional 4,500 dry cows and replacement cattle in what is one of the largest dairy farms in Fresno County. TeVelde and his family had been dairy farming in the Central Valley for generations.

The dairy operates a closed flush manure management system where barns are flushed clean with water two to three times a day. This generates about 30 million gallons of liquid manure annually. The manure and waste water mix is transported through a storage and piping system, eventually being pumped into one of several nearby lagoons, which all told have a holding capacity of about 100 million gallons.

The dairy farms about 1,500 acres, primarily growing feed for their cows. Prior to the restart of the anaerobic digester, the raw manure was processed through a US Farm Systems-brand solid separator, with the liquid manure continuing on to the lagoons and the solids reused as bedding. TeVelde says the liquid manure was sold or land applied on the dairy’s cropland as organic fertilizer.

It is this approach to manure management that concerned state legislators because of the amount of methane released by storing the raw liquid manure. By treating the manure through an anaerobic digester prior to land application, this removes the methane while retaining all of the other beneficial nutrients, which is why the state is financially supporting this approach to manure management to help reach its methane emissions reduction target. The Environmental Protection Agency (EPA) says that methane emissions have 25 times greater impact on climate change than carbon dioxide over a 100-year period.

The decommissioned anaerobic digester and the accompanying biogas management technology that TeVelde purchased was situated on the Open Sky Ranch Dairy property. After talking to other dairy farmers who had installed anaerobic digesters and working with California-based biogas power developer, Maas Energy Works (MEW), TeVelde recognized the potential of refurbishing the facility and using the biogas for power production. He decided to purchase the installation in 2015.

In California, an anaerobic digester is often a lined, underground, covered lagoon where biologically-rich waste material – like liquid manure – is collected and retained over a specified time period. The microbes within the manure in the oxygen-free environment generate methane, which can be captured, scrubbed, and used as fuel, with the liquid and solid by-products still available for organic fertilizer or cow bedding.

California, the largest milk-producing state in the U.S., announced last November that it wants its dairies and other livestock operations to reduce methane emissions by 40 percent below 2013 levels by 2030. The regulations currently in development will take effect in 2024.

TeVelde says his purchase of the digester was not in response to this specific regulation, but he definitely was anticipating that the dairy industry was on legislators’ radar.

A state grant to cover nearly half the $2 million cost of redesigning and refurbishing Open Sky’s digester helped to sweeten the deal. It was a $973,000 matching grant under the California Department of Food and Agriculture’s Dairy Digester Research and Development Program. In July 2015, the department distributed grants totaling $11.1 million to five dairy digester projects from the program.

What gave TeVelde further assurance that his biogas recovery and power generation system would succeed where the previous owner had failed was working with Maas Energy Works. MEW already had nine biogas recovery and power generation systems working on dairies throughout the western U.S. Once they sat down and crunched the numbers, TeVelde could see the business sense in purchasing the digester and pursuing the redesign project, with the government grant support.

The biogas recovery and power generation system designed and built by MEW and owned by the dairy came on line last August. The dairy looks after day-to-day operations, with ongoing and contracted monitoring by MEW.

“What the dairy has contracted with us to do is that we monitor the equipment 24/7 and control the equipment from our control centre in our office,” says Daryl Maas, owner of MEW. “We do all the parts ordering, calibration of the equipment and all the maintenance check list.”

TeVelde says he and a hired contractor look after what needs to be done to maintain the digester and power generating system, with direction provided by MEW. The contractor looks after such details as regular oil changes on the engine powering the generator and any other maintenance requirements.

“The maintenance list provided by Maas Energy is not very extensive, and if I miss one day, it’s not the end of the world,” says TeVelde. “I just want to make sure everything is working properly.”

So far, he has found the system manageable and functioning as advertised, and is anxious to see how well it performs over the next five to 10 years.

He says the power generated by the 800 kilowatt (kW) system replaces all of the dairy’s power consumption, and estimates that with saving of about $500,000 per year, the system should pay for itself within five years.

In fact, the system is generating more biogas than the current power generator can consume. California restricts power generation from a single generator to offset the dairy’s own power bill and using the same system to sell excess production. So the dairy is seriously considering installation of a second power generator, using the excess biogas currently being flared to produce power to sell to the grid.

Restarting the digester has not caused a major disruption in manure flow at the dairy. Maas says the company’s goal is to take a plug-in approach to work within the existing manure management system.

He describes the Open Sky Ranch Dairy redesign and refurbishing project as unusual, because the biogas produced by the previous system owner was not used as fuel for power production. The goal of the old system was to capture the biogas, scrub it, and then sell it as a commodity through existing natural gas transmission lines. However, the owner had difficulty cleaning the biogas economically so it met utility grade specifications. Given the current low price for natural gas, this led to the project’s ultimate failure. Maas agreed that given current natural gas prices, using the biogas as fuel in power generation makes more business sense for most dairies.

“That’s a complicated business model, so most people do electricity,” Maas adds.

One further incentive for Open Sky Ranch Dairy to voluntarily pursue the project prior to any regulations requiring methane reduction from the dairy is that the dairy is eligible to sell greenhouse gas offset credits, also known as carbon credits, to help pay for the project. As part of its service, MEW conducts all the paperwork for the verification of the carbon credits generated by the facility.

Upon inspection, Maas says the digester portion of the mothballed installation was in, “pretty good shape. It was built to all the latest water board requirements here in California. It just needed some repairs and redesign.”

This was a huge advantage for TeVelde because construction of the anaerobic digester is by far the most expensive part of any biogas recovery system. The major expense of the project was to remove the old biogas recovery, treatment and transmission hardware down to the concrete foundation, and then install all the new hardware needed to clean the biogas, power the generator, and monitor the overall system.

The project required the installation of blowers to circulate the biogas in the digester, an iron sponge scrubber to remove sulfur from the biogas, a building to house equipment, electrical switch gear to connect the generator to the power grid, and the 800 kW Dresser Rand Guasor engine and generator.

The digester is a continuous flow model with a retention of about 40 days. The raw liquid manure is processed through the solids separator, then through the digester, with the liquid byproduct continuing on to the storage lagoons. It is land applied as fertilizer in the spring and summer.

“The manure system hasn’t changed much,” says Maas. “The main thing is that we are getting energy out of the manure now and stabilizing it somewhat. All the existing (manure management) structures have remained in place. We have just added one more step in the process . . . Also, we take out the carbon and the hydrogen for fuel, but we leave in the nitrogen, phosphorus and potassium, all the things that the soil wants.”