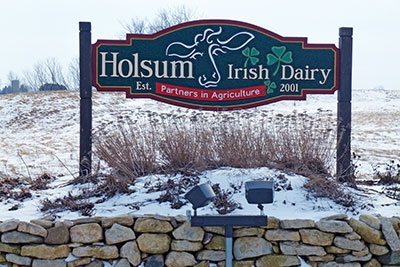 Holsum Dairies, which operates two farms – Irish and Elm – was one of three farms from across the U.S. recognized in 2012 for their sustainability efforts. Innovation Center for U.S. Dairy

Since its arrival in Hilbert, Wis., in 2001, Holsum Dairies LLC has had a huge positive impact on the surrounding community.

The company has provided jobs and a new feed market for local farmers, while ensuring it is having minimal impact on the local environment by using anaerobic digestion to process its raw manure. This provides a source of cheaper organic fertilizer back to its farm feed suppliers and cheaper bedding for itself and other area dairies.

The dairy is co-owned by veterinarian Dr. Bob Nagel and Kenn Buelow along with a group of investors from New Mexico. The company operates two dairies about 30 miles south of Green Bay called Holsum – Irish and Holsum – Elm. Together, they produce about 110 million gallons of manure annually. The ownership group is seriously contemplating the construction of a third dairy.

The group is keen to maintain good relations with its neighbors by minimizing odor and carefully managing the nutrients in its waste stream, without losing sight of the need to operate profitably. The decision to use anaerobic digestion to process its manure is contributing significantly toward achieving all those goals.

“We’re always going that extra mile to make sure that we’re up front and well communicated,” says Dr. Nagel, adding that the dairy contributes about $24 million annually for such services as plumbing and electrical, hauling, equipment repair, and agricultural work within Calumet County, where Hilbert is located.

The owners chose to build in the Hilbert area of Wisconsin because of its geology, which has good clay for groundwater protection. It also has a lot of limestone, which yields good sources of water.

In terms of support for the dairy, the area had a large surrounding farm community, which provides it with a good potential resource for feed as Holsum Dairies has very little cropland of its own. Holsum depends heavily on its local feed suppliers, and having such resources has really made it financially worthwhile for
area farmers.

“We pay them $50 per acre more than if they sold their crops as grain,” says Buelow. The dairy has partnered with 40 farmers who supply them with feed and who purchase their high nutrient liquid by-product from the dairy lagoon for organic fertilizer at a discounted rate.

“It’s been a very good relationship with our farmers,” says Dr. Nagel. “They have been great to work with. It’s all about good communication and structuring the situation so that it is fair and straightforward for everybody.”

The company’s manure management method is to process all 110 million gallons through four anaerobic digesters supplied by local company DVO Inc. Digesting the manure instead of land applying it as raw manure, Dr. Nagel says, helps the dairy deal with what would have been a significant odor problem. Using this disposal method also provides it with several additional potential income streams.

The two newest digesters installed at Holsum – Elm cost about $2.4 million, and Dr. Nagel says they have paid for themselves. He estimates that it took about 4.5 years for the payback to occur. They did receive a small federal grant for their installation.

The digesters are lower temperature digesters, operating at between 97 and 99 F and two were installed at each dairy when they were built. Dr. Nagel adds that the main reasons Holsum chose DVO were because it was very helpful working with the dairy through the learning phases when the digesters were installed and because DVO is local, which means that service support is close by if needed.

All of Holsum Dairies’ barns have sloped floors. The dairy waste water and manure generated by the dairy herd is all scraped into a central, concrete lined reception pit installed at each dairy location, which has enough capacity to store about a day’s worth of manure. Then the mixture is fed into the digesters, which are located about 250 feet from the barns. The anaerobic digestion system is a continuous flow system. Raw manure is constantly entering the digesters at the infeed from the storage pit, while biogas, a high nutrient liquid stream and a solid steam are constantly being generated at the outfeed. The raw material is designed to stay in the digester for 21 days, but in reality, Dr. Nagel says, it takes about 17 days.

“We like to think of it (the digester) as a cement cow’s rumen,” he says.

The digester consists of three chambers. The first chamber is called the acid chamber where the manure is heated and its pH is changed. It then proceeds through two more chambers, which are mixing and maintenance chambers. The entire digester is covered, with the biogas rising to the top. A piping system captures the biogas, it undergoes a conditioning process, and then it is transported to electric generator engines as fuel. After the digestion process and as the treated material exits the digester, it undergoes a separation process to separate out the solids from the liquids by passing through FAN screw presses. Each dairy has three screw presses. The high nutrient liquid waste stream is collected in a lagoon capable of storing 110 million gallons. All three by-product streams – the captured biogas, the liquid by-product stream and the solid by-product stream – generate income for the dairy.

The biogas-fueled electric generators supply power under a Power Purchase Agreement (PPA) to local power utility Wisconsin Public Service. All the power generated is fed to the power grid with a portion wheeled back to supply all the power requirements for both dairies, including the operation of their milking machines, fans and lights. About 900 kilowatts is produced at the Holsum – Irish dairy and another 1,200 kilowatts at the Holsum – Elm dairy. They produce more power than they can use, as they consume only about 40 percent of what they generate. The remaining 60 percent of surplus power is sold as a commodity to Wisconsin Public Service.

The DVO anaerobic digestion system is a co-generation system. In addition to generating power, the heat produced by the reciprocating engines on the generators is used to provide about 85 percent of the dairies’ heat requirements as well as maintaining the temperature within the digesters even during the cold winter months.

The high-nutrient liquid by-product stream is collected in a three-stage lagoon and sold back to Holsum Dairies’ farm feed suppliers as organic fertilizer.

“The three-stage lagoon helps us to partition the liquid waste stream according to plant needs,” says Dr. Nagel, as most of the remaining solids tend to collect in the first stage, with the nutrient content diminishing as it progresses through the second and third stages.

To stay on good terms with area residents, the company transports about 82 percent of the liquid by-product collected in the lagoon from the digesters and applies it to surrounding cropland using a drag hose system, which saves on a lot of wear and tear and traffic on local roads. The dairy’s custom manure applicator is Phil’s Pumping, headquartered in Chilton, Wis., and the liquid is pumped as far as five miles for
field application.

Because the recycled solid by-product stream is largely pathogen free after being heated during the digestion process, it is reused as bedding at the dairy. Holsum Dairies uses a portion as bedding itself, which Dr. Nagel says saves them about $240,000 annually between the two dairies in bedding costs. Its consistency is about 30 percent dry matter and 70 percent moisture, and they try to use it when it is as fresh as possible because if it sits too long it will start to heat up. They sell surplus solid by-product for bedding to seven other dairies.

And because Holsum Dairies uses anaerobic digestion to process its raw manure and uses the biogas to produce power rather than allowing it to enter the atmosphere if it is being land applied as one of the components of the raw liquid manure, it is generating carbon credits for the dairy. These carbon credits are being successfully marketed as yet another income stream.

The dairy also collects tipping fees from extra substrates that it mixes with its own raw manure waste stream that enters the digesters.

“We get some washed down waters from a couple of different food manufacturers that are high in nutrients that the city municipal systems can’t handle,” says Dr. Nagel, adding that these extra substrates have had a positive impact on biogas production.

Operating the digesters has not been without its challenges. For example, the dairy has taken about six weeks’ downtime to clean out the buildup of solids.

“We know that putting really long fibres or heavy ash materials into the digester is a bad thing because they definitely will build up in the digester,” says Dr. Nagel. “For example, putting straw in a digester is just a poor choice.”

The material they recovered, however, was high in nutrient content so it had value as organic fertilizer and was disposed of easily.

He adds that it is important to have consistency of material entering the digester “because like feeding a cow, you want it to be consistent so that it functions the same every day.”

Holsum also has signed a maintenance contract for the service of the generator engines, with payment based on uptime and electrical production.

“Would we do it again if we built another dairy?” he asks. “No question.”

In 2012, the inaugural year for the U.S. Dairy Sustainability Awards, Holsum Dairies was one of three dairies from across the U.S. recognized for their sustainability efforts.