Post-harvest application is unique from other periods in the year. How can you make the most of it? 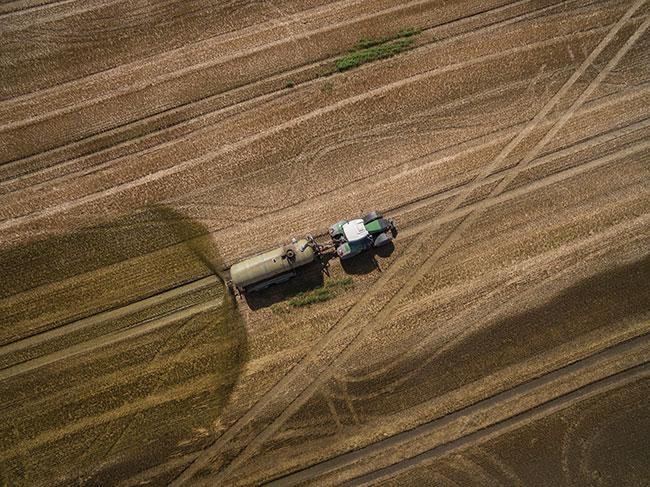 Despite how helpful manure is, it can also prove challenging to manage during weather shifts. Fall applications pose several specific challenges for farmers and custom manure applicators alike. When is the best time to apply manure post-harvest? How warm or cool should the soil be when you are applying? Is a single application best or should you consider a split application?

We spoke with several agricultural experts to get their advice on what growers should know about how and when to conduct fall applications. We also asked them to address some common myths about fall applications and what producers should be aware of regarding these misconceptions.

Here’s what they had to say.

Preparing in the summertime
Even though most farmers won’t begin fall applications until at least September or even October, they can learn a lot about what may be required then during the summer.

Robb Meinen, a senior extension associate with Penn State University Extension, says if production turns out as expected come harvest, that likely means the nutrients that were applied to that field were properly utilized. However, in a scenario where something went wrong (such as a drought) and there was a decrease in expected production there could be residual nutrients left over for next year. In such a case, that means the grower might not need to use as much of a nutrient like phosphorus on their field in the fall and may be able to utilize it elsewhere.

Rogers points to a particularly wet summer Michigan experienced a few years ago that delayed application until much later that fall and in some cases forced farmers to postpone application until the following spring. Such a scenario could very well play out again soon as weather patterns appear to be trending in a more extreme direction.

“That’s definitely making a difference in planting and harvesting and fertilizer applications, whether that’s commercial fertilization or just manure,” she explains.

That’s why it’s important, Rogers says, for farmers to keep records of such trends in order to help them determine and adjust management practices so fertilizer can be applied most effectively in the fall.

Split decisions
A split application is hardly a new concept, but it’s one that seems to be gaining traction with a growing number of farmers.

How does a grower know when a split application is required? That’s a good question, says Brian Dougherty, a field agriculture engineer with Iowa State University Extension and Outreach. One way to tell whether a split application may be necessary, he says, is if you’ve historically used just a single fall application and seen a subsequent reduction in yield

Dougherty’s advice in such a case is to try backing off on your fall application rate and then come back in the spring to apply some side dressing such as liquid nitrogen.

The upside to a split application is that you are less likely to apply too much fertilizer and end up losing some of those valuable nutrients, says Meinen. Applying fertilizer at a lower rate in the fall, means nutrients like nitrogen and phosphorus are more likely to stick around for next year’s crop, he adds.

Safety first
Regardless of when or how you apply fall fertilizer, growers need to be aware of any relevant regulatory or safety requirements, which can vary from state to state and province to province.

Rogers advises farmers in the U.S. to familiarize themselves with best management practices – a set of recommendations designed to make economic and environmental sense and supported by the best science available.

Meinen says the onus is on growers and applicators to know what local regulations are and what they are required to do when it comes to fall applications, including application rates and setbacks in environmentally sensitive areas. That could include having a certain amount of crop residue or a cover crop in your fall management plan to assimilate nutrients applied to the field and holding them there until spring.

Regardless of differences in regulations from region to region, safety concerns are pretty much the same where fall applications are concerned. Dougherty says one of the primary safety issues related to fall applications is potential gas buildup (particularly methane and hydrogen sulfide) when manure is being agitated or pumped out of a storage facility. He suggests producers use a well-ventilated area when they’re agitating, not to go into any confined spaces during pump out and keep an eye on their animals for any signs of stress. He also advises growers who are hauling their own manure to check with the Department of Motor Vehicles on axle weights and to make sure they have all the necessary lighting and slow-moving vehicle signage in place to reduce the risk of collisions with other vehicles. 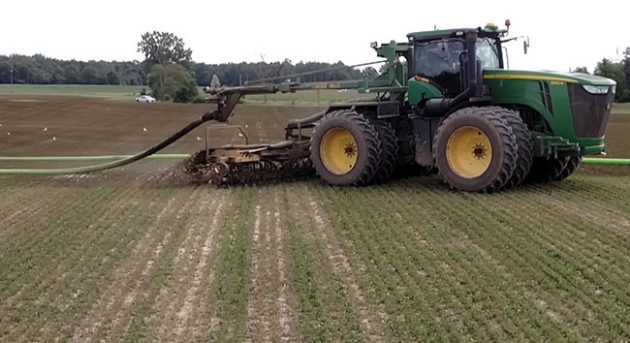 Manure application on alfalfa in the fall.
Photo courtesy of Sarah Fronczak.

Evaluating equipment
All the knowledge in the world isn’t going to serve you well if you don’t have the right equipment to do the job.

Rogers says one of the most important pieces of equipment for applying fall fertilizer is a manure injector. Although it is more commonly associated with summer application, it still has a role to play in the fall by placing nutrients closer to the root zone where they can do the best job in boosting plant health. It also contributes to reducing loss of the manure nutrients through surface runoff during storm events and winter wind.

“By having equipment that allows you to work the nutrients into the soil and it’s not just surface supplied then you can keep those nutrients in place and you’re not as likely to lose them in runoff situations,” she explains.

Dougherty says another important tool to have on hand for fall applications is a gas monitor to ensure chemical compounds such as hydrogen sulfide don’t exceed recommended safety levels. He also encourages growers to have a manure testing kit on hand in the fall “so they know what they’re going to be applying or can at least calculate after the fact how much they put on.”

Perhaps the most important tool to have on-hand for fall applications isn’t really a tool at all, Meinen says. He recommends every grower have a nutrient or manure management plan and to adhere to it during their fall applications to ensure nutrients are being placed in their field in a manner and location where they’ll do the most good.

Myths and misconceptions
Regardless of the volume of information available, some misconceptions regarding fall applications still exist.

One of the most common ones is that it doesn’t really matter when nitrogen is applied in the fall. That simply isn’t true, Dougherty says. He says growers should wait until soil temperatures have dropped to below 50 F (10 C) before applying any fall manure since that’s the point at which microbial activity in the soil starts to slow down. Applying any sooner means the microbes in the soil can start converting the nitrogen into nitrate form, which can then be easily leached through the soil and lost.

“We’ve got a comparison looking at early fall manure application when soils are still really warm versus late fall application…and we see a big yield difference. It’s about 40 bushels per acre,” he adds.

At one time, most growers believed fall fertilizer had to be applied before any cover crops could be planted. Meinen says many growers have now come to realize that isn’t necessarily true. In fact, an increasing number are now putting manure on top of established cover crops.

“People used to be worried if they drove over the cover crop that the cover crop stand would be harmed,” he explains. “That can happen, but we see more and more people placing cover crop seed immediately after fall harvest, for instance the silage chopper and grain drill may be in the field at the same time.

“If it’s already established and you do drive on it you are still usually better off because you have that extra week or two of cover crop growth which in the fall can really make a difference. If you get a really cold fall and you still haven’t gotten your cover crop in, but you’ve put manure on…you haven’t really gained as much.”

Another misconception about fall applications is that you don’t really have to work fertilizer into the ground because nitrogen isn’t as likely to volatilize due to cooler soil temperatures. Rogers says that isn’t correct in many cases. “There is some research that shows the nitrogen doesn’t volatilize, but you are still at-risk for nutrient run-off, especially when it’s surface supplied and you get rain coming in or snow and it melts. It’s still best practice if you can work that manure or fertilize into the soil to help prevent runoff and volatilization of nitrogen.”

Don’t forget storage
Come fall, many farmers’ thoughts turn to storage and how their storage system will cope through the cooler months.

Rogers says a rule of thumb is for growers to determine if their storage system has the capacity to withstand a 25-year, 24-hour storm event that produces a maximum amount of precipitation. “Do you have a storage system that can hold six months of manure to make sure you can get through that winter season without having to apply manure?”

She also recommends keeping accurate records of animal head counts and note any increases and what they could mean for manure storage capacity. “I know it sounds like a no-brainer but it’s an important management check.”

Even if your capacity is sufficient, Dougherty recommends checking it in the fall to make sure it is in proper working order. That includes an inspection after it has been pumped out to make sure there are no cracks or leaks anywhere. Growers may even want to consider using a long-scoped inspection camera to make sure there are no cracks below the surface. In the case of outdoor lagoons, Dougherty suggests taking a walk around the perimeter to check for any animal burrows and fill them in as well as removing any vegetation or brush with a deep taproot. •