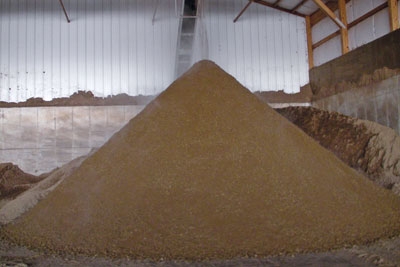 The compost you produce from your manure may be a valuable product, but is it a marketable product? Farmers ask experienced compost manufacturer Brad Matuska that question all the time. The correct answer, he says, is “that depends.” It depends on how the compost will be used.

Through his company, Mississippi Topsoils, headquartered in Cold Spring, Minn., Matuska and his partner, Math Miller, have been producing compost from poultry bio-solid material and, more recently, cow manure, since 1998. Its products are marketed under the Soil Essentials Premium Soil Products label and distributed through landscape, greenhouse and garden center supply companies.

Mississippi Topsoils has partnered with one of the state’s largest dairy operations, Riverview, in Morris, Minn., to purchase a portion of the stabilized manure that exits from the dairy’s anaerobic digester, which the compost manufacturer converts into high-quality compost. It is marketed to independent landscapers, greenhouses and garden centers throughout the states of Minnesota, Iowa, Wisconsin, North Dakota and South Dakota.

“Composting manure is a step in the right direction in that we are managing these concentrated centers of waste products in a way that is creating value and it is essentially truly sustainable,” says Matuska. “It’s socially responsible, environmentally responsible, and economically responsible. It isn’t just a fad that’s going to be happening for the next five years. This is the direction I think we are heading.”

“There’s a learning curve and anybody can do it if they invest the time, energy, and money into it,” he says. The question is whether or not it is worthwhile for farms whose main focus is on dairy, poultry, cattle or hog production.

“It is another business that essentially would require the same amount of time and commitment as your milk business,” says Matuska. “The biggest downfall of on-farm composting is the assumption that if you make a product, people are going to fall over themselves to buy it. That’s not true.”

So if the goal is to produce a high-quality, stable, and marketable compost product, farmers may want to consider duplicating the model that has evolved between Mississippi Topsoils and Riverview. One concentrates on producing high-quality compost while the other focuses on its milk business and deriving an extra income from selling the raw material needed to make compost to a dedicated compost producer.

Matuska says by taking this approach, it is like hiring a stockbroker to buy your stocks instead of you doing all the research yourself. While the do-it-yourself approach might yield good results, sometimes the best results are achieved by working with an expert.

Located next to the Gold’n Plump poultry business in Cold Spring, Mississippi Topsoils started out by converting poultry bio-solids from this operation into compost.

“We began making compost and quickly discovered that we needed to have a complete line of soil products to be competitive in the market,” says Matuska. So in addition to compost, the company also developed a potting soil blend and a planting mix.

At this point, the owners also discovered a market for a manure-based compost product and started working with some horse stables as a source of raw material. However, that source eventually dried up. Fortunately for the business, that’s when Matuska met Riverview representative Adam Zeltwanger at a trade show. Riverview was interested in finding other markets for the stabilized manure coming from its anaerobic digester. The dairy was producing considerably more of the material than it was using for animal bedding in its dairy operation.

“The significant market for that product is using it as bedding,” says Matuska. “Using it as a value-added soil amendment in the green industry is something new. What’s attractive to them (Riverview) is that they can generate more revenue.”

Riverview operates a 21,000-cow dairy, and four years ago they invested in an anaerobic digester than collects biogas, which is used as fuel for several 1,000-horsepower generators. The power produced by the generators is sold and eventually ends up on the state power grid. It takes 21 days to process its dairy manure through the digester and the process creates enough biogas so that the generators can operate 97 percent of the time. The byproduct that exits the digester is processed through a screw press where the water is separated from the solids. The nutrient-rich water is collected and used to fertilize crops and some of the dry byproduct, or stabilized manure, is used for bedding. The rest was looking for a home, and that’s where Mississippi Topsoils entered the picture.

Matuska says the stabilized manure that he purchases from the dairy is about halfway along its journey to becoming high-quality compost when it arrives at his composting business. The process employed by Mississippi Topsoils takes it the rest of the way. The company produces compost year round.

“The resulting product that Riverview produces has been anaerobically digested, but it still has an ammonia odor to it and it’s still not totally stable for unlimited application in the gardening industry,” Matuska says. “We sell it as is right off the digester to some limited markets, but we also compost it. That opens up almost every market in that our process further stabilizes it. We can bag it and blend it with other materials for nursery stock or greenhouse production.”

What helps Mississippi Topsoils produce a high-quality product is how well Riverview manages its anaerobic digestion process, which provides the compost company with a clean and consistent material that it can then take further and add more value.

Once a load arrives from Riverview, it is placed in a pile inside a building on top of two, four-inch PVC lines with holes in them that are hooked up to a blower. The blower assists in supplying oxygen into the mass, which encourages organisms responsible for converting the manure into compost to do their job in a healthy environment.

“It is essentially an aerated, static pile,” says Matuska. The pile is aerated for a minimum of two weeks and the temperature is monitored to make sure that it stays consistently in excess of 131 F for seven days. Maintaining this heat, produced by the activity of the organisms, further reduces the pathogens in the composted manure.

After this conversion process, the compost is placed into a non-aerated, static pile for curing,“like a good wine or a good beer. The food is running out for the organisms that are working the pile and they basically begin dying off, readied to become plant food,” Matuska says.

From beginning to end, the process takes three to four months before the compost is ready to bag and ship to customers.

Through scientific growth studies and field tests that Mississippi Topsoils has conducted over the past four years on the compost’s value as both a soil amendment and slow-release organic fertilizer, the company has been able to demonstrate its value to their customers. Sales for its compost products have grown by double digits every year over the past four years. Compost sales in the past year alone improved by 20 percent. Matuska says that the compost provides much more than nutrient value to plants. It helps to create high-quality soil and better growing conditions by improving the physical, chemical and biological properties of the soil. Matuska’s degree in Biology from St. John’s University helps him to improve his understanding of how it benefits a soil growing system.

The amount of stabilized manure that Mississippi Topsoils currently purchases from Riverview is being driven by the market, but based on demand so far, the company has high hopes for strong growth going forward. It only started selling the cow-based compost product last year and is on pace to triple its sales volume this year as compared to what it sold last year over the same period.

What has Matuska excited from a business perspective is the potential profit in creating high-quality compost from all the raw material that Riverview can provide. He says the dairy has the potential to be able to provide as much as 1000 truckloads of the raw material annually with each load representing 22 tons of material. This potential high volume of raw material has him and his partner seriously contemplating the construction of a high-volume manure compost production facility right at the dairy. Right now, transporting the stabilized manure 100 miles from the dairy to Mississippi Topsoils’ facility in Cold Spring is having a significant impact on the overhead cost of producing the compost. Matuska says the idea of building a facility right at the dairy has evolved beyond the concept phase and he believes Mississippi Topsoils could have a plant situated at the dairy within three to five years. One of the factors motivating the company in that direction is regulations restricting the amount of compost it can process at its current location.

“There will be a tipping point at which time the market will be demanding more than what we can produce here,” he says. “So that will be the time when we will build the plant closer to the production point.”

He anticipates that at the same time, the company, which currently has three employees, will consider a completely automated bagging system and a completely new line of products, with distribution that includes large, retail box store chains on a regional or even national distribution scale.