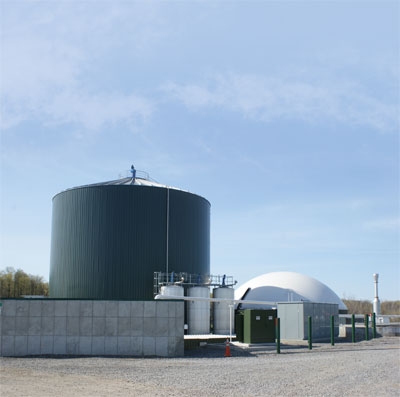 CH4 Biogas LLC built, owns and operates the project under the name Synergy Biogas LLC. The Synergy Biogas LLC plant also is the state’s first biogas project specifically designed for the co-digestion, or processing, of animal and food wastes. The biogas created in the 120,000-gallon co-digester is fueling a GE Jenbacher J420 biogas engine to generate 1.4 megawatts (MW) of renewable electricity.

By anaerobically digesting waste from local food processors in addition to the dairy’s cow manure, the 425 ton per day, mixed-waste facility is more cost-effective. The facility has created about a half-dozen jobs while enhancing the efficiency of the 30-employee farm’s operations and sustaining area food manufacturers and haulers.

The New York State Energy Research and Development Authority (NYSERDA) is providing $1 million in incentives for the facility.

The project is expected to reduce the dairy farm’s base load greenhouse gas emissions by about 8,500 tons of carbon dioxide annually, which is equivalent to the carbon dioxide emissions of 1,700 automobiles. The facility also will produce an estimated 17,500 cubic yards of bedding material for livestock while reducing manure odors and helping the farm manage nutrients applied to cropland.

Through its partnerships with local food manufacturers, Synergy Biogas LLC already has diverted more than 1.14 million gallons of food waste from landfills and wastewater treatment facilities, highlighting another environmental benefit of the project.

“We are excited to launch our new co-digestion biogas project that will optimize the recycling of agricultural biomass waste into a valuable renewable energy resource to help reduce our operational costs,” said John Noble, president and CEO of Synergy Dairy.

According to the New York State Department of Agriculture and Markets, in 2011 the state had 5,300 dairy farms with more than 600,000 dairy cows. However, fewer than 20,000 of those cows were being utilized in energy production, through the use of 17 digesters that produce a combined 3 MW. As of 2011, an additional 17 digester systems were awaiting installation to generate a combined 6 MW.