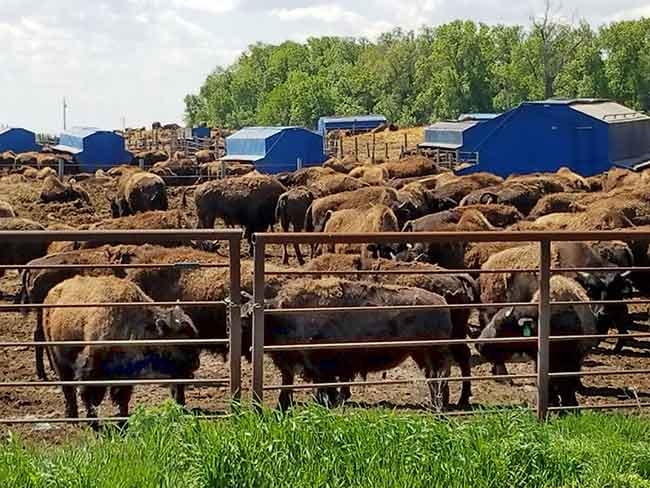 The American bison is making a comeback and a North Dakota-based, start-up company called Bison Compost LLC is hoping this translates into growing sales for their teabag and bulk compost products. Their manure supplier and business partner, North Prairie Bison Ranch (NPBR), hopes it leads to reduced manure disposal costs.

After almost being hunted to extinction, the American bison, or buffalo, has become big business for some Great Plains ranches, and was recently named the National Mammal of the United States.

NPBR manages a 3000-head custom feedlot near Leeds, ND, where they raise the animals exclusively for a single customer. The feedlot is owned by Dennis Sexhus, his son, Sanford, and Keith Kakela.

Bison Compost LLC was formed in 2013 and has three partners: NPBR, Tom and Judy Duenow, and Shelley Mathison-Holmes. Although the Duenows live in Elk River, Minn., and Mathison-Holmes in Winston-Salem, NC, all have roots and past associations with the Leeds area, which is how they found each other to formalize the partnership. The company markets its products under the names ‘Buffalo Earth’ and ‘No. 2 Brew Compost Tea’ for plants.

While he has yet to sit down and crunch the numbers to calculate if composting is delivering a net financial benefit to the bison ranch, Sexhus says they have reduced their number of Frontier hydraulic-push manure spreaders from three to one because the composting process reduces their manure volume by about two-thirds.

Sexhus says NPBR’s main motivations for taking the composting route were to reduce volume, derive a potential extra income from compost sales, and to help out the environment by switching to compost from land applying raw manure. At present, he says all their raw manure is being composted, but only a portion is being sold. The rest is land applied as organic fertilizer for their cash crops until such time as the compost business builds up its distributor network to take all the compost.

“Manure management is a cost for us and is a fairly expensive part of the feedlot business to properly dispose of the manure,” says Sexhus. “We were motivated by trying to turn what was really a liability for us into an asset.”

However, he has a realistic view of the costs associated with converting raw manure into compost.

“I believe that we are benefiting, but making compost isn’t free,” Sexhus says. “This business is fairly new and our goal is to grow it into a viable business. I do know that there are savings, but there are also costs associated with it.”

Prior to the composting venture, the ranch typically stockpiled and land applied its raw manure. It is a combination of animal waste with grass, hay, straw or corn stover.

In addition to substantially reducing raw manure volume, compost also has a lot less odor, and is largely free of weed seeds, pathogens, and fly eggs. These are some of the main selling points of compost, not to mention its benefits as an organic plant food where it increases fertility, water-holding capacity, bulk density and biological properties.

Describing the manufacture of the bison compost as a “warm weather” endeavor, Sexhus says the accumulated manure from the pens is stockpiled and then put into windrows on a designated, 10-acre, drainage-controlled, composting site provided by the bison ranch next to the feedlot.

Tom Duenow says his career as a food business manager brought him considerable experience in recycling, so the idea of recycling manure into compost had some appeal to him. Also, his wife, Judy, had a strong connection to the North Prairie area of North Dakota, having grown up within a couple of miles of the NPBR feedlot. Her family had close family connections with the bison ranch’s owners. Judy also had experience as a business partner with Dennis Sexhus, raising bison in the 1990s before selling out when prices went south.

“I started a conversation with Dennis about the possibility of composting and we just rolled it back and forth for a year or two,” says Duenow. “In 2013, we decided to create a partnership and start composting the bison manure.”

Mathison-Holmes spends a lot of time in North Dakota and is a strong advocate for women becoming more involved in business. Her family comes from Fargo. She was interested in becoming involved in a recycling business that created value-added end products like compost. In fact, she started a venture in manufacturing and marketing bison compost but lost her source of manure. So she reached out to the Duenows and became part of the Bison Compost partnership.

The owners did not have a lot of experience manufacturing premium quality compost, so they turned to the U.S. Composting Council and the North Dakota State University (NDSU) Extension service for technical assistance. They credit individuals like NDSU livestock environmental specialist Mary Berg with providing great and ongoing assistance in helping to launch their business venture.

Using an excavator, dozer, and front-end loader from the ranch, the feedlot manure is piled into 200-foot-long windrows on the composting site that are 12-feet wide and 8-feet tall. The site has enough room for 15 windrows as well as room for expansion. Temperature is the critical benchmark measured when manufacturing compost and it is measured frequently. The piles are allowed to heat up to 160 Fahrenheit three times. Each time it reaches that temperature, a Vermeer CT612 compost turner – owned by Bison Compost – turns the piles. After turning, the piles cool down then heat up again. The heat is generated by the microbes within the windrows doing their job of converting the manure into compost.

“I like to say that it is kind of a natural pasteurization process,” says Duenow, adding this is how and when the toxins, fly eggs and weed seeds are destroyed.

After turning three times and the heat stabilizes at a lower temperature, the compost piles cure for four weeks. The entire process takes between two and three months.

The black compost is screened to 3/8-inch consistency through a screener supplied by PowerScreen – located in Rogers, Minn. – before being sold in bulk or loaded in small quantities into teabags. Because of the seasonality of compost production, the company rents the screener once it has a large amount of compost accumulated. Timing the production of compost to stockpile for the entire year is an important part of the planning and marketing process as no compost is produced during the winter yet there may be demand for compost from plant enthusiasts.

What Mathison-Holmes brought to the business was the concept of a unique ‘teabag’ compost gardening product. This is a small amount of compost packaged in a teabag. It is dipped in water for about 24 hours and during this steeping process, the compost nutrients are released and ready to use as organic plant fertilizer.

While Bison Compost LLC is still in its infancy, Duenow says the owners have already learned some important marketing lessons. Perhaps the most important is the decision to sell their bagger and focus on selling large quantities of the bulk product to other companies who then bag it under the Buffalo Earth name. Part of the challenge they face is being situated in North Dakota, which is quite some distance to market with a limited labor pool. That’s why for now, the company has focused on marketing its compost in bulk both locally and over longer distances as well as marketing it in smaller, more manageable quantities as the No. 2 Compost Tea product.

In addition to giving the environment a hand-up by converting the raw manure to compost, Bison Compost is also providing much needed employment for a local organization that works with handicapped individuals. They have the contract to package the No. 2 Compost Tea product.

The Duenows and Mathison-Holmes continue to work hard on the marketing front to attract interest outside their local area, and so far, their marketing strategy has worked out quite well. They have sold a large volume of compost to a landscape products company in Minot, ND, which is blending it to create potting mix and garden mix for its customers. Bison Compost also has nursery and garden distributors established in Minnesota, North Dakota, South Dakota and Northern Iowa, as well as a distributorship established for six states around New York.

Last year, the company produced about 1.5 million pounds of compost. Duenow says they generated about $30,000 in sales and they hope to double that amount this year as well as make good progress on establishing a national market particularly for the teabag product. Their target audience is nursery owners, gardeners, individuals involved in soil remediation and reclamation, as well as gardening enthusiasts.

While there is no difference in the process of manufacturing compost from bison manure or cattle manure, Duenow says they are hoping to leverage their sales to some extent on the growing profile of the American bison itself. They are also hitching their wagon to the green movement, promoting their product as a natural alternative to commercial fertilizer, from a source where the animals are raised without hormones or antibiotics.

To support the start-up, Bison Compost received a $135,000 grant from the North Dakota Agricultural Products Utilization Commission, and Duenow says a considerable amount is being used in their ongoing marketing efforts.

“Our name and our product are really gaining more and more interest,” he adds. “It is so much fun to go to shows like Pride of North Dakota and have people come back again and buy our product.”