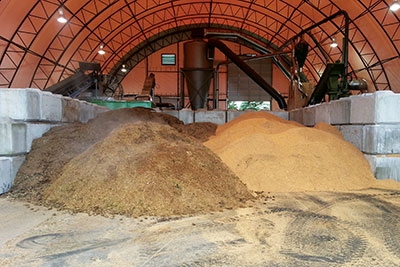 A British Columbia company called GSA has developed a patented method to convert used horse bedding to recycled horse bedding where the manure has been removed and remaining wood fiber sterilized. The bedding can be reused up to 20 times. Contributed

Disposal of manure-laden bedding is a constant challenge and a significant expense for equine facilities like racetracks, horse farms, and equestrian centers. A British Columbia company called GreenScene Agritek (GSA) has commissioned a first-of-its-kind commercial-scale horse bedding recycling plant that it feels will solve the problem.

Not only does the company’s technology safely separate out the fecal matter and urine in the used bedding, but the remaining wood shavings or wood pellets are processed into a marketable product – namely, a recycled bedding material that Chilliwack-based GSA believes is a better alternative in some ways to natural wood shavings and pellets.

To put the used horse bedding disposal situation into perspective, GSA estimates that a stabled horse produces about one tonne per month of used bedding. In North America alone, there are an estimated 10 million horses. Typically, horse bedding in many equestrian facilities consists of about 80 to 90 percent wood shavings or pellets, which is about double what is used for bedding in a poultry operation. GSA says that the horse industry in North America currently spends conservatively $4.5 billion per year in bedding materials and manure disposal.

The commercial recycled bedding plant is located in Delta, B.C.

GSA general manager Paul Cross says the commercial recycling plant is the culmination of work started by company founder Phil Wilford and his team – Steve Godley and Jim Klemm – who developed a solution to separate manure from equine wood fiber bedding. After a few years of trials using a small prototype, a new management team arrived with the financial backing to build a full-scale prototype, which was completed in July 2012.

“The prototype worked and proved out the concept,” says Cross. “Working with experts in refinement, extraction and cleansing of wood residuals and manure, they reviewed the whole system and redesigned it for commercial application, profit and to provide excellent opportunities for co-partnership owners.”

The plant retrofit was completed in June, “and is already proving itself to be a viable waste management recycled bedding facility,” says Cross.

The company is currently in serious negotiations with a municipal council in Ontario for the construction of its second commercial plant, and Cross says the plan is to build eight plants in Canada and 23 in the United States over the next five years, as the company rolls out its technology to a global audience.

The GSA-2000 plant is capable of producing five bone dry tonnes (BDT) of recycled horse bedding per hour, or 495,000 bales of wood fiber bedding per year.

In the process of recycling the used bedding material, nearly all pathogens are destroyed as well as fly eggs, meaning that facilities that use the company’s recycled bedding material also witness a drastic reduction of flies, which can be disease carriers and an annoyance to the animals.

GSA says its recycled horse bedding product is unique, offers the opportunity for equestrian centers to reduce their costs by operating a GSA system to provide for their own horse bedding needs and creates a marketable product. It is described as having a lower moisture content than standard wood fiber bedding as well as increased absorbency and ammonia control. It can also be recycled and reused at least 20 times.

The GSA technology at present is specifically geared to recycling used horse bedding, but according to company founder and director Phil Wilford, there may also be opportunities to use the technology to recycle used bedding material from other agricultural industries.

“In 2004, somebody from the federal agriculture department said if you want a problem to solve, have a look at horse manure,” says Wilford. The problem was with disposal on the one hand and procuring enough shavings and sawdust bedding material on the other.

When he conducted an initial investigation to see what technology had already been developed to address this problem, he discovered that nothing was available. However, Wilford was convinced that there was no reason why a system that combined both extraction and recycling couldn’t be developed. He began trying various methods based on his experience, which included modifying the technology used in a portable sewage sludge machine for separating out contaminants from solids. He eventually developed an apparatus, application and overall system for the cleansing of fecal matter and urine and then the recycling of used horse bedding that has been granted a United States patent.

Bill Boesterd, newly appointed president of GreenScene, with more than 30 years’ experience in the agricultural bedding industry, plus owner of Denbow Transport, a leading supplier of animal bedding and environmental solutions in the Fraser Valley, says the company has purposely worked slowly and methodically to develop and test the patented technology to ensure that it can substantiate the claims that it is making as to the quality of the recycled product.

At present, it is working with researchers in B.C., the Western Veterinarian College in Saskatoon, Sask., and the University of Guelph, Ont., to further validate the process’s ability to kill pathogens, mold spores and other substances as the company works to roll out the technology to a global audience. However, Boesterd says that GSA is already very confident in the quality of the product based on the testing and validation that was conducted through several years of research and development and the feedback it has received from test facilities, which have used variations of the recycled bedding since 2008.

Over the past year, GSA has received financial support totaling over $300,000 from the Canadian government through its Industrial Research Assistance Program (IRAP), Investment Accelerator Fund (IAF), and the Natural Sciences and Engineering Research Council to advance the commercialization of its technology.

The company describes its system as using a combination of hoppers, augers and electrical motors to refine, extract, cleanse and repackage the recycled bedding, having destroyed the vast majority of pathogens and mold spores in the process. The used horse bedding has to be wood based for the process to work properly. It is a method where the contaminants are separated out and the wood fiber is recovered, using a unique, computer-controlled system. Once separated out, the assorted organic fines consisting of manure, wood and organic dust can be sold as a soil amendment or wood pellet additive.

“One of the big problems that the equestrian centers have is mold spores,” says chairman and CFO James Paradis. “They cause respiratory problems with the horses. They’re the toughest nuts to crack.”

A major contributor to mold spore growth is moisture. The GSA recycled horse bedding has a lower moisture content than such materials as natural sawdust and shavings.

The process is also described as “carbon reduced” because it is a closed loop system that does not create any carbon dioxide or carbon monoxide off-gases released to the atmosphere.

Plant construction costs have been estimated by GSA at $2.5 million, based on a plant with an output of about five tonnes per hour, which Paradis says represents an excellent cost recovery period of about three to four years. This cost does not include the cost of the land requirement of about an acre for each facility. The plant itself takes up about a half acre, while the surrounding land attached to a plant is used primarily for indoor storage of the used horse bedding and the end baled product.

To support five tonnes per hour of production, the GSA-2000 plant requires a used horse bedding supply from between 1,500 and 3,000 horses.

“Having a plant in a centralized equine area or on a racetrack with roughly that many horses, that’s where the economics really work out well,” says Paradis.

Transportation of the used bedding material is a critical factor when selecting a plant location. At present, many larger equestrian centers are paying to transport their used horse bedding for disposal in such locations as landfill composting sites as well as blueberry and cranberry fields, in B.C.’s Fraser Valley.

“They have to truck it anyway, so we have made arrangements with haulers that rather than just stockpiling it somewhere, they can bring it to our facility and that gives us our feedstock,” says Paradis, adding that material trucked from about a 50-kilometer radius is probably the most viable.

GSA’s horse bedding recycling system has already garnered considerable attention in North America and Europe. In its plan to construct more commercial plants, the company is pursuing a co-ownership joint venture model, which would allow GSA to be involved in the operation of the plant to ensure that the equipment is operated properly and that the sold equine bedding meets its standards.

In recognition of its technological accomplishment, GSA was recently awarded first prize in the B.C. Innovation Council’s New Venture Competition for the Agri-Tech sector.