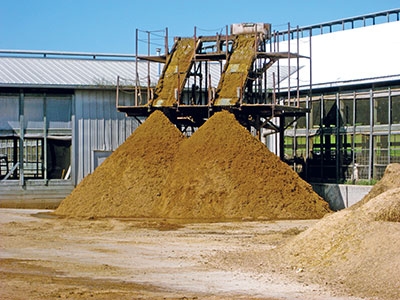 Manure solids from the Rosenow Dairy collect on a weeping pad after being separated from the liquid stream through a Key Dollar separator. contributed

It’s spring at the Rosenholm Dairy in Waumandee, Wisc., when the snow melts. The robins start chirping, and the half-ton trucks start pulling up to the dairy’s gate to purchase compost and potting soils produced from its cow manure solids.

Compost sold under the brand name Cowsmo Compost has been produced at the dairy since 1990, and there have been years when the net revenue from this side of the business has been greater than from the dairy.

There are about 1,000 animals at any one time on the dairy owned by fifth-generation farmers, John and Nettie Rosenow, with 550 milking cows, all situated in three barns. The herd generates about 14 million gallons of liquid manure annually, which separates out to about 20 million pounds of organic matter and a high nutrient liquid stream that is stored in lagoons and land applied as organic fertilizer. The separated solid gold produces between 10 to 15 million pounds of compost and potting soils, sold year round to a variety of retailers, wholesalers, and direct customers primarily throughout the American Midwest.

The Rosenows first started making compost instead of land applying their manure after a barn fire in 1990 because they only had about half the cropland they deemed they needed to safely dispose of their raw manure through land application. They put about 1,000 acres into corn, alfalfa and cover crops for feed, with about 700 acres close to the dairy. They calculated that they’d need about three acres per cow to safely land apply their manure. This meant that they’d have to access about twice as many acres as they owned. Reducing their raw manure output by composting has helped the dairy avoid what John describes as “bidding wars for rents” because they have enough farmland of their own to spread their separated liquids and for disposing of their manure during those months when it is too cold to make compost.

Initially, they gave the compost away for free. Then the price went up to $5 a pickup load. Today, it sells for about $67 per pickup load and they are having difficulty keeping up with demand. So John says that they are actively in the process of establishing another composting site with another dairy to ramp up production.

“We know that we need to continue to grow and we want to do that, but we are doing that on the compost side,” says John.

Manure disposal through composting has benefitted the dairy in a number of ways. First, it removes the manure nutrients from the farm so it requires less land for manure disposal.

“Manure becomes less valuable the farther away you haul it and we would have had to haul farther away,” says John. “Now the farthest we haul the manure is about a quarter of a mile to the compost site.”

Secondly, they have acquired a new skill set for making compost and potting soils as well as selling it, which has developed a new income stream for the dairy.

Thirdly, John says that developing the composting business has been a very enjoyable experience.

“In the process of marketing our compost, we meet very intelligent and very exciting people, and that’s a lot of fun,” he says. “Every spring, when the snow goes away, we start having people come with their pickups and their trailers to get compost. They are all very happy because spring is here and they can garden and that’s been fun as well.”

And in the final analysis, it’s also been profitable for the dairy.

During each milking, the barn alleys containing the mixture of raw manure and bedding are flushed using recycled lagoon water to a centralized collection tank where an agitator and a submersible Flygt discharge pump are located. The pump transports the mixture across a Key Dollar incline screen separator. The separated liquids travel by gravity to the six million gallon, three-stage lagoon. The separated solids collect on a weeping pad and are blended with drier waste like that collected from the maternity barn to achieve the correct moisture content for composting, and from there the mixture is loaded into a New Holland apron beater spreader and transported to the composting site.

The Rosenows take their production of compost very seriously, having taken the training to learn how to properly convert their herd’s manure solids into compost and through a couple of decades of on-the-job training to fine tune their approach. The result has been the development of a tried and true method and a focus on four specific potting soil blends, resulting in high quality products manufactured with just the right amount of affordable sweat equity from farm labor. At one time they had a full-time person dedicated to compost production. Now they are able to accomplish the same end product with four hours of labor a week based on the knowledge they have acquired.

Speaking about their approach to compost production, John says, “it’s partially an art and partially a science, and you need both of them . . . you have to have a proper carbon and nitrogen ratio so that it doesn’t get too hot and also so that it does heat. We manage that.”

Over the years, they have expanded their product lines and have even teamed up with Joshua Frye, a West Virginia poultry farmer who is producing biochar and syngas from his poultry manure.

“I was interested in the carbon sequestration part of biochar, where it would sequester carbon by putting it into the soil and keep it there,” says Rosenow. “It’s a very tight and porous carbon molecule and it has some agronomic advantages, so we thought that was a pretty good fit, especially with our customer base.”

The organic material the Rosenows use to manufacture their compost is a combination of the pine shavings bedding that they use in the barns and cow manure solids. They have taken this bedding approach because there is a readily available supply of pine sawdust from a nearby Ashley Furniture manufacturing plant, which delivers three semi truckloads of sawdust per week. They don’t use any of their manufactured compost as barn bedding or as an organic soil amendment on their cropland because John says it is just too valuable as a saleable commodity.

Rosenow adds that manure composting was a novel idea back when they adopted it in 1990 and to a great degree is still a novel idea among confined animal feeding operations (CAFOs) today. By far the biggest job and challenge in this business endeavor has been marketing, which he says has been and will be the key to success for any compost producer.

“We always tell our customers that the two things we sell are products and service,” says John.

Compost production occurs on a specially selected, 3.5 acre, blacktopped site about a quarter mile from the dairy, engineered to primarily control water runoff from the site. The runoff collection system consists of a reception area that settles it out and stops the flow.  After a heavy rain, it will fill up and then discharge through a filtering system that consists of gravel and cement. It travels across a grass filter strip that consumes the nutrients from the discharge before it ends up in the stream.

This has helped to protect the integrity of the nearby trout stream and the site has been approved by the Wisconsin Department of Natural Resources.

The manure solids transported by the beater spreader from the weeping pad at the dairy to the composting site are placed in windrows measuring about 300-feet long, 6-feet high and 14-feet wide. Actual compost production takes place over about 10 months from mid-March to mid-December. During the non-production, two-month interval, the raw manure solids are land applied because the air temperature is too cold to produce compost at that time, and, throughout the year, about 800 acres farmed by the dairy does have manure applied to it.

The natural conversion process from raw manure to compost occurs through carefully timed mechanical turning and monitoring of important parameters such as heat and moisture content within the windrows. The Rosenow dairy uses a Scarab, self-propelled compost turner in their operations. The piles are turned on average about 15 times and the compost is typically ready for market in about three months.

They sell potting soil blends year round and have customers that pick up a “significant amount” every three weeks, meaning that the dairy derives some income from this area year round. Compost sales take place typically from February to the end of November, with demand dictated to some degree by geography. It will first start further south and move north as the weather warms up in spring.

Rosenow says they have to carefully balance their marketing effort with how much product they can supply, which explains their plans for expansion.

“We’re actually making a product that people want,” says John. “We’re not just trying to get rid of something. You can’t tell by looking at it where it came from, it has no smell, it’s stable, and you can apply it to any kind of growing crop  . . . now I think it is safe to say that we probably produce the best compost that you can buy in the upper Midwest and our customers agree.”