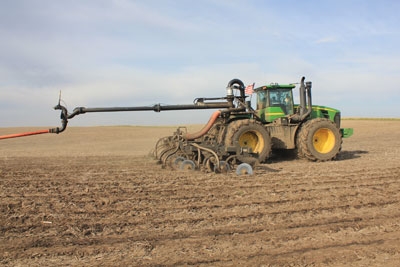 Concerned about the cost of operating and monitoring drag hose systems, the cost of unexpected pump shutdowns, and the cost of labor for each drag hose crew? There are now mobile apps to help deal with that as long as there is reliable cellphone coverage to support it.

Mobile communication technology is now available to custom manure applicators using drag hose systems to monitor and adjust the performance of pumps on each setup using either software operating on a tablet device, laptop computer or on a smartphone.

While the mobile app technology related to pumping operations is not cheap, the benefits are that they give company owners and managers the ability to monitor and adjust the performance of drag hose systems without being present and from a great distance.

Wisconsin custom manure applicator Ernie Sundstrom says it cost him about $18,000 to install the communication hardware for each pump but, by using the technology, he needs fewer workers on each drag hose crew to get the job done. This saving in salary alone has easily paid for the installation. He began using his mobile communication system last fall and, at present, has three pumps equipped with the technology. He is working to equip a fourth.

Sundstrom and his brothers, Willie and Jordan, own Sundstrom’s Pit Pumping located in Colfax, Wisc., about 70 miles east of Minneapolis/St. Paul, Minn. They offer custom manure transport and application service using drag hose systems, tanker trucks, semi tankers and frac tanks. Their fleet consists of five, 4,600-gallon tanker trucks, three drag hose systems, a conventional dredge and two stirring dredges. They also offer solid manure transport and disposal and have an industrial waste disposal service. The company has been in business since 1994. They have 30 employees and five crews.

Sundstrom worked with Ben Puck from PCE Manure Equipment in Iowa to provide him with his pump communication and control system. It is manufactured by a company called Mobile Star and Sundstrom Pit Pumping has subscribed to the online communication service provided by Mobile Star to stay in communication contact with their pumps. The system consists of a communication unit on a pump that is connected to the electronic control module (ECM) connection on the engine that powers the drag hose setup. Sundstrom described it as essentially a plug and play system where he plugs the pump communication unit into the ECM on the engine and he is ready to go to work. By simply connecting to the Mobile Star website using his tablet with his user name and password, he is able to receive data and send instructions as needed to each equipped pump. He is able to both monitor and make pump adjustments using his Zoom tablet provided by Verizon, but Sundstrom says he can only monitor the system using a smartphone.

“The ability to monitor what the system is doing faster than the human eye can was very appealing to us,” says Sundstrom. “Now, we can have one employee run three or four pumps instead of having four guys out there, and our reaction time is actually faster. The other nice thing is that I could be sitting on the beach in the Bahamas and by pulling up my laptop and logging in to the Mobile Star site, I could be looking at what my guys are doing in northern Wisconsin or northern Minnesota.”

With the relatively short manure application window each year, the ability to closely monitor and make adjustments in real time over long distances has the potential to deliver a significant efficiency dividend. It means less travel for owners and for onsite crew members responsible for monitoring pump performance. As he was being interviewed, Sundstrom was supervising one of his drag hose crews and monitoring the system’s pump performance on his tablet from the cab of his truck.

“I can see all three of my crews’ pumps on my tablet,” says Sundstrom. “I can see what they are running for rpms, gallons, pressures, everything. I can also adjust those pumps from my truck.”

PCE Manure Equipment owner Ben Puck says they use the mobile communication equipment themselves and have been offering it to other custom applicators for about two and a half years. They commissioned Mobile Star to build the system around PCE Manure Equipment’s specifications. They have equipped about 100 pumps with the system, and of the 15 pumps sold this spring, only one did not have the mobile communication equipment installed. The full capabilities of the communication system are the ability to read the inlet and outlet pump pressures, read the digital signal from the Krohne flow meter, start and turn off the engine, vary the engine rpm by 25 rpm increments, prime the pump, change up to three flow gates, and protect the line from spot pressure spikes. Other features include monitoring the engine oil pressure, fuel consumption and engine hours.

“The system will soon have the ability to dump the information onto an Excel spreadsheet to tell you how many hours the system ran, how many gallons of fuel were burned, and how many gallons were pumped on a particular job,” Puck says.
The ability to monitor and control manure pumps with either a tablet or smartphone device could revolutionize day-to-day operations for custom manure applicators.

“This really is a new phenomenon that has grabbed hold in the last six months,” says Kevin Erb, conservation professional training co-ordinator with the University of Wisconsin. Among his responsibilities is working with the for-hire manure application industry across the American Upper Midwest.

“It wouldn’t surprise me if a year from now, use of this mobile app technology went from only five percent of the applicators in Wisconsin to more than 50 percent,” he adds. “I think the potential for growth is there. The only thing holding it back is that the industry isn’t aware that these types of applications are out there – from draglines to tracking tankers in the field.”

In states like Wisconsin, custom manure applicators land apply about six billion gallons of dairy manure alone per year. Companies range from applying a few hundred thousand gallons to as much as 500 million gallons per year. Some have as many as seven crews in the field working at different locations all at once.

“For a lot of our Wisconsin dairy operations that are in that 100- to 150-cow range, a custom manure applicator could have crews working in three different counties on three different farms at the same time,” says Erb.

The ability to idle up or idle down pumps using radio-controlled devices has been available for over a decade and pumps are now typically outfitted with Murphy switches that automatically shut down the system in the event of a pressure change resulting from a blockage or leak. While this safety innovation works well, it can take a considerable amount of time to restart the system once a shutdown occurs. New mobile app technology can be set up so that it alerts the custom manure applicator of a potential problem at a distance, allowing him to react and make adjustments before the system automatically shuts down. Given this capability and the costs associated with unexpected downtime within a short production window, Erb adds, it’s little wonder that the custom manure applicator industry is quickly embracing this communication technology.

In terms of troubleshooting, Sundstrom had a recent experience where he had six pumps working in line with the last pump computer controlled and connected to his tablet. From 20 miles away, he noticed that the pressure was going up.

“I knew I had a problem and it turns out that the tractor operator had hit a lever in the tractor that had closed off one of the valves,” he says. Recognizing the problem before it turned critical, he was able to make a call, troubleshoot the problem, and save a lot of time repairing what would likely have resulted in a blown hose.

The development and availability of purpose-built, mobile apps specifically for the custom manure application industry is very much an evolving landscape. Erb says it has really been fueled by the greater proliferation of mobile devices and smartphones. Software developers with an understanding of the communication power of these mobile devices have started creating applications aimed specifically at the custom manure application industry.

Spokesman for drag hose system provider Hydro Engineering, John Hochstein, says it is working with another company to explore the potential of making apps available for use on mobile devices with its system, but currently provides its customers with an FM radio communication system. It allows customers to start, stop, speed up and slow down pumps, as well as put the clutch in and out on the system engine. One challenge that the company has noted so far with an app system is the occasional unreliability of cell coverage in rural areas that customers would have to rely on with a mobile app type system, which is why the company is providing a more reliable FM radio communication system at the present time. Another concern is the potential cost of a mobile app control and communication system.

Puck acknowledges that his system is not perfect from the cellphone coverage standpoint, but the company has taken a few measures to minimize the problem. The system uses a five-watt antenna versus a quarter-watt antenna on a cellphone. Also, the system uses digital technology, which is the same technology to send text messages not voice messages. The company can also place 12-volt enhancers around the pump to improve the signal strength.

“It’s not perfect, but by the same token I haven’t seen anyone throw their cellphones away because they can’t get service all the time,” says Puck.

Attendees of this year’s North American Manur Expo, being held Aug. 22 in Prairie du Sac, Wis., will have an opportunity to learn more about the various options that are currently available to custom manure applicators. A presentation has been dedicated to this specific topic, featuring current users of the technology and their experiences with it. The planning team is considering live demonstrations of mobile apps.