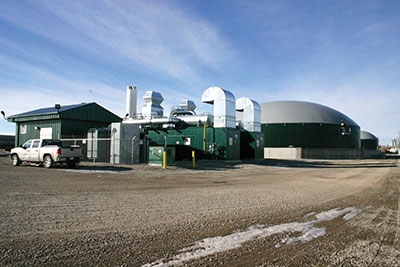 The Lethbridge Biogas installation has been constructed to minimize odor coming from the facility, where it processes manure and commercial organic waste to produce biogas. Contributed

An abundance of manure in the vicinity of Canada’s largest anaerobic digester made the $30-million project viable but fees collected from Alberta’s largest greenhouse gas emitters made construction of this new, state-of-the art co-generation facility near Lethbridge possible.

Biogas is produced from three digesters operating at the facility, which is used as fuel to produce electricity. The project is owned jointly by St. Catharines, Ont.-based, PlanET Biogas and Alberta-based, ECB Enviro North America Inc. The joint venture is operating as Lethbridge Biogas LP.

PlanET Biogas Solutions, a biogas design and construction company is a subsidiary PlanET Biogastecknik headquartered in Vreden, Germany. It has constructed over 300 biogas plants worldwide. The Lethbridge facility is the largest PlanET Biogas has built
in the world.

“It’s potentially the most technologically advanced, privately held biogas plant in the world today,” says Thane Hurlburt, president of Lethbridge Biogas. “We can operate the entire plant with an iPhone.”

The co-generation equipment supplier for the facility was Germany-based 2G ENERGY AG.

It will produce about 2.8 megawatts (MW) of power, which is being sold on the province’s open market. The owners already plan to expand the facility by 50 percent over the next two years to produce 4.2 MW. The plant also generates about 100,000 gigajoules of thermal energy, with hot water used to heat their internal systems of 12 million liters of digestate.

The biogas produced from the digesters is burned as fuel in two engines that power two electrical generators hooked into the power grid. A third engine will bring production up to 4.2 MW.

The digesters will process over 100,000 tonnes of raw material annually. More than 50 percent will come from manure collected from southern Alberta farms. Of that, the majority will come from dairy farms, with additional inputs from hog and poultry operations. The technology chosen for the project is geared toward processing liquid manure, with the ability to process a certain percentage of solid matter in suspension along with it. The goal is to achieve 95 percent consistency of the mix of digester inputs over time so that biogas production is predictable and constant.

“The vast majority (of inputs) is manure from dairy because we have a wet anaerobic digestion system,” says Hurlburt. “So we want our total solid content to be about 10 percent through our digesters.”

He says with on average solids content of six to 10 percent in the dairy manure, this provides the opportunity
to add some poultry manure, hog manure, plus other organic waste to the input mix.

To finance the project, the owners received $8.2 million from an organization called Climate Change and Emissions Management Corporation (CCEMC).

Hurlburt, a southern Alberta rancher, researched and developed the project over more than a decade and says it could not have gone ahead without support from organizations like CCEMC.

Unique to Alberta, which is noted for its extensive greenhouse gas contributing fossil fuel industry, CCEMC is a not-for-profit corporation with a mandate to fund projects that reduce greenhouse gas emissions and help Alberta adapt to climate change. Funding for the organization is collected from industry. Since 2007, facilities that annually produce more than 100,000 tonnes of greenhouse gas emissions are required to reduce their greenhouse gas intensity by 12 percent relative to an historic baseline. Paying $15 into the CCEMC management fund for every tonne over the reduction limit is one compliance option industry has. Despite its reputation as a greenhouse gas generator, which contributes to global warming, Alberta is the only jurisdiction in North America that requires its large emitters to pay a fee should they emit greenhouse gases above an established threshold, with the funds going toward greenhouse gas reduction projects. Some of those funds were used to support the Lethbridge biogas project.

The project also received $6.4 million from the Alberta Energy Department, and a $5-million loan from Alberta’s Agriculture Financial Services Corporation.

At power output of 2.8 MW, the project will provide enough power for 2,800 homes and is expected to reduce greenhouse gas emissions by more than 224,000 tonnes of greenhouse gas equivalent by 2020.

Given his local knowledge, Hurlburt says that southern Alberta was a natural choice for the location of the digester because of the large number of confined animal feeding operations (CAFOs) located in that part of Canada.

“The County of Lethbridge is the cattle feeding capital of the country. I believe that 40 to 50 percent of the fed cattle are fed in this county,” Hurlburt says. “That, along with other CAFOs being centered in the County, there is no question that there is a plethora of input materials on the manure and agricultural side.”

The area also has a large number of farm produce-type agriculture businesses and food processing facilities. For example, a number of area farms produce potatoes on contract for companies like McCain Foods, Lamb Weston and Frito Lay, there are a number of canola processing plants, and even a distillery. The combination of the CAFOs, produce farms and food processing facilities generates a large amount of organic waste material that breakdown well for biogas production in an anaerobic digester.

“There is great potential for partnerships with county producers to use agricultural byproducts to generate sustainable energy,” says Lorne Hickey, Lethbridge County Reeve.

Given his local knowledge of the amount of organic waste being generated in the area, and then his involvement in the concrete industry, which was looking for new ways to use concrete in agricultural applications, that’s what led Hurlburt down the path of researching the development of a biogas production facility in his part of the world. He made a number of trips to Germany, which is a leading developer of this technology. That put him in contact with Stefan Michalski, a German engineer employed within the biogas production industry. Michalski moved to Canada, has been instrumental in advancing the Lethbridge biogas project, and is now a director on Lethbridge Biogas.

The company collects liquid manure from area dairy farms and processes it through the three digesters. The high nutrient, liquid byproduct stream is returned to the lagoons and land applied as organic fertilizer.

In addition to selecting the appropriate digestion technology and investigating ways to dispose of the byproducts, Hurlburt says lining up sources of raw materials has been among the biggest challenges to making the project a reality, and it has required a lot of patience among potential local suppliers.

“We had a bit of a ‘Field of Dreams’ ideology – if you build it, they will come,” says Hurlburt. “And that’s finally starting to happen. After approaching people for 13 years, they start to wonder if you are ever going to do what you say you are going to do.”

What’s helped Lethbridge Biogas secure consistent sources of raw material is that many of their suppliers like the idea of supplying their organic waste to a renewable green energy plant in a complete closed loop rather than, in some cases, taking it to a landfill.

Lethbridge Biogas has signed five-year agreements with its manure suppliers and does not pay for the raw material. It generally does charge a tipping fee for collection of inputs from commercial suppliers. The company uses a fleet of trucks to pick up the raw inputs and deliver the liquid byproduct from the digesters back to the dairy lagoons.

The digestion process is continuous, with a retention time in the tanks of about 35 days. Each tank has a four million liter holding capacity. The temperature in the tanks is maintained at between 35 and 40 Celsius to ensure quality biological activity and biogas production. The system has been designed to maintain that temperature despite outside temperatures in the Lethbridge area typically reaching minus 40 Celsius numerous times in winter. The bacteria working in the tanks are the same bacteria that work in a cow’s rumen.

There is onsite storage capacity for raw solid inputs and three tanks capable of storing over two million liters. When picking up the liquid manure from dairies, the goal is to collect it when it is as fresh as possible. To accommodate the biogas facility, many dairy suppliers have installed a plug within their liquid manure pipelines leading to their lagoons. A biogas plant vacuum truck comes by, typically once a day, picks up a load of liquid manure, delivers it to a storage tank, and then takes a load of processed liquid manure from the 5.8 million litre post-storage tank back to the pipeline plug for deposit in the dairy lagoon.

“Where the big plus comes for the dairy farmer is when we install a thermo-hydrolysis unit at the end of this year,” says Hurlburt. “It is a Canadian Food Inspection Agency (CFIA) approved technology for the destruction of specified risk material such as prions that cause bovine spongiform encephalopathy (BSE).”

This is also known as mad cow disease. What this means is that this facility will be able to dispose of all cattle mortalities, including those cattle or cattle parts that are suspected of carrying BSE, and this ground up material will be digested to produce biogas. The benefit to Lethbridge Biogas is that it produces about 10 times the amount of biogas per cubic metre as standard inputs, but processing of the material must be monitored very closely.

Because the system is designed for liquid manure, the company avoids receiving manure from dry feedlots because of its high solids content. Hurlburt says there is better pre-processing technology for that type of manure, which has been developed right in Alberta, specifically by a company called Himark Biogas, operating as Highland Feeders in Vegreville, Alberta.

As one of several investments planned for the facility, Lethbridge Biogas intends to install a pelleting plant in 2015 to process separated solids captured from the digestion process, which can be used as a solid, pathogen free, organic fertilizer.