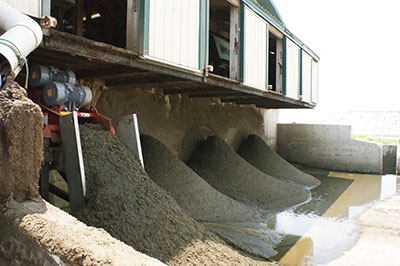 Using the three-stage systems Fair Oaks can remove 98 percent of the sand from the manure; the last two percent is so fine that it can make its way through the digester. Marg Land

At Fair Oak Farm in Fair Oaks, Ind., they get a lot more out of their cows than just milk.

Not long ago, the farm began using compressed natural gas (CNG) to run their fleet, the same CNG produced from their digester. Because Fair Oaks is a large farm — 32,000 cows — they can produce enough CNG to fuel their fleet of 42 milk tankers. In fact, the fuel they are using is replacing more than two million gallons of diesel fuel a year and significantly reducing the farm’s carbon footprint.

Mark Stoermann, project manager at Fair Oaks and director of operations for ampCNG — a transportation logistics company that operates the vehicles for Fair Oaks — has been there from the start. Discussions regarding the $12 million project began about four years ago. Stoermann said it was a decision based on economics.

Fair Oaks case has a large, centralized DVO digester, which is 275 feet by 300 feet and hold 6.2 million gallons. To get a sense of its size, imagine three football fields lying side by side.  Manure is brought in from the farm’s dairies, which adds up to about 500,000 gallons of liquid manure a day.

Typically, farms with digesters produce energy to run the farm and then sell the rest back onto the grid. Stoermann says creating solely electricity wasn’t feasible for Fair Oaks. The farm was using about one third to power its 10 barns, cheese factory, café, gift shop and movie theater, but that still left two thirds.

“It would have to be sold to the grid, and that actually would have lost us money.”

CNG as an option
The farm looked for other opportunities for using that extra energy and CNG started making sense. To make it work though, it would require multiple partners. In this case, they were ampCNG, Kroger, Indiana’s Office of Energy Development, the U.S. Department of Energy’s National Clean Cities program, among others.

“We had all of this milk that we were hauling every day, so we were able to put together an agreement with Kroger that they would take milk on CNG to reduce the carbon footprint,” explains Stoermann. “So, we started to work with truck suppliers and working with Kenworth and Palmer trucking and the Ruan Trucking Company. We were able to put together a structure where AMP leased the trucks and then AMP leased them to Ruan who runs them for the dairy to the Kroger plant and buys the fuel from the AMP stations that Clean Energy built.”

From barn to digester
The process for creating the CNG to fuel these trucks is very similar to creating power. It begins with manure being collected, screened and fed into the digester.

Collection at Fair Oaks entails vacuuming the manure and delivering via tanker to the digester.

“We don’t pump the manure very much at all,” says Stoermann. “We do however pump the flush water from the back of the holding area, and we pump that up to three miles.”

The next phase is screening. In Fair Oaks case, they use sand as bedding and that’s not ideal for digesters. But cows come first.

“The vets told us sand is the best bedding and that’s what Fair Oaks wanted to use. The cows needs come before the manure system,” says Stoermann. “ We were one of the first [farms] working with Steve Dvorak and his group at DVO and Andrew Wedel with the McLanahan Corporation to get the kinks out of sand removal before it got to the digester.”

Next, the liquid is pumped to a McLanahan hydrocyclone.

The sand that’s recovered is reused for bedding. With this system in place, Fair Oakes purchases only five to eight percent of the bedding sand it uses each year.

Digester to pump
To turn the digester into a CNG producer instead of an energy producer requires a biogas cleaning system. That system was purchased from Anaergia.

“The manure is broken down into biogas,” explains Stoermann. “In our case, it’s about 60 percent methane and about 39 percent CO2 and that last percent of others includes H2S all the other things. The methane goes through a gas upgrading system and removes the CO2 and the H2S to form biomethane, which is 99 percent pure methane from a biological source.

“Once you add an odorant to it — a mercaptan, just like they add to natural gas in the oil fields — then it’s a renewable natural gas. When people use LNG (liquefied natural gas), there’s no odor. You can’t smell it if there’s a leak in the fuel system on the truck.”

Fair Oaks’ DVO digester produces in CNG the equivalent of 2,500 gallons of diesel fuel a day, which is necessary to run the Fair Oaks fleet. And that CNG is then piped about three miles to the nearest fueling station.

A year ago. it was pretty much just Fair Oaks trucks fueling up at the station, but now Stoermann says you see multiple trucks every day.

Fertilizing afterwards
Power and fuel are only a piece of the digestion process. Manure that is left after the process is now ready for application, as it still contains all its nitrogen, phosphorus and potassium.

“The only difference is that after digestion process, it’s stable and it doesn’t generate the free fatty acids that raw manure does that causes all of the smell,” says Stoermann.

Fair Oaks applies the manure to its own land, but because it buys its corn locally, some of the famers also receive digested manure solids to replenish their fields.

Digester
Even if a farm isn’t as big as Fair Oaks, digesters can still be an answer. Stoermann says he sees farms with 500 and 700 cows with digesters and they are an excellent return on investment for electric generation. They are also easier to use without the extra cleaning system.

Harrison Clay, president of Clean Energy’s renewable fuels division, says that usually digesters that he sees used for energy or biomethane vehicle fuel projects are of commercial scale — around 60,000 tons per year.

“Usually what you see happen is that one farm will put a digester in and they’ll collect waste from all the surrounding communities, because one digester is big enough to handle typically more than one farm.”

For those who are interested in pursuing biomethane, but are worried their location may not be ideal, Harrison adds: “If they can get into the pipeline, almost all the pipes connect, and we’re able to move the gas around and get it to our stations. So the key is really not so much to be close to one of our facilities as it is to be close to a natural gas pipeline.”

Truck on the road
Fair Oaks has now had CNG tankers on the road for more than 16 months. The project has reduced emissions from carbon dioxide by more than 20 percent, carbon monoxide by up to 75 percent and particular matter by up to 95 percent. Fair Oaks has shown that manure to CNG not only works, it works well.

Companies talk about sustainability, but rarely do they go to quite the level Fair Oaks has taken it. It’s getting attention too. Hundreds of people have come to the farm to visit the site and the farm, including folks from the EPA, AgStar, DMI and the Innovation Center for US Dairy.

“We support them in their work on digesters and provide them any information we can,” says Stoermann.