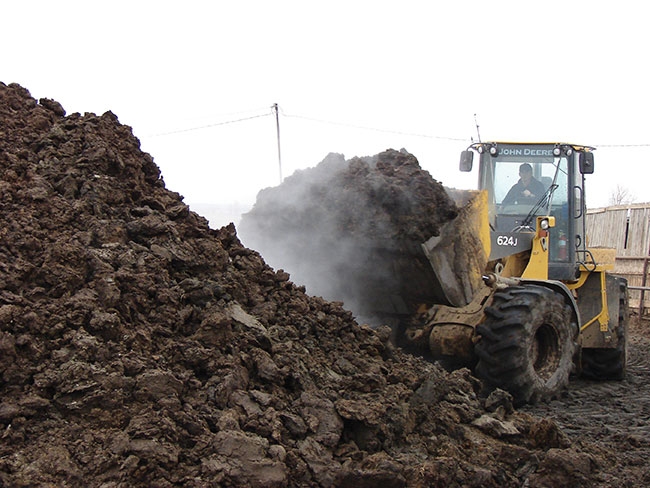 Manure from open-pen feedlots can contain anything from rocks, to cement, to sand and plastic. Himark Biogas has earned patents for two of its technologies to manage these undigestibles before they enter anaerobic digestion tanks and before they begin to accumulate within the tanks. Contributed

It’s been in the works for about a decade, but North American and international patents have been issued to Himark BioGas International for its unique technology, noted for its ability to use high solids feedstock like open-pen feedlot manure to produce biogas through anaerobic digestion.

Developed initially through the Alberta Research Council, it was refined and commercialized by Himark through further research at a working feedlot, biogas and ethanol production facility near Vegreville, Alberta. It later was marketed and demonstrated successful on a much larger commercial scale at a feedlot, biogas, and ethanol facility in Kansas.

“It’s part of our strategy to protect the core intellectual property that makes our system work better than anybody else’s,” says Trevor Nickel, Himark general manager. “We’ve been very careful to try to broadly protect our patents as much as possible.”

He adds that obtaining these patents is a major achievement for Himark because of the protection it affords the company and because it can now be more open with its technology, especially in important markets like the United States.

“The United States is big market place, 10 times the size of Canada,” says Nickel. “So, just on the numbers alone, we couldn’t ignore the U.S. As it has turned out, we have had very good success marketing our technology into the United States. There is a high demand for it, and there are a number of programs that have made anaerobic digestion uptake faster and easier in the States.”

They are currently building three projects in the half to one megawatt, biogas-fueled, electricity production scale for NEO Energy in Massachusetts and Rhode Island. In this case, they are using food waste and agricultural by-products as the raw material, converting it to biogas and organic fertilizer byproducts.

Nickel says Himark can now more openly show potential clients “how our system ticks,” with less concern about revealing too much. It will allow potential clients to independently assess the engineering of the system, which will give them the confidence that the system works as advertised.

Having this ability should result in greater market penetration of the technology and greater uptake of licensing. It will also help clients arrange for financing. Now, clients can approach financial institutions stating their intention to purchase the rights for this patented technology, which gives financial institutions more confidence in what they are being asked to finance.

Nickel says that Himark has a number of projects on the front burner related to applying its technology with cattle feedlot manure being the main feedstock.

“We’re definitely the world leader in dealing with open-pen feedlot manure,” he says. What the company has noticed is not so much interest from feedlot owners themselves because of financial constraints. Where Himark is attracting considerable interest is from renewable energy investors that see the opportunity of using open-pen manure as a large source of the raw material needed to produce biogas for renewable energy production.

When Himark first started refining the technology about 10 years ago, they discovered many biogas production challenges and in some cases, anaerobic digester failures, when solid feedstock material, such as material from open-pen feedlots was being fed into digester tanks. They noticed that many of the prevailing technologies resulted in considerable solid build up in the tanks over time. Given that several of Himark’s company directors also operate a feedlot, they recognized a potential business opportunity if they could develop a system that focused specifically on addressing the issue of solids management before the raw material enters the tank as well as continuous removal of solid build up within the tank.

Removal of solid and indigestible material such as sand, rocks, plastic and metal prior to it entering the digester using the HiSIS system is important for two reasons. First, the materials can interfere with mechanical, chemical and biological processes in the anaerobic digester. Second, solids can build up in the anaerobic digestion tanks.

In addition to the HiSIS deterrent system on the front end, Himark’s Clean Slate technology takes the matter of handling solids a step further. It removes indigestible solids and inorganic foreign objects settled on the tank floor during the production of methane-rich biogas. What Clean Slate provides is continuous production from using open-pen feedlot manure without the expensive and inconvenient need to shut down the anaerobic digestion tanks and clean them out.

Nickel says this dual ability of the Himark system is really what makes the company’s technology unique in the world and why the company put such a priority on obtaining patent protection for its system. He adds that not only is there an opportunity among open-pen feedlot operators for the use of this technology, but also in municipal waste systems where there is a lot of solid material in the raw waste stream.

Patents for the HiSIS and Clean Slate systems also permit the company to more aggressively promote its hybrid anaerobic digester approach, which delivers the best of both a wet and dry anaerobic digester system. Wet systems produce biogas using feedstock with high liquid content, but they have historically had difficulty dealing with feedstock with high solids content. A dry system produces biogas from drier feedstock, but those systems tend to have an overall lower biogas yield than a wet digester. Himark’s hybrid approach proposes to deliver high-energy yield comparable to a wet digester system but with the ability to process drier feedstock through its now patented material management systems.

“Small footprint, high throughput, high output, and low water use – all of those things are possible in a Himark hybrid digester,” says Nickel.

In addition to the United States, Himark has identified several high priority markets for its technology. They look for growing economies where there are poorly developed waste management systems.