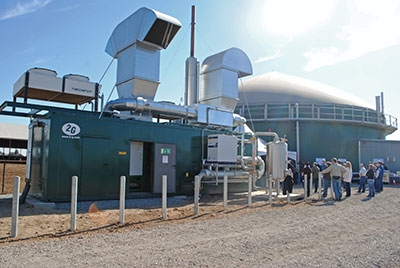 California is the largest dairy state in the United States, with $4 billion generated in annual revenue. There is a concentration of dairy farms in the Central Valley area, with more than one million cows producing about 25 million tons of manure each year.

Digesters, therefore, make good sense, and there are about 15 currently operational. California regulations do allow for the addition of organic material and grease to the manure, as long as permits are in place. The land application of digester sludge fits under existing manure land application regulations.

But getting more manure digesters up and running in the state is currently a challenge, due to a number of
thorny factors.

First and foremost is straightforward economic feasibility, says Dr. Deanne Meyer, an extension specialist in the Department of Animal Science at the University of California, Davis. Making a digester work financially is tied in to the state’s air quality regulations.

“Farmers do not run their generators at full capacity in order to meet statewide NOx emissions standards based on the Clean Air Act,” she says. “Because of this, to achieve adequate electricity production, you need to oversize your generator. That’s expensive.”

A separate issue in some locations is the cost to interconnect to the grid. Meyer says it can be as high as or higher than installing the digester itself.

“If you are far away from a substation or the nearest substation doesn’t have even close to the technology required, it’s just not financially feasible,” she explains. “California has an incredibly outdated electricity transmission system.”

During mid-2013, Meyer surveyed state dairy producers who received funding to a build digester sometime during the last 10 years. Only some of these farmers have digesters that are currently operational.

“We wanted to find out the hurdles facing them, and how to overcome these hurdles,” she says. “The primary messages were that there needs to be more money available to get digesters built, that maintenance and part replacement costs were very high and that electricity production/value has not been as high as anticipated.”

Meyer does not see the model of a farmer owned-and-operated biodigester continuing in California, and believes third-party operation is more feasible going forward.

“If a dairy farm with a digester used more electricity, it would make more sense, because as it stands, the farmers aren’t getting enough for the electricity they produce,” she notes. “And so the more you sell into the grid, the more you basically lose financially.” Meyer adds, “Of course, time-of-use rate differences play into this also,
as does location. In some areas the utility will put money into getting digesters going.”

California Bioenergy is one company having success – in partnership with dairies – to get biodigesters constructed, particularly in the Bakersfield and Sacramento areas. The company has recently negotiated Power Purchase Agreements for the provision of three digester projects with electricity generation to go forward in those two regions. President Neil Black says his firm supports the idea of cleaned biogas from digesters being used for electricity generation, input into the natural gas pipeline system or vehicular fuel production.

“With all three options, you have to obtain financing through grants and loans,” he explains. “Right now only electricity projects can obtain long-term contracts, which are required for debt financing. We are also interested in similar contracts for fuel and/or pipeline injection.”

He notes that the digester costs and the energy generation technology – whether gas clean-up, fuel production or pipeline injection – costs millions of dollars.

Electricity generation or vehicular fuel
At this point, most of the focus of biodigester operation in California is to collect gas, clean it and use it for electricity production, but Meyer says it is anyone’s guess if that will remain the future of biodigester use in the state.

“It’s doable if things shift,” she asserts. “The payment to farmers for their electricity needs to be higher, and there needs to be adequate grant money in place for them to build the digesters. It could be that in the future, however, we will see more digesters with the gas being scrubbed to create compressed natural gas to be used in vehicles. We already have one digester doing this and more are sure to follow.”

Meyer also points out that there is advantage in producing vehicular gas from biodigester gas, in that the process doesn’t require a generator on the farm.

“It wipes all that out – the expense, the feasibility of connecting to the grid,” she observes. “For that reason and a variety of other reasons, I think that the future of digesters use will be in vehicular renewable natural gas.”

However, Meyer notes that a tremendous amount of infrastructure development needs to be put in place for that to occur, as well the development of better technologies for treatment of fuel.

Other factors may also come into play in terms of the future of digester gas use.

“The number of electric cars is increasing, and the demand for electricity may increase a great deal because of that,” Meyer explains. “Dry years with low amounts of snowmelt could affect the capacity of our hydro-electric dams. It’s quite a complex picture.”

She also notes that California has fairly clean energy sources such as hydro electric and natural gas (compared to coal), and that it’s important to the citizens and legislators that this not change.

“We need power with low greenhouse gas emissions and NOx emissions, but how do you get that cost-effectively using digesters?” she asks. “You don’t. We don’t want to create unintended detrimental consequences while creating new sources of energy. It would seem that it’s most cost-effective and better for the environment not to make electricity on farm.”

In the opinion of J.P. Cativiela, generating electricity is the best opportunity for California digester owners in the short-term, but he agrees that “in the longer term, producing renewable natural gas for vehicle fuel may be an even better opportunity.” The senior account executive with consulting firm the Dolphin Group says that either way, the key to building a digester these days is to be able to finance it with a combination of debt and equity.

“Debt requires a lender and lenders like to see that you will receive income that is predictable over the life of the loan,” he notes.

Long-term electricity sales contracts are provided for in California under law SB 1122, and Cativiela explains that although it’s not yet fully implemented, it ensures that utilities will purchase at least 90 megawatts of renewable electricity from agricultural waste, with long-term contracts at decent rates.

“If implemented correctly, this should help many projects get financing,” he says.

Cativiela notes that the same is not yet true for renewable natural gas that could be used to power vehicles.

“Though the state and the federal government have plans in place to offer renewable fuel credits and low-carbon fuel credits, these so far have very unpredictable value and are not guaranteed over the long-term,” he explains, “making it very difficult to secure financing for projects that intend to produce fuels.”

However, Cativiela believes that in the long run, fuels may provide more revenue than electricity, and could become the primary driver for dairy digester development.

Cativiela also notes that a program that provided up to 30 percent of digester construction costs (federal 1603 grants) has now expired.

“We are interested in locating new sources of revenue, possibly from funds collected by the state for greenhouse gas emissions allowances from large polluters, to replace these lost revenue sources,” he says.

“We are working hard to get state-wide grants, and we are cautiously optimistic,” echoes Cal Bioenergy’s Neil Black. “Things move slowly, but there is currently more interest than there has been in years.”