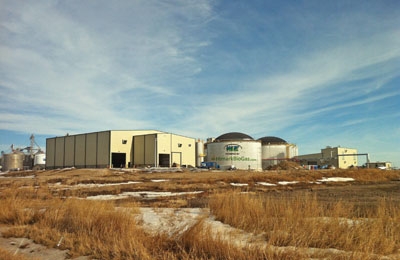 The anaerobic digesters constructed at Western Plains Energy in Kansas are the largest in the Western Hemisphere and produce the largest volume of biogas of any facility in North America. Contributed photo

It’s been a dream that Alberta’s Chrapko and Kotelko families have been pursuing as owners of Himark BioGas for more than a decade – development of a closed-loop cattle, biogas and ethanol production system that they can market globally.

Recently, they made a major breakthrough into the American market.

Based in Oakley, Kansas, Western Plains Energy has started producing biogas captured from anaerobic digestion of cattle manure for use as fuel in its ethanol production process. The ethanol producer has invested in Himark’s patented Integrated Biomass Utilization System (IMUS), which the company developed over the past decade with assistance from the Alberta Research Council.

The main selling point of IMUS is its ability to produce biogas from both clean and dirty manure. This is manure gathered from a location such as an open-pen feedlot, where over time, a high percentage of solids such as dirt, rocks and sand mixes with the manure in the pens. IMUS overcomes that problem by continuously discharging the solids that build up in the digester tanks as part of the biogas production process. This gives Himark BioGas its own niche in the green energy market. With its location close to a large cattle feedlot, the Western Plains Energy ethanol plant was an attractive target for the company. It also has an American patent for the integration and application of biogas produced from a feedlot with an ethanol plant or biodiesel plant.

The $35- to $40-million Kansas installation consists of four massive anaerobic digesters and a tertiary lagoon with 13.5 million gallons of anaerobic digester capacity, making it the largest anaerobic digester in the Western Hemisphere and North America’s largest biogas production facility. It is capable of producing twice as much biogas as Himark’s own digester, which it has built adjacent to a feedlot owned by the Kotelko family near Vegreville, Alberta.

The ethanol plant produces 50 million gallons of ethanol per year and the biogas replaces natural gas used to heat its boilers. Western Plains Energy chief executive officer Steve McNich says the company expects to save about $5 million per year in energy costs by switching to biogas and if it chooses to use some of the biogas to generate power, it will save an additional $3.3 million per year.

The ethanol plant requires 100 million BTUs of fuel per hour in its manufacturing process.

“With all the trouble that digesters have had States-side alongside open-pen feedlots or with any kind of manure contaminated with sand, rock, grit and dirt, we elected to stay focused on a potential site that would be able to use that dirty manure, and be integrated with an ethanol plant,” says Chrapko.

With its continuous digester cleanout feature, Chrapko says that makes IMUS technology highly versatile as compared to other digester suppliers, which have either failed or operated inefficiently due to buildup of solid byproducts in the digester when dealing with manure that has a high solid contaminant content.

“We can handle the very clean stuff like the chicken, hog or dairy manure coming out of the barn,” says Chrapko, “but we can also handle the very contaminated feedstocks, whether it is out of a dry lot or sand bedded dairy, or open-pen feedlot.”

Based on their own experiences, the owners of Himark BioGas knew that there were many “nice synergies” when a feedlot, digester and ethanol plant were integrated. In fact, Himark BioGas has also constructed an ethanol plant attached to its installation near Vegreville. It is about one-fifth the size of the Western Plains Energy ethanol plant.

While conducting its investigation into potential U.S. customers, the company discovered that Western Plains Energy was searching for someone to supply a biogas system based on anaerobic digestion of feedlot manure, which consisted of a high percentage of sand. However, they were having trouble finding a supplier with experience disposing of the buildup of sand in the digester on a continuous basis, and shutting down the digesters to clean out the sand at regular intervals wasn’t an option.

“When we reached out, timing was everything and they were tuned in to the value we offered,” says Chrapko, “given we had our own operation in Vegreville up and running since 2005. They were able to come and kick the tires and that helped tremendously because they knew they weren’t going to be the guinea pig.”

Construction of the Western Plains Energy installation began last summer and the system began ramping up to produce biogas in January.

The IMUS infrastructure consists of four large digesters and a manure infeed building. The manure is transported with end dump trucks from a 50,000-standing-head, open-pen feedlot located eight kilometers away. Some of the heat generated by the adjacent ethanol plant is channelled into the digesters to maintain, control and enhance the digestive process, while the biogas produced from the digesters is transported to the burner on the ethanol plant boiler.

Himark BioGas engineered its biogas plant based on the energy needs of the ethanol plant and comparing that to potential feedstock suppliers in the region. Pioneer Feedyards owner Scott Foote is a longtime investor in the ethanol plant and the plant has been selling him wet distiller’s grain to feed to his cattle for years. Pioneer Feedyards is the main supplier of manure feedstock to the ethanol plant, and while it is not being paid for the manure, it is benefiting from its nutrient value by land applying the solid byproduct exiting the digesters.

It still has chemical and nutrient value as an organic fertilizer. That’s because the solid byproduct resulting from the anaerobic process uses only the carbon, but the nitrogen, phosphorus, potassium and micronutrient components remain intact. So this processed manure, which is also 100 percent seed and pathogen free without the odor by the time it exits the digester, will continue to be land applied as an organic fertilizer on the feedlot owner’s land. While it is a more consistent organic fertilizer, there is less volume – estimated at about one quarter of the amount of material exiting the digester as went in.

“The feedlot owner was sitting in during early discussions around the digester; he was part of the decision making all along and the due diligence that the ethanol plant conducted on Himark BioGas,” says Chrapko.

Operation of the feedlot in Kansas was very similar to how open-pen feedlots are managed in Alberta, with the pens typically scrapped once or twice a year and the manure land applied.

“As we get going, we will be in those pens more often harvesting manure, but it’s much like you’d see in Alberta,” says Chrapko.

He adds that because the biogas plant will receive all the material that is typically collected from open-pen cleanouts, the system must process the feedstock to catch major contaminants such as, for example, chunks of concrete that equipment can sometimes chip off during the pen clean-out process.

In terms of impact on a feedlot’s day-to-day manure handling operations, the emphasis has been on minimal disruption of what the feedlot is currently doing.

“To make it work every day for the next 40 years, we have said that we won’t change anything in the feedlot,” says Chrapko. “We can just slipstream in and instead of those end dump trucks leaving the feedlot and heading to the cropland, that truck will just head to the biogas plant.”

Because the manure will be removed more often, he says, the feedlot could actually realize health benefits to its herd.

The manure is used soon after it is removed from the pens because this is beneficial to biogas production, which depends heavily on biological activity. Himark BioGas wants the biological activity that typically occurs in manure to occur in the digester tank and not while the manure is in a storage pile, so there would be no more than about a five-day supply stockpiled at the biogas plant at one time.

The feedstock going into the digesters will not be entirely feedlot manure but will also consist of other biological materials such as stillage, ground-up hog mortalities and food wastes. A specific recipe will be used to achieve the biogas production that the ethanol plant requires. Himark BioGas brought in one of its portable laboratories, which essentially operates as a mini-digester to conduct extensive field studies of the feedstock materials and the biogas response resulting from various recipes. The data collected helped Western Plains Energy make its case when applying for grants and financing. The project has received a $5-million grant from the United States Department of Agriculture, and a $15.6-million grant from the Kansas Department of Commerce.

Acquiring sources of food waste to add to the digester recipe is to Himark’s advantage because, Chrapko says, there is an opportunity to make money from tipping fees, and food waste tends to have about twice the energy content of manure.

So in locations where food waste feedstock sources are plentiful, it can actually influence the size of the digester.

However, he says, with the Western Plains Energy installation, manure is definitely the “anchor tenant” in terms of feedstock, representing well over 50 percent of the raw material entering the digesters.

Himark BioGas believes that with the power of its patents and its focus on processing contaminated feedstocks, it has a definite head start in the global green energy market.

“That focus opens up literally billions of tonnes of material that has not been able to be digested before,” says Chrapko.

“We feel that we have a very bright future and many more projects because we can handle that material that the traditional companies have shied away from or done a mediocre job of handling.”