Manitoba dairy Happy Rock Holsteins is the first operation in North America to use equipment from application system manufacturer SlurryQuip, which is based in Northern Ireland. 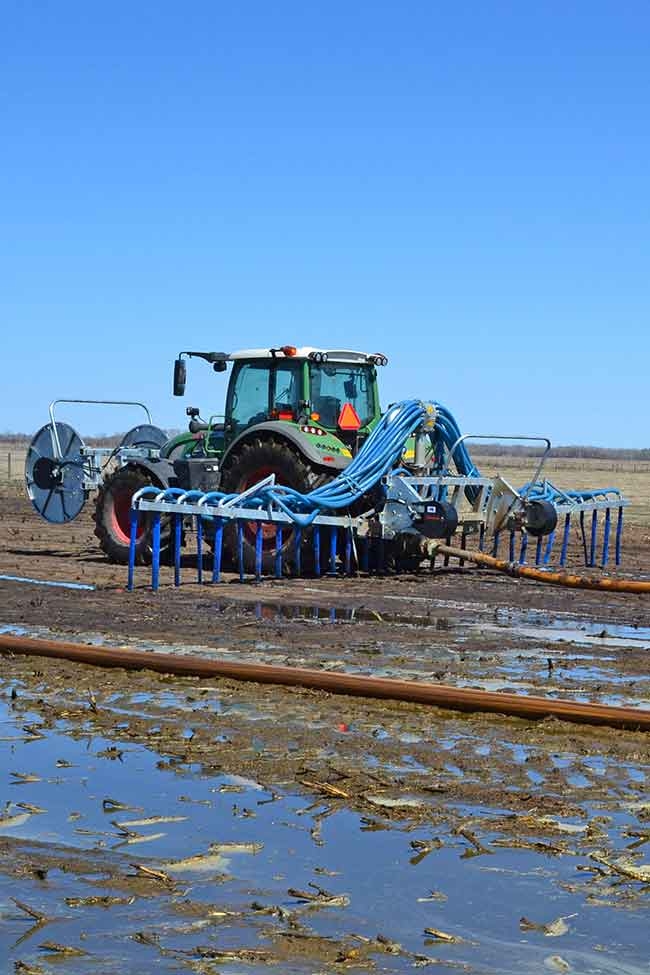 The SlurryQuip dribble bar and drag hose liquid manure application system is a product of Northern Ireland, and is already in widespread use in the UK, Australia, and New Zealand. Contributed photo

It is the quintessential dilemma faced by farms that generate significant amounts of liquid manure – should the farmland apply the manure themselves or should they hire a custom manure applicator?

Both have their pros and cons, and it often comes down to how much the farm owner trusts his custom manure applicator with the service they provide. Some issues are really not in the custom manure applicator’s hands, like the weather and exactly when the application is done, because during prime time in spring and fall, the phone never stops ringing. Farmers often must wait their turn for the best custom applicators, which may not always work well with the farm’s cropping timetable. Advantage – farm-based system.

On the other hand, there is the time issue. Some farmers believe it simply makes more sense to hire a custom manure applicator because they and their employees need to stay focused on their dairy or hog operation. And then there is the cost of investing in tankers or a drag hose system, plus the learning curve required to use them properly. Advantage – custom manure applicator.

Dairy farm hand and engineer Mark Tucker believes there is a market niche and a demand for a simple-to-use and affordable drag hose system suited for farmers, and he believes the SlurryQuip system fits the bill.

“In my mind, it fills a gap in the market,” says Tucker. “Most of the North American systems are built overly big for your average farmer. This system is built for the farmer to use.”

The Northern Ireland-based manure application equipment manufacturer is setting up shop in North America. Its systems are currently widely used in the United Kingdom, Australia and New Zealand. The first North American system was sold last fall to Happy Rock Holsteins in Gladstone, Man., where Tucker is employed as an engineer and farm hand.

The dairy is owned by Steven Smith and has about 750 head, with 350 to 400 milking cows housed in a new free stall barn built two years ago. It has a slatted floor with liquid manure storage beneath it. The manure is pumped out twice a year and land applied. The dry cows and replacement stock are housed in an older barn with straw bedding that is cleaned out every couple of months, stockpiled, and then land applied using two, Kuhn manure spreaders. The dairy also manages about 3000 acres of cash and feed crops, in the vicinity of the dairy. This is where both the liquid and solid manure is land applied in spring and fall. Manure can only be spread in Manitoba between April 10 and November 10.

For two years after the new barn was built, Happy Rock Holsteins hired a custom manure applicator to pump out and land apply their liquid manure but it didn’t turn out as well as they had hoped. In fact, Tucker says land application of the liquid manure by the custom manure applicator destroyed an alfalfa crop twice, which encouraged the dairy owner to want to investigate a drag hose system that the farm could operate themselves. Farm hand Tucker was given the task to investigate drag hose systems and to make recommendations. That’s when he encountered the SlurryQuip system. Given his engineering background, he was quite capable of dissecting the pros and cons of each system and, although SlurryQuip had no systems working in North America, Tucker came to the conclusion that it was the right system for Happy Rock Holsteins to purchase and operate on their own.

While it requires dedicated farm employees to operate the SlurryQuip system, Tucker says that it has its advantages. First, farmers can apply the manure on their own timetable and second, they have the opportunity to more carefully manage nutrients being applied on each parcel. He says, for example, that there are plans at Happy Rock Holsteins to make several applications each year on some parcels after each alfalfa cut. Organizing this type of timely and frequent service hiring a custom manure applicator would be a costly endeavor.

What he also likes about the SlurryQuip system is that the farmer can practice more precise farming, based upon the global position system (GPS) in the tractor, and the ability with the SlurryQuip system to carefully control the flow. With these two features, the farmer can place the liquid nutrients exactly where and in the volume that it is needed based on soil sampling. This is generally contrary to what Tucker sees as the major trend in North American custom manure application, which seems very focused on applying a fixed volume per minute across an entire field versus making application adjustments on-the-fly depending on where it is needed.

“What attracted me to this system is its accuracy,” says Tucker. “Applying volume per minute is fine for the applicator who is being paid by the gallon. For a farmer, who wants to put on the manure accurately, in my view, this system is ahead quite a bit in that respect.”

Another feature that Tucker likes about the system is the ability to reduce flow from the dribble bar by up to 75 percent, meaning that the tractor operator can significantly reduce flow particularly when making turns and also in the event of the need to reduce flow in a hurry because of a flow issue. He says that is likely what caused the problem in the damaged alfalfa field owned by Happy Rock Holsteins – a problem with over application by this particular custom manure applicator, as the operator made slower turns without reducing the flow rate.

Happy Rock Holsteins essentially purchased the SlurryQuip system based on Tucker’s research over the Internet. The complete system arrived on the farm in a container, almost completely assembled. It was his job to complete the assembly, attach it to the tractor, and put it to work. Given his background in agricultural engineering, he says it was less scary for the dairy to make the equipment purchase in this way. There were no issues attaching the system to the farm tractor’s PTO and three-point hitch.

“When we looked at the system, certainly in my eyes, it was fairly simple to see how it worked, the fact that it could work, and that there were no design flaws,” says Tucker. “Both Steven and I saw many design advantages. We saw that it was much simpler to use from the farmer’s point of view than what we saw in North American systems.”

He and the dairy owner also liked that all the components are galvanized.

“In 10 years time, assuming we don’t bend or break anything, the machine will still look like new,” says Tucker.

He says the design of both the SlurryQuip hose reels and lift systems, and how they are designed to work with just one tractor in the field, powered off the tractor’s PTO and with the reeler mounted on the dribble bar, this makes it possible for one person to manage the whole field operation, which they accomplished at Happy Rock Holsteins. They only had one other person involved, looking after the pump at the farm site.

The SlurryQuip system was put to work throughout last fall’s application season with no issues. Shortly after the manure was land applied, it was disked into the soil.

“We made some errors ourselves, given the learning curve,” says Tucker. “But as far as the machine, we didn’t have one problem. The system worked straight out of the crate.”

Their SlurryQuip system consisted of two Bauer pumps, a Vogelsang macerator, a Krohne flow meter for inside the tractor cab, 2.4 kilometers of a combination of 5-inch and 6-inch Oroflex umbilical hoses, four SlurryQuip reels, two SlurryQuip reel lifters and a 31-foot wide SlurryQuip dribble application bar. The dribble bar was mounted on a 724 Fendt tractor, which Tucker says provided far more power than they needed. He suspects that a 100 horsepower tractor would have been adequate for their system because it is a dribble bar versus an injection system. They used the PTO from another farm tractor to power the pump to suck the liquid manure from the tank through the umbilical hoses to the applicator in the field. The system allowed the dairy to reach about 70 percent of its farmland, using only one pump.

Many of the system’s components, like the pumps and hoses, are common, off-the-shelf brand items available worldwide, although Tucker says there are few wear parts on the equipment.