The key component to Pennsylvania’s Jones Custom Manure Hauling is the company’s tractors. They not only pull the manure tanks through the field but also transport the tanks from job to job. They are the true work horses of the business. 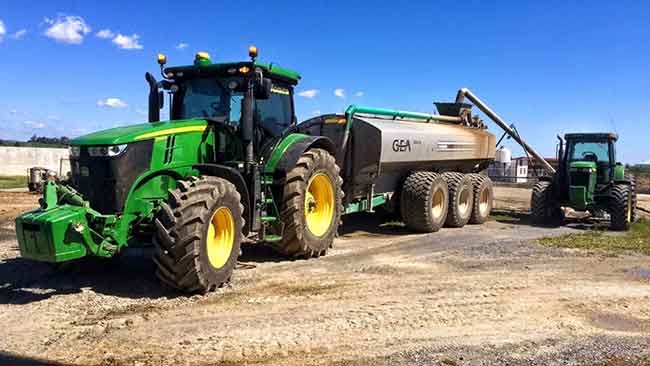 Jones Custom Manure Hauling will travel as far as three and a half hours from home to work, conducting most of the operation’s business in Pennsylvania and neighboring Maryland. Contributed photo

Jesse Jones, owner of Jones Custom Manure Hauling in Pennsylvania, has done an exceptional job of “keeping the wheels turning” on his custom manure application and hay-making business.

The key to his success has been to diversify his business and his list of clients, keeping an open mind to any opportunities that might come his way. Conducting most of his business in Pennsylvania and neighboring Maryland, Jones will travel as far as three and a half hours from home to work.

“If it pays, we’re willing to go,” Jones says. “We try to utilize our equipment all year long,” and if last year is any indication, they have met that goal, as they were busy throughout the entire year.

The lynchpin of his business – located in Carlisle, about 35 miles from Harrisburg – are his tractors, which not only pull his manure tanks through the fields but also transport the tanks from job to job, and work in snow removal at various warehouses and parking lots, using the snow pusher attachments placed on them. In addition to custom manure application, Jones has also diversified into custom hay merging and mowing to help local dairy farmers produce silage. The tractors are also used to pull the company’s mowing and merging equipment.

Jones’s primary business is providing custom manure hauling and application services for the large Pennsylvania dairy industry, in an area he describes as very similar in appearance to the Irish landscape. Unlike the western United States, he says it’s rare to find a 200-acre single patch of farmland in that part of the country. Like rural Ireland, the area consists of numerous small patches typically less than 100 acres each, with a lot of houses, plenty of hills, and narrow roads. As the area is situated between two mountains, Jones says that he is fortunate in that different areas tend to dry out at different times in spring. So he is not pressed from all quarters to make himself available to land apply manure all at the same time. He has the luxury of being able to move his equipment from one area to another at precisely the time it is needed.

Jones Custom Manure Hauling land applies more than 120 million gallons of manure annually, with most of the manure surface applied on the soil. His dairy clients milk anywhere from 40 to 600 cows. The manure from each dairy farm is land applied on their own farmland. Jones has transported manure from the lagoon for land application up to 10 miles.

However, he has also found a way to diversify beyond the local dairy industry, which is prone to fluctuations in milk prices. About 20 percent of his business is using his manure application equipment to inject organic material shipped in from various food processing facilities. Jones has a contract to receive the material, which is then either stored in liquid manure lagoons among his dairy clients who have agreed to accept the food waste for land application later, or sometimes it is land applied as it arrives. He says this organic material is in high demand among local farmers because of the positive impact it has as fertilizer in crop production.

“We’ve seen crazy results,” Jones says. “We’re talking about some miracle grow here. There is about 70 pounds of nitrogen to a tanker load of it.”

Jones owns the business with his father, Jason. It was incorporated in 2004. Jones grew up on the family dairy farm, following in his father’s and grandfathers’ footsteps. However, he says that working with livestock didn’t appeal to him. He describes himself as someone who prefers to work in the field running equipment, which was his biggest motivation for taking up a career in custom manure application. He started by working for someone else, and when that business owner wanted to sell out, he jumped at the opportunity to strike out on his own and hasn’t looked back since.

His father continues to actively farm, managing a dairy with 100 milk cows and planting crops on 800 acres. Some of the food processing waste that Jones is contracted to land apply is applied on this acreage as organic fertilizer.

Over the years, the business has grown steadily both in the size of its manure applicator fleet and in the geographic area that the company services. Jones says the business has had its ups and downs, particularly during a three-year stretch starting in 2009 when there was a glut in milk production and dairy farms were finding it hard to keep the lights on. The company faces a similar situation now. While their input costs have gone down because of the price of fuel, milk prices have also taken a nosedive. Also, Jones is in an area with a large Mennonite population, and when they decide to do business with someone else, they tend to do so as a large group. Despite the challenges over the years, Jones’s strategy of business expansion and diversification has paid off, as demonstrated by his recent purchase of five new John Deere 7290 auto track and auto steer-equipped tractors to replace four John Deere 7280 tractors purchased in 2012.

The company had been using Series 8 John Deere tractors previously but was feeling squeezed on the cost when they investigated a new fleet of tractors.

“We discovered that the Series 7 John Deere would do just as well as a Series 8 would, so in our eyes, it is a big little tractor and it does what we need it to do, which is why we took that route,” Jones says.

In addition to these new John Deere tractors, Jones also has a Fendt 930 tractor and six 6,300-gallon Houle manure tanks. The company evolved into more manure injection once it took on the food processing disposal contract, outfitting two of its tanks with Houle toolbars equipped with Dietrich 70 series injectors. The remaining four tanks surface-apply the liquid manure. They also have two Houle lagoon agitation pumps and one Dryhill agitation pump.

They added hay mowing and merging to their complement of services in 2012, and this is accomplished using Pottinger triple hay mowers, an H & S hay merger and an Oxbo hay merger.

Jones says he is open to the idea of investing in a drag hose system, but given the number of hills in the area, the smaller parcels of land and the number of housing developments being constructed, it would have to be the right circumstances with a customer before he could justify making that move. Right now, he says his tanker system is a good match for his customer base.

Jones has worked hard and, he says, “too many 24 hour days” during the past 12 years to develop a modern fleet and a professional service, taking any required training to ensure that he and his four employees are qualified according to the standards of various states where he conducts his business.

Over the past decade, he says there have been many legislative changes intended to ensure that farms have a nutrient management plan and that custom manure applicators land apply according to a plan typically developed by an agronomist. He adds there is greater concern about nutrient drainage into watersheds and he has adapted his application practices accordingly to ensure he is leaving an adequate buffer, depending on whether or not the farmer has sown grass in drainage areas to minimize the potential for manure seepage. Winter application rates have also changed, limiting their application rate to 5,000 gallons per acre, but Jones adds that applying in winter takes common sense. If there is a foot of snow on the ground, there shouldn’t be any manure spreading.

“We are manure certified,” says Jones, which required a daylong course offered by the Pennsylvania Department of Agriculture, followed by a test.

“If you didn’t pass that test, you shouldn’t be hauling manure,” he adds. “New laws have come into effect, there are certain setbacks that we have to deal with now, and we also have record keeping of where we put each individual gallon into each individual field.” While he now spends about double the time for record keeping and billing, he believes that new laws tracking where manure is applied have elevated the general level of professionalism among those willing to adapt to new standards.

To this point, they have not installed flow meters in their tractors, but calculate the application rate based on their speed and the acreage that they are covering.

“We know how we are putting it down with simple math,” Jones says. He adds that so much of operating a successful custom manure application business is just using common sense on where and when to apply.

He says over the past decade, the area in which he works has witnessed a lot more urbanization, with many individuals moving in but working in places like Washington. This has added another element to how he conducts his business on a day-to-day basis.

“The farms have always been there, so they [neighbors] know that the manure is going to get spread at some point,” Jones says. “We’ve had minimal complaints. We’ve done this for a long time, they see our rigs, they know what time of year that this is going to happen, so it’s expected. If they move to the country, they have to expect that.”