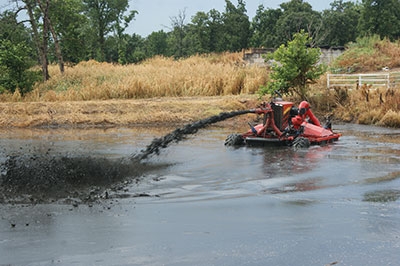 Nuhn Industries’ Lagoon Crawler is known by many names – the Batmobile, the F1 racecar, Hot Wheels. But to the custom manure applicators who are actually getting this bright red agitation boat manure-splattered, it has one important label – efficient.

“It will do the job of four lagoon agitators in less time,” says George Lorenz of L&M Industries, based in Black Creek, Wisc. “With an agitator, you’re really only reaching the manure in a 50-foot diameter around it. You only wish it was doing as good a job as this crawler.”

L&M Industries handles about 350-million gallons of dairy manure annually, mostly in Wisconsin. Of that volume, about 40 percent is sand-laden. And if there’s one thing the Lagoon Crawler appears to excel at, it’s mixing liquid manure and sand into suspension.

“Sometimes, it does too good of a job,” admits Lorenz with a laugh. “We can mix for an hour and then we have to shut the machine down. The manure is so well-mixed, it can become too thick to pump.”

Lorenz had his first glimpse of Nuhn’s creation in August 2013 during that year’s North American Manure Expo, held in Guelph, Ont. He had a second look at the machine during a farm show later that same year in Oshkosh, Wisc. When he discovered another custom manure applicator in Wisconsin had purchased one, he managed to wrestle a test drive.

The brainchild of Ian Nuhn, a prototype of the amphibious lagoon agitator was designed and constructed by Nuhn Industries in 10 days so it could be displayed at the 2013 expo. The company worked from August 2013 to January 2014 perfecting the prototype before shipping the first unit in February 2014.

“The idea came from our customers,” explained Nuhn. “We talked to our customers and dealers about what they needed, what they were looking for. They said it needed to have wheels to get in and out of the pit.”

Besides hydraulic wheels, the Lagoon Crawler also features a 275 horsepower Cummins/John Deere motor, which can pump close to 10,000 gallons of manure per minute. It has a hydraulic lift undercarriage to help it maneuver in and out of lagoons and is remotely operated.

There are currently 35 Lagoon Crawlers in use, mostly in Wisconsin and California. There are another 25 on order, including some heading to Russia, a country Nuhn described as “an untapped market.”

Earlier this year, L&M Industries took delivery of its first lagoon crawler, which currently has 110 hours on its 275 horsepower engine. A second one is on order.

“It’s great,” says Lorenz. “I like the fact that, so far, it hasn’t plugged up. If you get it stuck on a sand bar, you’re able to drive it right off. You can drive it out of the pit and around the yard. One person can load it.”

That ease of handling was one of the features that struck a chord with custom manure applicator Jim Jolivette of Jolivette Hauling out of Taylor, Wisc.

“The labor efficiency really struck me as something positive,” he said. “It really helps when you’re short on labor. It’s easy to manage and easy to run with one person.

“And there’s the safety aspect, too. It’s handy to drive in and out. You don’t have to crane it in.”

Jolivette Hauling handles between 90- and 100-million gallons of manure annually, almost all of it dairy with about 40 percent sand-laden.

“It does a very good job agitating,” said Jolivette. “There’s getting to be more sand used as bedding in the area. It suspends the sand a lot better.”

Jake Zutz of Braun Electric Inc. in St. Nazianz, Wisc., has experienced first-hand the time-saving aspects of the crawler.

“We have a client who we usually end up leaving with about six-feet of sand remaining using pumps and props,” he said. “With this boat, he was left with six-inches [of sand] remaining in the entire concrete-lined lagoon.

“It does an excellent job agitating and can do a way better job than a lagoon pump. You don’t need three tractors and three pumps. The boat makes you way more mobile.”

Braun Electric, which handles 150- to 175-million gallons of manure annually – about 50 to 70 percent of which is sand laden – currently has two crawlers available for rent and custom work.

“We have a couple hundred hours on ours,” said Zutz. “I’ve tried to get it stuck and I haven’t been able to. It’s just a great idea on wheels.”

Custom manure applicators, farmers and other people involved in the manure handling industry had an opportunity to see Nuhn’s Lagoon Crawler in action during the 2014 North American Manure Expo, held in Springfield, Missouri. It was one of many lagoon boats showcased during a demonstration at Chapman Dairy, a pasture-based dairy located near Pierce City.