Some manufacturers and farms are struggling to replace workers. How is the effect trickling down? 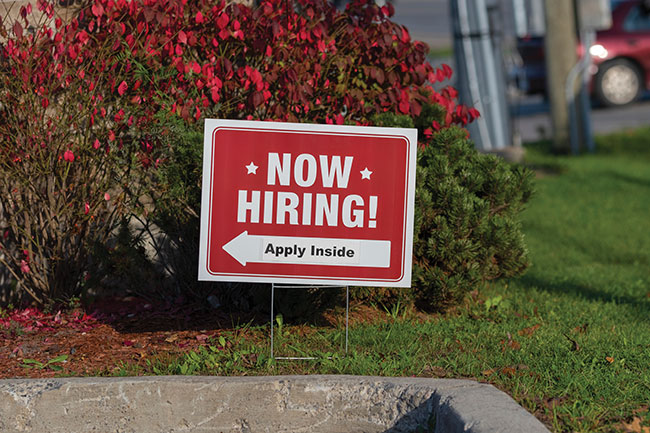 It’s no secret that many farms and companies that do business in the ag sector have been struggling to deal with a shortage of skilled labor for some time now.

Those struggles have become even more pronounced during the pandemic as the competition for workers has intensified, with employers promising prospective employees everything from increased salaries, work-from-home arrangements and even bonuses just for applying.

Some have dubbed it the ‘Great Resignation’ as workers migrate elsewhere in search of greener pastures. In the U.S., it’s estimated that more than 47 million Americans voluntarily quit their jobs as part of this mass migration in 2021. While it hasn’t occurred to the same extent in Canada, some experts north of the border are warning that the underlying factors that led to it happening in the U.S. are also at play north of the 49th parallel.

This phenomenon has impacted virtually every component of the North American economy, but there are unique pains within the agricultural sector. And it doesn’t appear as if the situation is going to get much better any time soon. A recent report from the U.S. Bureau of Labor Statistics that indicated employment of agricultural workers is expected to increase by just one percent from 2019 to 2029.

Manufacturing
When provincial agriculture and agri-food ministers from across Canada met with their federal counterparts in Guelph, ON last November one of the primary topics of conversation was the need for support to address challenges in the agricultural manufacturing workforce.

Donna Boyd is president of the Agricultural Manufacturers of Canada (AMC), an industry-led coalition that represents about 250 member companies across the country. Boyd says AMC members are facing an unprecedented labor shortage in their industry.

“We, like so many other industries, have been hit with the issue of not having enough skilled trades in manufacturing,” she says. “I can say without question that many of our members have got a hundred jobs that are open on the board that need to be filled right now. It’s really unprecedented. I wouldn’t say it’s a crisis situation, but it certainly could become a crisis situation if we’re unable to attract more talent.”

Boyd says the labor shortage in the ag manufacturing sector is the result of several factors. One of the primary causes has been the rising demand for Canadian-made agricultural equipment, both domestically and internationally. Ultimately, there is a price to pay for having a good reputation: some manufacturers are having difficulty hiring enough people to keep up with that demand.

“Canadian-made ag equipment is renowned for being the best in the world and that is reflected in the demand for it right now. Plus, commodity prices are high right now, and farmers feel it’s time to be reinvesting in their equipment. Demand is high for the equipment and we need the people to make it,” she adds.

Another challenge ag equipment manufacturers face is the competition for skilled workers from other industries, Boyd explains. For example, the skyrocketing demand for housing in provinces like Ontario has prompted an increasing number of workers to consider what opportunities might be available in that industry.

“We’ve seen demand from other sectors and other industries kind of pulling talent away or at least turning their heads in that direction,” she says.

Compounding the problem is the fact that many ag equipment manufacturers are based in rural locations, some of which simply don’t have the basic infrastructure such as schools, homes and hospitals, needed to lure workers away from more urban settings. More than 40 percent of AMC members are based in rural communities with populations of 10,000 people or fewer.

Boyd says her organization has been working closely with municipal and provincial governments to develop solutions to problem which will not only benefit AMC members, but also the communities in which they are based.

“It couldn’t be more imperative that we get people out there and that we afford them all the quality of life that they are looking for,” she says.

Although the pandemic hasn’t necessarily been the primary cause of the human capital crunch ag equipment manufacturers are dealing with, it has certainly exacerbated the situation, according to Boyd.

Supply chain disruptions during the pandemic and the resulting price increases for materials, and have left those companies with no choice but to pass on those additional costs to customers.

“We’ve seen container prices go up over 400 percent, from [CAD] $4,000 maybe 18 months ago to over $20,000 now. That has negatively impacted pricing and those price increases have to be passed on one way or another,” says Boyd.

Boyd doesn’t see the current labor shortage in the ag manufacturing sector changing any time soon, especially with the current level of demand for products expected to continue well into 2023.

One of the things she would like to see happen is industry, academia and governments to work together to address both the current and future workforce needs of the AMC and its member companies.

Dairy
Farming is an $81 billion per year industry in Pennsylvania, and dairy is a big part of that with more than 5,000 dairies scattered throughout the state.

While it too is struggling with a severe labor shortage, the problem dates back to well before the start of the pandemic.

In fact, the deputy director of the Professional Dairy Managers of Pennsylvania (PDMP) says the local dairy industry has been dealing with a labor shortage for nearly four decades now. Caroline Novak says it’s particularly a problem for larger-scale dairy farms that can’t rely solely on family members for their labor needs.

“We’re at a critical point in terms of the lack of skilled workers,” says Novak. “Americans don’t want these jobs. Unless you’re a farmer and you grew up on a farm, it’s too much work, it’s dirty, it’s smelly… [and] it’s outdoors in bad weather. Milking cows is just not going to draw people from outside the industry.”

Such demanding work makes it tough for dairy to compete with other industries like pharma and genetics to attract younger skilled workers, she says. Further complicating the situation is the fact that most dairy operations are not located in markets where the majority of the labor force is located.

One of the complications the pandemic has created for Pennsylvania’s dairy industry is it’s made hauling milk from the farm to processors more challenging. A shortage of drivers has forced some dairy operators and private haulers to join forces to find ways of filling the void. The good news, Novak says, is that it has yet to cause any breakdowns in the supply chain like at the height of COVID when plants had to shut down and producers had to dump their milk.

The labor shortage is forcing some dairy producers to find creative solutions to the problem. A growing number are turning to advanced technology such as robotic milking machines. While that kind of tech has been a boon, Novak says it’s not really addressed the labor shortage, but simply changed the type of worker dairies require.

Novak says the biggest impediment the dairy industry faces when it comes to addressing its labor needs is the fact that it  doesn’t have access to the same talent pool that other farms do. Because dairy farms in the U.S. are considered year-round operations, they are not permitted to bring in temporary foreign workers.

“What would really help is if we had access to foreign workers,” says Novak. “We have continued to try to work with Congress to try and get something passed that would give animal agriculture, and especially year-round agriculture, access to that workforce and it dies every time. It’s been very frustrating.”

Applicators and handlers
Steve Gloor is a past president of the Ontario Professional Agri-Contractors Association (OPACA), which represents about 60 farming contractors across the province, and has been involved in the manure application business for more than 20 years.

While manure applicators have been dealing with a labor shortage for some time, Gloor says the situation has become even more problematic since the start of the pandemic.

“It was amplified when COVID hit because some of the seasonal, older employees [who] you had to run tractors or drive trucks…a lot of them said, ‘With everything going on I’m just going to stay home. The family says I should stay safe.’ Replacing them has been a real challenge the last two years.”

Adding to the problem is the fact that workers who remain now face additional pressure to help fill that labor void, says Gloor.

“Some walk away. People just get tired of the long, long hours. They’re not interested in spending every waking moment at work,” he adds.

Although the number of manure application businesses in the province has remained relatively static, Gloor acknowledges that the labor shortage has seen a growing number of business owners say enough is enough.

“In our membership, we’ve had members who have gotten completely out of the manure application business,” he says. “The reason they got out was they had the equipment, they just couldn’t keep employees around and that’s what was holding them back. There’s enough work out there…they just couldn’t keep enough help around to get the work done.”

Gloor doesn’t think there’s a magic fix to the labor shortage facing his industry. Still, one thing he’d like to see is more effort made to educate people from non-farm backgrounds about the career opportunities available in the agricultural sector.

“I think agriculture is one of the careers that gets overlooked a lot because people who work in agriculture generally come from agriculture: you were raised on a farm and stayed on the farm. Promoting agriculture and the fact there are a lot of jobs out here is key.” •