Nitrogen management is risk management – how can you capitalize and find the best application solution? 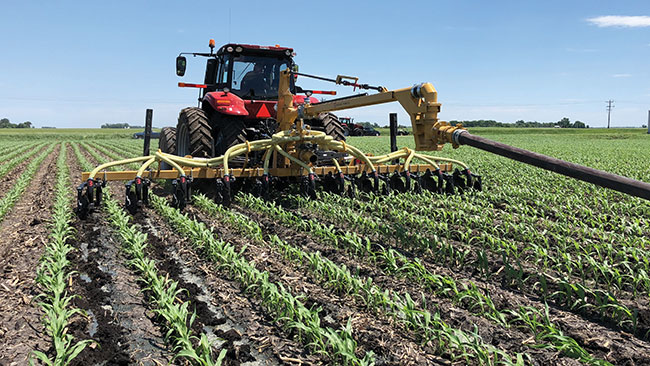 What’s the best time to apply nitrogen in corn to boost yields while minimizing nutrient losses? In Minnesota, a succession of very wet autumns, even in the western part of the state where it’s historically been dry, have signalled a change in best management practices. With wetter conditions comes greater potential for N losses, and experts are re-evaluating the guidelines.

“In Minnesota the guidelines for N indicate that fall application of urea is an acceptable practice in the western part of the state – but we’ve seen over the last seven or eight years that conditions have gotten wetter,” says Fabián Fernández, a nutrient management specialist in the department of soil, water and climate at the University of Minnesota.

Fernández has spent the past five years conducting N application timing trials across the state, comparing fall versus spring applications of urea, anhydrous ammonia and ESN. In these trials, Fernández’ team found fall-applying any of these N sources resulted in greater losses compared to spring application – especially urea, even if urea is subsurface banded or applied with a nitrification inhibitor. “We’re working to revise some of these guidelines, because what we’ve seen from the research as well as from anecdotal evidence shows that it is a problem to apply urea in the fall,” he says.

“These studies are timely because anhydrous ammonia used to be the number one source of N in the state, but it’s disappearing from the marketplace in Minnesota, so some folks, especially in the southern part of the state, say, ‘We’ll continue our fall applications and just change from anhydrous to urea.’ But this is a big problem because you have more potential for N loss with urea than anhydrous” he says.

Averaged across continuous corn and corn-soy in Lamberton, Morris and Crookston, the researchers found that it took 29 additional pounds of N per acre for fall versus spring application to produce nine bushels less yield, meaning it was doubly costly to producers to apply N in the fall.

The math is clear, says Fernández, and that’s why most producers are moving away from fall or early spring applications and focusing more on preplant and sidedress applications.

It’s always difficult for farmers to know which approach will work best on their operations, and farmers have to balance both nutrient requirements, nitrogen loss, and logistical considerations such as timing and storage.

Melissa Wilson is an assistant professor and extension specialist in manure nutrient management and water quality at the University of Minnesota.

A few years ago, Wilson set out to assess producers’ options for applying swine manure as a sidedress treatment using a dragline hose system or a tanker truck. The applicator community was skeptical at first, she says.

“When I started with the program I told people I was going to sidedress manure and they told me it wouldn’t work, and then I came back with the data from the dragline hose system and it was fun to see people scratching their chins and saying, ‘That is interesting.’ We had a couple of really wet years – record breaking years. A lot of people were thinking we need to consider other methods,” she says.

The project seemed helpful from both the nutrient uptake standpoint and the environmental standpoint, says Wilson, as the region has been getting wetter and wetter in the fall. Sidedressing manure could offer producers another opportunity to apply as potential windows of application narrow.

In the first two years of the study, using a dragline hose system, the team found that liquid swine manure could be used as a sidedress N source when corn was at the V4 growth stage.

Wilson tested the dragline method in smaller research farm plots, where she opted to fill a six-inch hose with water, capped at both ends, pulled behind a tractor and dragged over about four rows of corn at a time in both directions along the row to assess the physical impacts on the growing corn.

“From an applicators’ standpoint it works really well as long as the hose isn’t dragging a bunch of mud – so don’t do it in wet conditions,” says Wilson. “But the corn has to be pretty small. Beyond the V3, V4 stage it got a little iffy – but as long as the whole plant didn’t get ripped up it would grow back, because the growing point is below the soil before the V5 stage,” she adds.

In the third year, when a tanker was used, yields were lower, perhaps due to compaction. The fourth year of data will be important to judge yields.

On-farm trials
The adoption of best management practices for N loss mitigation is still voluntary, but local advisory teams that include landowners, farmers, agronomists and extension specialists like extension educator Taylor Becker are working to increase adoption. Becker, an educator with the University of Minnesota in St. Cloud, focuses her research on agricultural water quality protection.

She says farmers with sandy soil versus irrigated soil have more options when it comes to in-season N application: farmers can apply N up to the V12 stage. Farmers with fine-textured soil, or soil that isn’t well-drained, should stick to applying before V7. “It’s a hard thing to manage, so give yourself some grace,” she adds. Because every farm has unique conditions that impact N losses, farmers can develop their own best practices by doing their own trials.

“You can be in a field and your neighbor has more finely textured soil and that will completely change how the nitrogen moves in that system. That variability can be pretty stark. That’s one reason why doing replication is so important on the university side. That being said, you can’t account for everything [in research trials] – if your field is no-till or not, or if it’s continuous corn or rotated – these factors can be really important and affect N management. You can’t account for all of that variability, so that’s why on-farm trials are really important,”
she says.

Fernández says farmers should keep it simple and collect at least two to three years of data to see how different application sources and methods work on their farms.  “A lot of the responses farmers get are so related to specific conditions in their field. As long as studies are done correctly at the local level, there’s no substitute for that level of specificity,” he says. •

Related
Troubleshooting your compost pile
Greener pastures?
On the ground at Agritechnica
Manure Minute: Why you need a manure management plan
Tags