A two-part system for the barn that helps clear the air. 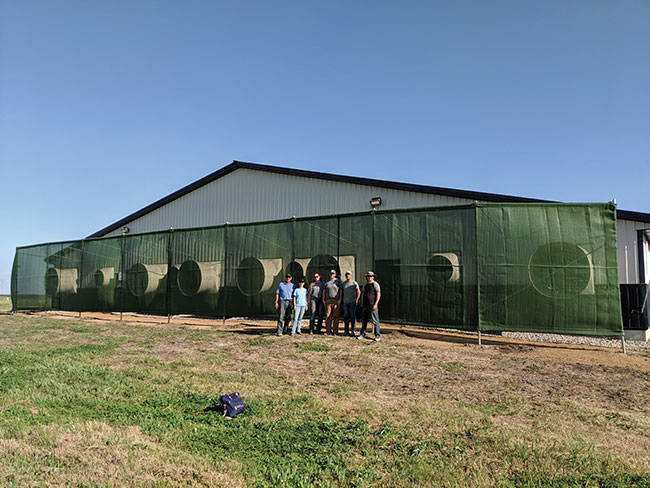 The corona wire, made out of the same material as the ion-conducting corona pipe, is installed directly outside the exhaust fans of the barn so it can ionize the air as it leaves the barn. Photo courtesy of EPI Air.

As complaints about odor emissions increase, poultry and swine producers have come under increasing pressure to reduce their impact on the surrounding areas. These emissions (comprised primarily of ammonia, hydrogen sulfide, volatile organic compounds) are not only odorous, but have potentially harmful effects on the environment and the health of both humans and animals.

As a result, numerous technologies promising to solve the smell problem became available. In 2011, one product was the focus of a study was conducted by Texas Water Resources Institute (TWRI). The study was to determine how effective the new technology was at reducing odors, dust, and gas emissions from a commercial poultry farm.

The technology, developed by John Baumgartner of EPI Air was a twofold system comprised of an Electrostatic Particle Ionization (EPI) system and a Bio-Curtain.

The first phase, the EPI technology, is for inside the barn and comprises four basic elements: a power supply, corona pipes, a high voltage (on/off) switch, and a motorized winch. Once installed, the rows of sharp-pointed stainless-steel corona pipes and a high voltage power supply are used to generate an ionization field within the barn. What this system looks like is steel bars suspended from a barn ceiling, spaced equally apart and depending on a producers’ needs, usually hanging about 50 inches above the floor. The high voltage switch can turn the system on and off and the motorized winch can change the height of the corona pipes, both switches allowing a producer to get into the barn to do chores. When on and charged, the EPI system creates an electric field of negative charged ions. These negatively charged ions attach themselves to the molecular structures of ammonia and other particles. These highly charged particles then either grounded themselves and dissipate, or would aggregate into larger particulates which would be attracted to a grounded surface.

The EPI in-barn technology was then used to create the EPI Air Filter Wall technology. By replacing the corona pipes with a corona wire, and installing it directly outside the exhaust fans of the barn, the filter wall is able to ionize the air as it leaves the barn. This forces all the exhaust air through the same ionizing field as the in-barn EPI systems.

The next phase was the Bio-Curtain – a wall of 3D-geotextile fabric attached to metal frame fencing which ran on the outside of the barn in front of the exhaust fans. The exhaust fan blew the air through the Bio-Curtain, particulate matter was filtered out, and then either settled on the ground or stuck to the fabric, cleaning the air that was released from the barns. The aggregating effect of the EPI field caused the particulate to be much larger, allowing a looser mesh to have a much higher impact.

Flash forward to 2019, the EPI and Bio-Curtain technologies advanced from their earlier versions after several rounds of fine tuning.

One adjustment was the corona pipe height in the in-barn systems. Victor Munsen, the chief operations officer of EPI Air, explains how the switch in height came about. “Pretty early on, [the inventor] John was able to optimize the height of the corona pipes. The corona pipes running the length of the barn put out very large quantities of negatively-charged ions into the air, and tend to precipitate dust very quickly . . .[But,] John determined that impact was even greater if the corona pipes were installed around chest level.” Putting the system at chest level wasn’t immediately accepted with open arms. Even though there is a winch switch system that can lift the corona pipes up, farmers sometimes felt uncomfortable. “They’re not going to hurt anybody, I’ve run into them myself,” Munsen reassures. “They do wake you up.”

Munsen points to one example where a customer has specifically used the EPI Air Filter Wall to help contain the spread of disease. “We have a client that specifically installed the filter wall because, whenever they got new pigs in their quarantine barn, the neighboring barn would get a spike in illnesses,” Munsen recalls. “After it was installed – although they did not conduct a study – they reported to us that they have not had any incidents since.”

For those farmers more concerned about their exhaust air than the in-barn environment, EPI Air also upgraded the EPI Air Filter Wall from its early design.

“What we did to make this filter wall was take the corona pipes from the in-barn solution we had and turn them into wires, just for ease of installation and weather resistance. We then installed them across the air flow for the barn in front of the Bio-Curtain,” Munsen explains.

Baumgartner replaced the original material with a 3D geotextile fabric, now referred to as the EPI Air Filter Wall. The new generation of geotextile can hold a small charge. When that geotextile is constantly exposed to the ionizing field of the corona wires, it retains that charge. That charge improves its ability to interact with the charged particles after they pass through the ion field.

“Additionally, we no longer do a full enclosure, mainly to ensure we don’t interfere with the exhaust fan’s ability to keep up the airflow running through the barn. We ensure that the top is open, and there’s even a small gap along the sides and bottom to allow air to escape. It’s more of an open system, but the particles still adhere to the wall and the filter wall has lost none of its effectiveness.”

That said, Munsen feels the in-barn EPI Air system shouldn’t be discounted as a way of achieving exhaust air cleanliness. “You have the source of the dust constantly being exposed to the ions, and therefore, you are constantly knocking the dust down and reducing the odors. Your exhaust is automatically going to be cleaner.”

Study of the next evolution

In 2018, Iowa State Farms installed an EPI Air Filter Wall and had Iowa State University conduct a study to see how effective the system was. John Stinn of Iowa Select Farms reported the results in a presentation at the Iowa Pork Congress held in January 2019. They found that using the EPI Air Filter Walls and planting a finishing screen of trees and shrubs reduced odor by 50 percent. “The general response from neighbors is that, right around the farm, it smells nice,” he said.

A much larger outdoor system is being installed in Wisconsin. Five 400,000-head poultry barns are under construction. The litter from these barns will be conveyed to a 600-foot barn. From the outside, the system looks like green mesh running along the back of the barn.

“We’ve got three corona wire there, stacked vertically,” Munsen explains. “As the air passes through them, they charge the air, and then it impacts the geotextile, and from there, essentially it would be trapped and stop a lot of the dust.”

The system is fairly simple to install and low maintenance, according to Munsen. He says four people are able to install a system on a 100-foot barn in less than two days.

In Stinn’s presentation at the 2019 Iowa Pork Congress, he brought up how easy it was to clean off the fence – just use a hose if the rain hadn’t already taken care of it. Stinn added that they did a more thorough cleaning every six months when they cleaned the whole exterior of the barn. But Munsen agrees, “Usually a good, strong rain keeps it clean.”

The Filter Wall runs 24/7 and uses very little energy. “This is one of the reasons why the farmers found it more amenable than the full in-barn installation,” Munsen says. And the power supply is easily accessible in the back of the barn.

Today, the system is used primarily by swine and poultry owners, looking to reduce particulate matter and odor on the exhaust-end of their barns. Beyond inlet and outlet air, the EPI Air Filter Wall is also being considered to help reduce the spread of contaminants.

“Use of the EPI Air Filter Wall to condition inlet air is now considered by poultry producers to help reduce any contaminants coming in to the barns,” Munsen says. “The poultry industry is considering this product to improve bio security for more modern farms.”