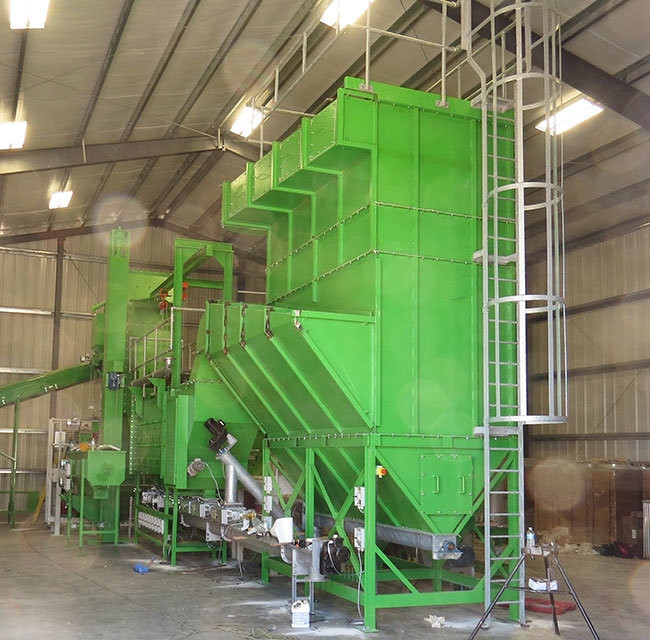 The $3 million poultry manure-to-energy demonstration project recently installed in Maryland by Irish-based Biomass Heating Solutions Limited (BHSL) shows that its technology can produce heat and electricity from poultry litter generated by local farms, just not as easily, consistently, and cost-effectively as in Europe – yet.

What BHSL has discovered in its participation in the demonstration project – based on a broiler operation near Rhodesdale, Md., owned and operated by Double Trouble Farm – is that the consistency and quality of the raw poultry litter typically generated by Maryland poultry producers requires additional management of the raw manure feeding its fluidized bed combustion technology.

“The first step is the successful completion of the demonstration project so that we can adjust the machinery and engineering necessary to combust the litter coming from U.S. farms,” said Ken Le Faive, BSHL president for North America.

“Once that is done, then we can realize the environmental and production improvements to the flock,” he added. “Once we have those baselines established, then we can establish how we will commercialize it, although I believe that we are well on our way.”

The biggest challenge BHSL has experienced using the litter generated by Double Trouble Farm is the vast amount of foreign objects found in the crusted poultry manure. This has had a significant impact on how consistently the system has worked so far.

“We’re talking chains, screws, vice grips, and rocks the size of your hand found in the litter,” Le Faive said. “So, when that material was processed, it is not something that our machinery was designed to handled. We’ve had to make some modifications on how we feed the litter into the unit, and we need to account for a high number of stones.”

To address this issue, BHSL has installed an 800-pound magnet on one portion of the conveyor system to catch metal debris, as well as various types of screens to capture rocks. While they have managed to capture most of the debris, some still manages to get through.

This manure-to-energy system was developed about 15 years ago in Ireland by the O’Connor family, poultry producers faced with the identical challenge as some U.S. poultry producers – they were no longer allowed to land apply poultry litter. They developed and verified the technology, and created BHSL to market the system. Currently, there are 11 BHSL systems installed on poultry farms in the United Kingdom and Ireland.

The Double Trouble Farm demonstration project is BHSL’s first foray into North America and is one of six projects partially funded by Maryland’s Animal Waste Technology Fund. BHSL has received $970,000 from the fund toward the construction of the Double Trouble Farm project as well as $139,000 to monitor the operation for one year. The project’s goals are to demonstrate this combustion technology, test its applicability to North American conditions, and heat two poultry barns with a projected output of 526 megawatts of power annually.

Maryland is the ninth largest poultry producer in the U.S., with the industry providing 41 percent of all farm income in the state. While a major contributor to the state’s economy, seepage of nutrients and build-up of phosphorus in soils when poultry litter is land applied is presenting the state and poultry producers with major challenges. That’s why the state wants to fund projects that demonstrate alternative disposal methods.

Le Faive said he is optimistic the system has now been sufficiently tweaked so that it will provide the required heat for the two test barns and eventually will be capable of providing heat on a consistent basis to all four poultry barns where the project is located. Prior to this installation, the barns were heated with propane. The BHSL system provides barn heat from hot water.

While the system can produce both heat and power, Le Faive added there is no doubt that for an installation of this size, the benefits are significantly reduced barn heating costs and improved ventilation, resulting in healthier birds that convert feed more efficiently.

“If the birds are in a better environment, they are going to convert the feed better and that puts more money into the farmer’s pocket directly,” he said.

The system does have a diesel-fueled backup boiler to supplement peak heat demand and as a safety measure.

Double Trouble Farm is owned by Bob Murphy and his sons, Brad and JB. After working more than 30 years for the local power company, Bob started the poultry operation in 1999 with two barns. With his sons showing an interest in the business, the operation has now grown to 16 poultry barns, with each barn capable of housing up to 43,000 roaster chickens raised under contract for Montaire. The flocks are rotated out of each barn every nine weeks.

Recognizing how professionally the Murphys operate their business, the state and the Chesapeake Bay Foundation met with them to encourage the farm to participate in a manure-to-energy project.

The Murphys said they eventually agreed to the project as long as it had the potential to generate both heat and electricity. They were also interested in the ash produced as a by-product of the combustion process since the small volume produced could potentially be land applied.

The main challenge has been the different quality of raw poultry litter between Europe and North America. In Europe, poultry barns have cement floors and are cleaned out completely between each flock rotation. In Maryland, barns have dirt or clay floors with a build-up of poultry litter on top. Crusting takes place between each nine-week rotation, where only the top layer of the poultry litter is removed. Murphy said they remove about 50 tonnes of manure from each house during the crusting process. They wait nine years for a complete barn clean-out.

The BHSL manure-to-energy system starts with removal of the mature flock, the crusting process, and the crusted litter placed into storage. An automated rake pulls the raw material from storage and onto a conveyor.

“Ideally, the moisture content is going to be anywhere between 35 percent and 50 percent, which is fairly typical of what we are seeing here, now that we have run our system for a few flocks,” La Faive said.

The material is conveyed into the fluidized bed combustion chamber, which is a self-sustaining combustion process that does not require an additional energy source once the process has started.

Murphy said one of the challenges he has witnessed is that the farm’s manure is wetter and heavier than what BHSL would typically encounter in Europe. This has resulted in some combustion issues as the project has ramped up. He warned BHSL this would be an issue, based on his tour of a BHSL installation in Ireland.

“The deal was that we would be able to burn eight to ten tons of manure per day with this unit to heat four houses and generate electricity that would go back on the grid,” Murphy said. “But we are having trouble doing that. I think the unit is capable of doing that, but I just don’t think they have the engineering people here to have it fired up right.”

While he understands it is a demonstration project, he still wants it to work properly, adding when the system works properly, the benefits are obvious.

“When you walk in there, you get no whiff of ammonia. The birds are a lot more comfortable. You don’t have the carbon dioxide from the propane heaters. It’s a totally different atmosphere for the birds.”

That’s why he is eager for BHSL to succeed with its project so the system works consistently as advertised.

The system heats hot water through a series of heat exchangers, which is transported to provide heat to the barns. Excess energy is used to generate power using the system’s Organic Rankin Cycle (ORC) technology. The ash by-product, which is about one-tenth the volume of the raw material, contains a high concentration of potassium and phosphorus. It is collected in bags and marketed as a soil amendment.

BHSL has also learned that, because European poultry producers remove the litter every flock rotation, it does have higher energy value in the manure-to-energy conversion process.

La Faive said BHSL understands this is a demonstration project and work still needs to be done to develop the economic model of how the technology could be used on small, North American poultry farms.

What BHSL has determined is that a better, straight-across application of its technology in the U.S. is in layer barns, where manure is collected and conveyed directly into storage sheds, eliminating the floor litter consistency issue. The company hasn’t given up on poultry production application of this technology at the same scale as the Double Trouble Farm demonstration project. But it wants to carefully analyze the data gathered from this project to provide U.S. poultry producers with a realistic business proposition based on how litter management is typically conducted this side of the Atlantic.

Murphy said simply adopting the European poultry production model in future barns is not economically feasible as it would more than double the cost of the buildings. It would also be difficult to find a sawdust supply for 16 barns every nine-week rotation.

He’s eager to witness the system operating consistently throughout a nine-week rotation, consuming eight to ten tonnes of manure per day, and providing a better environment for the roasters. BHSL believes it has now addressed the litter consistency issues so that the system will operate to Murphy’s satisfaction.

“I think there would be a big market for BHSL if they could get this technology to work properly,” said Murphy.