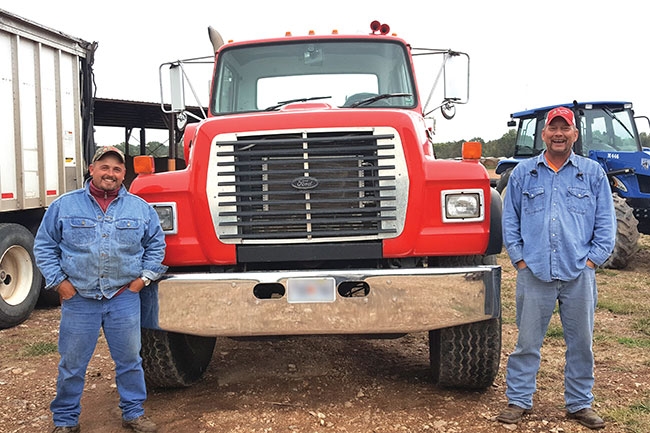 Custom nutrient management contractor, Pierce Litter, understands that not all poultry litter is the same. The moisture content and nutrient content can vary widely depending on whether the poultry producer is raising boilers, hens, pullets, hens for table eggs, or turkeys.

The company, owned by Mark and Dianne Pierce and headquartered in La Russell, Miss. about 50 miles west of Springfield, offers poultry house clean out, litter removal, hauling, and land application.

“We’re sort of a turnkey operation here,” Mark says. “To my knowledge, we’re the only ones in this tri-state area that do the entire thing.”

Dealing honestly with nutrient content has built a lot of trust between Pierce Litter and their customers. They understand what crop is likely to benefit the most depending where the poultry litter was gathered, and how to market their pure or blended poultry litter as an organic fertilizer alternative to commercial fertilizer accordingly.

“There are so many different kinds of litter and that is where experience comes in,” Mark says. “People have no clue . . . there’s a lot of different applications for the litter for different farmers.”

Their knowledge, combined with the ability to seamlessly connect the dots between manure producers and manure consumers, with an equipment fleet that gives them the ability to clean poultry barns on the one end and land apply the manure on the other end, has resulted in an unqualified business success.

The company has a prime location in southwest Missouri, situated in the middle of one of the most active poultry and crop production areas of the United States. It is at a geographical crossroads, with most of Missouri behind them and Kansas, Oklahoma, and Arkansas, just a short distance from home. Location has proven to be an important business advantage. They conduct business within about a 150-mile radius from home.

Mark says that about half of their litter purchases come from Missouri, with about 45 percent from Arkansas and five percent from Oklahoma. In terms of sales, 60 percent heads to Kansas and 40 percent stays in Missouri.

Prior to entering the custom nutrient management business, Mark and Dianne owned and managed three 600-foot hen houses. It required a lot of long hours to operate the business successfully and the barns also generated a lot of manure-laden litter. So, they bought a few pieces of equipment to help them manage that part of the operation on their own, spreading it on their own land. Neighbors started showing a lot of interest in how they managed their manure.

They started out like many other nutrient management companies, piecing out some of the work, but then decided to finance and take on the entire clean out and land application functions themselves as a turnkey operation. That also involved building many customer relationships among litter producers and litter consumers, which is the backbone of their business today.

In addition to operating a professional nutrient management business, Mark and Dianne also own a herd of 200 beef cattle. That’s because right close to home, there aren’t a lot of poultry barns, with their local county having the largest number of cow-calf producers in the state. But there is a massive amount of poultry litter produced by some of the largest company farms and poultry producers in the U.S. just south of home in both Missouri and Arkansas.

“They have absolutely saturated northwest Arkansas and southwest Missouri with poultry,” Mark says. “They are just everywhere.”

Lately, however, companies are working toward less concentration as a biosecurity measure, meaning more poultry barns spread out over a larger geographic area.

Complementing that large poultry industry footprint are plenty of organic fertilizer buyers among the large farming community in both Missouri and immediately west among Kansas corn producers. Over the past five years, Pierce Litter’s nutrient application business has more than doubled in Kansas alone.

“That area out there is just starved for litter and they have a little bit better crop ground,” Mark says.

Part of the reason they are starved is that there are only a few companies, like Pierce Litter, willing to acquire the transportation permits to supply that area, which has really paid off for the company. Those orders for poultry litter tend to be much larger than closer to home, with some customers taking as much as 7,000 tons annually, making the effort worthwhile, although Pierce Litter still makes an effort to supply local 100-ton orders.

“When the litter business really went crazy was when corn prices went through the roof, when they were getting $8 a bushel,” Mark says. “The row croppers here and in Kansas took every bit of litter that they could get. I had 14 trucks running at one time then.”

Pierce Litter co-owner, Mark Pierce (right), and operations manager, Colby Writer, ensure that enough pure and blended poultry litter is stockpiled in their staging yard to meet the needs of their highly diverse farm customer base.

Lately, however, commercial fertilizer and fuel prices have come down and this has dampened litter prices. When corn was at its peak, the company moved 40,000 tons annually with four million in sales. The business climate changed drastically two years ago when the company moved 70,000 tons with only two million in sales. That required a business adjustment. Recently, Mark and Dianne also reckoned that taking care of their nutrient management business was taking up enough of their time, so after 11 years in the poultry business, they sold their hen houses and some land to focus squarely on nutrient management.

Poultry litter from broiler barns in that part of the U.S. typically have rice hulls or kiln-dried pine shavings mixed in with the manure, which gives it a drier consistency and high NPK content, whereas the manure from egg laying operations tends to be wetter and stickier and have a lower NPK content. Unlike broiler barns, the manure is typically scraped from below the caged egg laying birds and collected in large storage piles. The moisture content alone, depending on the source of the poultry manure, can vary anywhere from 18 to 70 percent and there is also a significant odor difference depending where the litter comes from. There is not only a large variance in litter quality depending on the poultry operation, but from a business perspective, NPK and moisture content also determines the value of that raw commodity.

In some cases, because the poultry producer understands the strong demand for their broiler barn litter, Pierce Litter pays for that litter. In other cases, the manure producer is just happy for the company to cart it all away for free because the nutrient content within that litter is poor, leaving it up to Pierce Litter to find a market for it as organic fertilizer. It is the nutrient management company’s job to play matchmaker, finding a connection between the manure producer on one end and the right manure consumer on the other end, depending on what crop is being grown.

Sometimes, depending on the litter quality, it is not gathered and stockpiled or transported directly to the end user as a pure product. It is transported to the large staging area within the Pierce Litter yard where it can undergo a blending process, which based on their experience, will create the nutrient mix required by their farm customers. For example, they have a customer who purchases 5,000 tons annually that requires a higher phosphorus content. They are able to provide him with that product based on where their litter is sourced and their knowledge of its nutrient content.

They also have a poultry manure product called Decake that is very high in nitrogen, but low on potassium and phosphorus. This product is marketed primarily to pasture owners.

Mark says their experience learning to blend the litter came about sort of as a consequence of so much broiler litter being exported to Kansas. It was all being transported out of state, so this left local farmers out in the cold. The idea of blending alternative sources of poultry litter into a reasonable NPK product came about, and has developed into a reasonably priced product for local farmers.

“I bought a farm and built a big barn on 10 acres and it became sort of a staging area,” Mark says. “We started blending turkey litter, broiler litter, hen litter and pullet litter, and we were able to create our own recipe, and get our NPK not as good as broiler litter, but an alternative for these other farmers who could not afford the broiler litter.”

Last year, they marketed more than 40,000 tons of this product.

“It’s 40 percent of our business now,” Mark says, and although it doesn’t have the high NPK content of the broiler litter, the company also sells it at a cheaper rate. They also stockpile litter product to meet demand once the phone starts to ring off the hook in June each year.

They use Chandler electric over hydraulic, chain-driven, broadcast manure spreaders. Chandler is headquartered in Gainsville, Georgia, and the local dealer is Wilcox Truck Sales located in Lowell, Arkansas.

Mark says that he has used a variety of manure spreader brands but appreciates the Chandler brand because of the excellent parts and service support provided locally. To carry the manure spreaders, Pierce Litter mounts them on older model cement trucks and chassises, “because the suspensions are so stiff. They hold up so much better.”

Their manure spreader trucks are equipped with GPS tracking systems. The tons per acre application rate is generally directed by the landowner based on his soil sampling and controlled by the chain speed, gate opening at the back of the manure spreader, and the truck speed.