MAPHEX (MAnure PHosphorus EXtraction) System, a new phosphorus removal system for liquid manure developed by the USDA, is on the cusp of being commercialized. 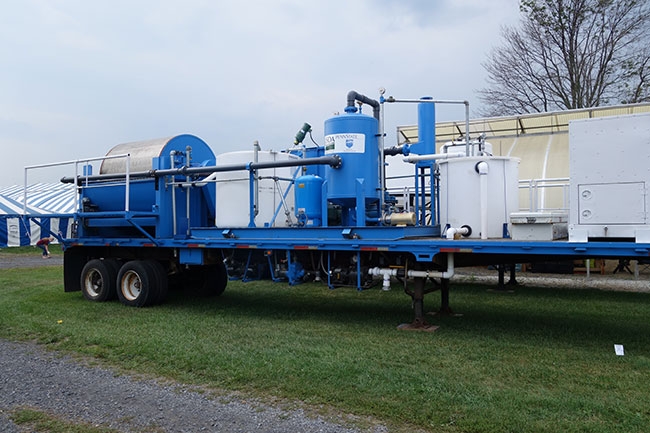 The USDA team finished tests on the pilot scale unit at the start of 2015 and built the full-sized machine later that year. It features two auger presses instead of one, a larger decanter centrifuge and larger storage/mix tanks than the pilot-scale version. Photo by Clinton Church

Farmers and manure managers in North America have known for years that phosphorus is a huge concern, but solutions for handling this nutrient have not come easy. Hauling manure away to locations where fields aren’t already saturated isn’t always practical or cost-effective.
An efficient and economical phosphorus removal system must be possible, one that allows farmers to retain the nitrogen and other valuable components of manure – even to pelletize the phosphorus for re-use as a fertilizer.

Indeed, many systems for removing phosphorus from manure have been developed, but they all remove it by raising the pH of the solution. While this does promote phosphorus precipitation (the formation of a solid from molecules that were previously dissolved in liquid solution) in the form of calcium phosphate or calcium ammonium phosphate, it causes the nitrogen to be lost. It happens when the ammonium volatizes into ammonia, and the nitrogen contained therein is therefore lost to the air – and to the farmer.

Successfully thinking “outside the pH box” was required and that’s just what a team led by Clinton Church has accomplished. With his colleagues Ray Bryant and Peter Kleinman, the environmental chemist with the U.S. Department of Agriculture’s Agricultural Research Service (USDA-ARS) at University Park, Penn., got to thinking about other ways to get dissolved phosphorus out of solution.

“We went to adsorption chemistry rather than acid-base chemistry,” Church explains. “We found that iron and aluminum compounds worked well to precipitate phosphorus, but we still had to figure out how to separate liquids and solids in a mobile system. A mobile solution that could go from farm to farm was always the goal.”

The first step is to feed the liquid manure into an auger press, which works the same way as a screw press and removes bulk solids. (These solids, explains Church, are of value to farmers, who compost them and use them for livestock bedding.) Along with the bulk solids, about 15 percent of the phosphorus is also removed. The next stages, however, involve the capture of basically all the remaining phosphorus. The liquid is fed through a centrifuge into a mixing tank where an iron oxide compound is added, to which the dissolved phosphorus binds immediately.

To remove this precipitate, Church and his team first looked at using a belt press, but this method would require the press to be washed continually, with the water for that either having to be brought to the farm or supplied by the farm, and there would also be the used washwater to deal with. They also looked into adding tiny microbubbles to which the precipitate could attach and then float to the surface to be scooped away, but that method would require tanks too large for a mobile system. Instead, they found the solution in an AutoVac unit, a slowly rotating drum with a diatomaceous earth (DE) filter. The occluded portion of the filter cake is removed with each turn, so that it is ready to filter another ‘load’ of liquid. Operating costs can be significantly reduced by cleaning and re-using the filter.

The final effluent contains virtually no phosphorus, but 90 percent of the original manure’s nitrogen, mostly in the form of ammonium. By running this final material through the half-micron filter, about 90 percent of the bacteria is removed, and with their removal, a significant amount of the odor is removed as well.

The USDA team finished tests on the pilot scale unit at the start of 2015 and built the full-sized machine later that year. It features two auger presses instead of one, a larger decanter centrifuge and larger storage/mix tanks than the pilot-scale version.

The team finished tests on their pilot scale unit at the start of 2015 and built the full-sized machine that year. It features two auger presses instead of one, a larger decanter centrifuge and larger storage/mix tanks than the pilot-scale version.

Portability was the goal for both units from the very start.

“Yes, a larger dairy can have manure pumped out of one lagoon through a stationary on-farm MAPHEX unit and then the reduced-odor, phosphorus-free, nitrogen-rich effluent can go into another empty lagoon,” Church explains. “But smaller dairies need a smaller portable unit to come by every 10 days or so. They would have to install a small 10-day tank.”

One MAPHEX system can therefore service 10 small farms, one a day on a 10-day rotational basis, but a larger farm, such as one with 2,000 cows, could use a portable unit as well – it would just have to stay longer. Church says MAPHEX can process about 150 to 250 gallons of manure in about 10 minutes, depending on the manure.

“We have yet to test swine manure, but it should have a faster flow-through rate than dairy manure as it’s generally thinner and the auger press would likely not be needed,” he notes. “You’d go straight to centrifuge and AutoVac. We did test manure from a settling pond and the auger press was not needed. We have yet to test chicken manure, but it would have to be made into a pumpable liquid. Anything can be run through the system. Acid whey, a byproduct from yogurt production for example, was tested successfully and is listed in the patent.”

At the Wisconsin Farm Technology Days, held in mid-July, the MAPHEX system was very successful in processing anaerobic digestate as well.

The patent is owned jointly by the USDA and Penn State University, and Church has updated the design with various small improvements and further automation so an operator is not required the whole time.

“We have a company called Eisenmann Corporation that is interested in partnering with us on taking it to market,” he says. “Once commercialized, I’d like to see MAPHEX units at dairy processing plants and large dairy farms, with shared units between small farmers or owned by manure haulers. I’m writing the patents now for how the diatomaceous earth can be separated from the filter layer for re-use and the phosphorus in the filter layer can be pelletized. This would help farmers further with reducing daily operation costs.”

Related
Manure than you can handle
Which manure treatments are best?
Register now for 2017 Midwest Manure Summit
Closed-loop concept could be future of sustainable farms
Tags