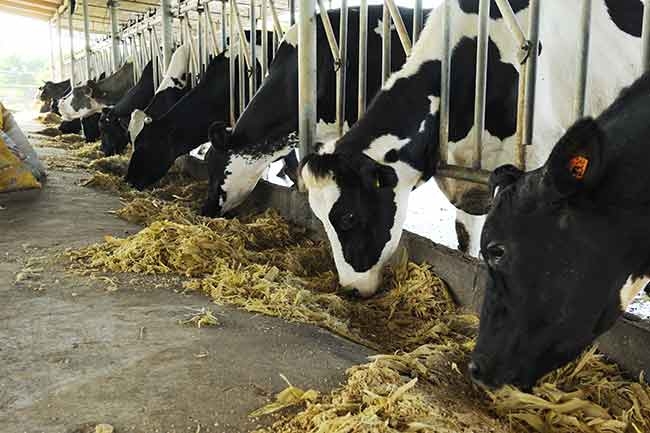 When University at Buffalo chemists began studying waste disposal at a dairy farm in New York State, they thought the farm’s advanced system for processing manure would help remove estrogens and antibiotics from the excrement.

Instead, the scientists found the chemicals largely persisted in the treated materials, which are typically reused as fertilizer and animal bedding on the farm.

The waste management process – an advanced anaerobic digestion system – also converted a less harmful form of estrogen in the manure into a form that may pose a greater ecological threat.

The study underscores how far waste treatment techniques have fallen behind the times.

Hormones and antibiotics, if not removed from waste, can migrate into the environment and threaten wildlife. Estrogens, for example, can enter rivers and lakes, causing male fish to develop female traits – a phenomenon that can harm reproduction. Rogue antibiotics pose a different kind of challenge, encouraging the spread of antibiotic resistance, in which disease-causing bacteria stop responding to drugs.

Even waste treatment systems that are considered to be
state-of-the-art often fail to account for chemicals used routinely in modern society, says University at Buffalo (UB) researcher Diana Aga, who led the new study. She is a professor of chemistry in the UB College of Arts and Sciences and a member of UB RENEW (Research and Education in eNergy, Environment and Water), an institute that addresses complex environmental issues.

“The chemicals we are studying are not exotic,” Aga says. “Antibiotics are used to treat sick animals, and the cows on a dairy farm are females, so they produce a lot of estrogens.

“One of the messages of our work is that even anaerobic digestion, an advanced treatment, doesn’t totally remove these chemicals which may pose a danger to the environment. We need to start looking closely at additional treatment techniques to identify better practices.”

The research, funded by the New York State Pollution Prevention Institute, was published in two recent papers. The first, on antibiotics, appeared Jan. 22 in the Journal of Environmental Quality. The second, on estrogens, was published Feb. 2 in the journal Science of the Total Environment.

The farm where Aga and her colleagues conducted their research is a commercial dairy farm with about
2,000 cows.

The facility uses two techniques to treat manure: pasteurization, which uses heat to remove pathogens, and anaerobic digestion, which employs microorganisms to break down and convert biodegradable matter into products that include biogas, liquid fertilizer and solid matter that is repurposed as bedding for the animals.

Aga’s team measured levels of veterinary antibiotics and estrogens in the waste at various points during the treatment process.

The results for antibiotics were mixed: the scientists found that the concentration of tetracyclines, the most used antibiotics in animal agriculture, was lower in the liquid fertilizer than in the original raw manure. But the reduction was largely due to the tetracyclines migrating into the solid matter, which had higher levels of the drugs at the end of the treatment than the raw manure had at the start. Macrolides and sulfonamides, two other types of antibiotics the scientists analyzed, were found only at low levels in raw manure and were not detected in the treated manure.

When it came to estrogens, “we had hypothesized that the digestion process would remove the hormones, but it didn’t,” Aga said.

Instead, the total concentration of estrogens remained relatively steady.

In addition, the treatment process appeared to convert a less harmful form of estrogen into one with greater potential for disrupting the function of animals’ endocrine systems, which produce hormones that regulate growth, reproduction and other biological functions. Prior to anaerobic digestion, most of the estrogens in the manure (65 percent) were in a form with lower endocrine-disrupting potential. After the process, 72 percent of the estrogens were in a form with higher endocrine-disrupting potential.

Aga notes that each farm has a unique system for processing waste, so it’s possible that a different anaerobic digestion technique or a completely different treatment method could yield better results. The next step in the research will be to explore various treatment techniques to identify best practices.

“When it comes to manure treatment, there are a lot of variables to explore – how much time the manure is treated for during anaerobic digestion, whether the manure is mixed with food waste or not, or whether the digested product is further composted or treated by other means. For farms using long-term storage, it may also matter if the lagoons are covered up or not,” Aga said. “We need to do more research to find out.”