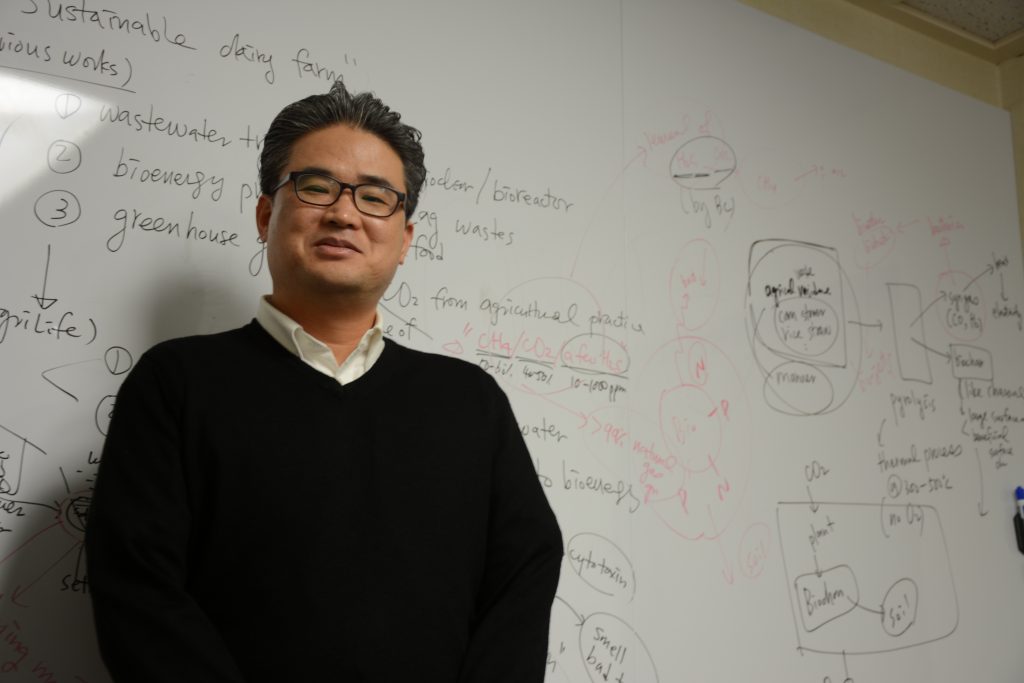 Dr. Eunsung Kan stands in front of a dry-erase board used to explain his closed-loop dairy farm concept and use of biochar to filter wastewater and create electricity. Adam Russell, Texas A&M AgriLife Extension Service

January 23, 2017, Stephenville, TX – Dr. Eunsung Kan sees his concept of a closed-loop dairy farm – which reuses wastewater, emits zero waste and powers itself on manure – as the future of sustainable animal farming.

Dr. Kan, a Texas A&M AgriLife Research chemical and environmental engineer in Stephenville, said his concept could change the way dairies, swine and poultry farms deal with manure, wastewater and greenhouse gasses while utilizing the waste to generate electricity.

Animal waste is a blessing and curse for dairies.

Manure is sold to local farmers who need to infuse nutrients into the soil for crops and forage. However, tons of manure can also be logistically taxing as facilities keep up with the treatment and distribution of large quantities of environmentally problematic materials monitored by state and federal environmental regulators.

Farm operations have been implicated in higher-than-normal levels of nitrogen and phosphorous, antibiotics, heavy metals and hormones in surface and groundwater downstream from facilities. Manure is also a known contributor to greenhouse gas emissions, such as methane and carbon dioxide.

The U.S. Department of Agriculture Natural Resources Conservation Service estimates manure from a dairy milking 200 cows can produce as much nitrogen as is in the sewage from a community of 5,000 to 10,000 people.

Dr. Kan’s research would utilize existing technology – biochar, a carbon material similar to charcoal, created from animal manure and agricultural waste, such as corn stubble or rice straw – that would be used to filter solid waste and effluent. The biochar could be used as a slow-release fertilizer or converted, via pyrolysis, which is the decomposition of organic material by heat, into energy to power the farm.

Biochar has proven to provide a beneficial surface chemistry that can filter a wide range of contaminants, including nitrogen and phosphorous, he said. When the surface of biochar is modified with several methods in a lab, it has shown an ability to capture antibiotics, pesticides, hormones, heavy metals and other possible contaminants.

“The mission is the treatment and reuse of dairy wastewater and the conversion of dairy waste into energy to power the facility,” he said. “It focuses on providing a model for sustainable farming.”

Cows produce manure, which when mixed with remnants of local crops, can become a seemingly endless supply of filtering material, fertilizer and energy.

Columns filled with biochar would act as a water purification system that filters nitrogen, phosphorous and other contaminants from liquid as it passes through, Dr. Kan said.

The biochar used to filter nitrogen and phosphorous could then be used as slow-release fertilizer that provides needed nutrients to plants and would not wash away as runoff from heavy rains. In addition, biochar immobilized with photocatalysts would decompose toxic contaminants to harmless products when irradiated by exposure to ultraviolet light.

For instance, Dr. Kan’s study has shown that a biochar immobilized with photocatalysts completely degraded antibiotic and hormone compounds while effectively controlling pathogens. The potential for biochar’s use to filter wastewater goes beyond agriculture and could be applied at any wastewater treatment plant, or even to filter contaminants in injection water used in the petroleum industry for fracking.

For energy, dairy manure would be fed into a pyrolysis reactor on site that would use relatively low heat, 500 to 1,000 Fahrenheit, to create compressed hydrogen and carbon monoxide syngas that can be used to create electric power, Dr. Kan said. Excess electricity could be sold to local utility companies. The byproduct from pyrolysis of dairy manure is biochar.

“The principle is very simple,” Dr. Kan said. “The dairy would just need a different size reactor to meet its scale of manure output and energy needs.”

Several other researchers and engineers within the Texas A&M system are collaborating with Dr. Kan, and interest in the concept is growing among public institutions and private companies.

Dr. Kan will produce a lab-scale version of the closed-loop dairy to determine the necessary scale for application and experimentation at the neighboring Southwest Regional Dairy Center in Stephenville, a privately owned working dairy operated by Tarleton State University used for educational purposes. He hopes to have a system, including the pyrolysis reactor, operating at the dairy within three to four years.

“Having the dairy farm here provides a good opportunity for field data,” he said. “The field demonstrations will help us work out any problems that might arise at the various scales that might be applied by commercial animal farms.”

The dairy produces milk that is processed for consumption and into products such as cheese and yogurt and sold in local grocery stores.

Clay Dameron, the dairy’s waste manager, said between 300 to 400 cows are milked daily. Those cows produce manure and effluent that is treated via a conventional lagoon system. Around 90 to 130 tons of solids are moved to nearby croplands and pastures every three weeks where it’s used as fertilizer. Treated liquids from the lagoon are dispersed via sprinklers in nearby fields.

Dr. Kan said he believes the closed-loop system will prove to be a logistically and financially viable model for dairy producers to implement in the future. He expects his pilot project at the regional dairy to produce data that will draw more interest and investment from public institutions and private companies.

“It is very exciting,” he said. “I look forward to working with my collaborators and colleagues to make this concept a reality that could change the way dairies operate by providing a self-sustaining, environmentally friendly model.”