Including worms in the composting process can mean added nutrients and dollars. 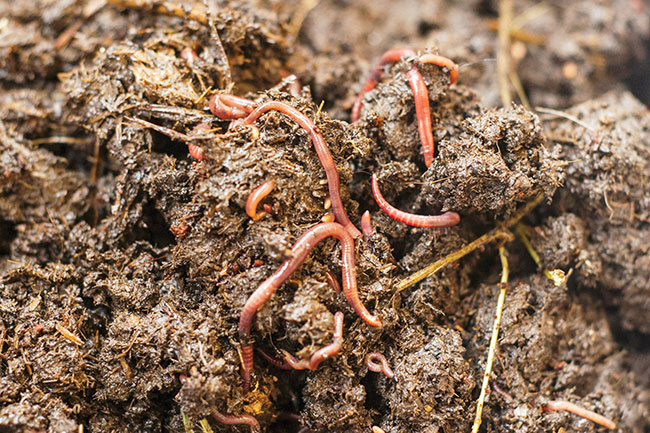 Eisenia fetida, commonly referred to as “red wigglers,” are the worm of choice for most vermicomposters. © Elena Yakovleva / adobe stock

Rhonda Sherman, extension specialist in the department of horticultural science at North Carolina State University, is widely regarded as a leading authority on vermicompost. At the start of her career, she focused on recycling – the shift to vermiculture happened with one of her first publications, titled “Worms Can Recycle Your Garbage.” The paper was wildly popular, and suddenly Sherman had a new direction.

“I’ve gotten a lot of ribbing over the past 27 years but, I mean, it just took on a life of its own,” Sherman says.

Vermiculture uses earthworms to assist in the composting process. “Basically, micro-organisms and earthworms work together to decompose organic material and then turn it into something that is valuable and can be used as a soil amendment to enhance plant growth,” Sherman explains.

“The whole aim of composting is that the organic materials get processed by micro-organisms, but their activity generates heat, and the heat rises in the compost pile. And if it reaches certain temperatures, then it can kill pathogens and seeds, which is really great. You start out at ambient temperatures, which are mesophilic temperatures,” Sherman says.

“Once you reach 105 F, it switches to thermophilic temperatures, and different micro-organisms are involved at that point. It maintains that high temperature for a while and it’s doing those great things – decomposing, killing E. coli, salmonella and other pathogens, and killing seeds, whether they be weed seeds or food seeds.

“Once most of that material gets consumed, the temperature drops back into mesophilic temperatures again, but you have to let that compost mature and stabilize,” Sherman explains. “You can’t take that hot compost and apply it to soil because it would kill the plants due to the high temperatures, but also because the organic material needs a few months to stabilize and mature.”

During this curing process, the pH of the compost pile stabilizes and the C:N ratio and organic acid levels are lowered, among other changes taking place.

Vermicomposting, on the other hand, is a “cold composting” process, in that temperatures never rise above the mesophilic range.

“Between 60 and 80 F is the sweet spot for vermicomposting,” Sherman says. “By keeping it in that lower mesophilic temperature range, there are greater numbers and greater variety of species of micro-organisms. It’s really beneficial in so many ways. And because the food is ultimately consumed by a living being, it comes out the other end stable and ready to go, so you don’t have to cure it or have it mature or stabilize.”

The nutrient quality of vermicompost is better than compost, as well. The heat generated by composting micro-organisms that kills pathogens and seeds also kills off some of the beneficial micro-organisms. In the cold compost process, these micro-organisms increase the diversity of microbial life added to the soil, improving plant growth, root system development, soil health and yield. 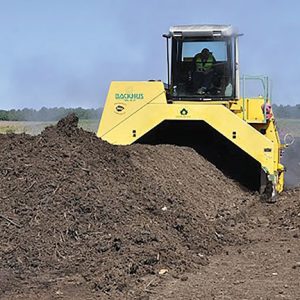 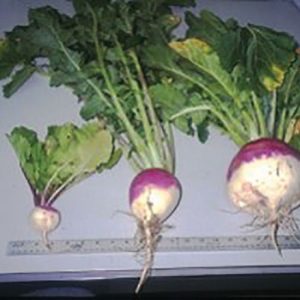 Turnips taken from a field trial conducted at North Carolina State University with randomized plots of (from left to right) zero, 10 percent and 20 percent by volume vermicompost mixed into the soil. All treatments had equal amounts of nitrogen. Photo courtesy of J.M. Rice. 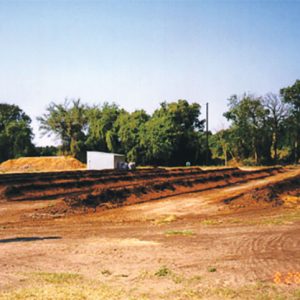 Vermicomposting windrows at a farm (less than knee-high). Photo courtesy of Rhonda Sherman.

“Plus, there are plant growth hormones, lots of humic and fulvic acids – just a variety of extra things that are in vermicompost, so it does make it that much more valuable,” Sherman adds.

This is reflected in the price for which you can sell the two, too. “In the United States, if you are manufacturing compost, and you go to sell it, you can get up to $30, sometimes $35 per cubic yard – but that’s it. So, it ranges from zero to $30 per cubic yard. If you make vermicast (the product of vermicomposting), you can sell it for between $200 and $1,000 [per cubic yard].”

The vermicomposting process is much quicker, too – while a compost pile can take six to nine months for the whole process to take place, vermicomposting accomplishes it in two to three months.

However, the scale on which the two methods can produce compost is quite different. Composting piles need to be large in order for heat to be adequately maintained for thorough decomposition. Piles can be upwards of 10-feet tall and as wide as space allows, so a lot of compost is produced at a time. Vermicomposting is constrained by the need to keep heat low.

“It needs to be a shallow process. It should be less than two feet tall, so the problem is it takes up a lot of horizontal space,” Sherman says.

“You only go up to two feet tall, and the width should be limited as well – no more than eight feet wide – because you need to stand on both sides of that pile and be able to look into the middle of it. You need to put your eyes on all parts of the pile, so that you can check the conditions for the earthworms.”

There are numerous benefits to vermicomposting, but Sherman cautions that anyone interested in including worms in their operation should understand the learning curve involved.

“It’s not about the equipment. It’s about earthworm husbandry,” she says. “[Livestock farmers] have goats and chickens, sheep, cows and hogs that they’re dealing with, which they can see, unlike microbes. And they’re very attuned to animal husbandry; they understand that, ‘I need to do this, this and this to help this animal to thrive,’ and the basics are food, air, water, shelter. The thing is, micro-organisms and earthworms need those very same things.”

Of the 9,000 species of earthworms, only seven have been deemed suitable for vermicomposting, and one is used more often by people around the world because of how adaptable it is.

“Basically, you’re taking a wild animal and you’re saying, ‘Okay, stay put,’” Sherman says. “So, you have to have the right conditions for them. And Eisenia fetida is less picky, you know, they tolerate a wider range of environmental conditions than other earthworms.”

Eisenia fetida, commonly referred to as the “red wiggler,” is a surface-dwelling worm that will make a meal out of decomposing organic matter it finds: leaf litter, food waste, manure. As such, vermicomposting boxes should contain organic bedding rather than soil.

Sherman recommends starting small to understand how to manage the worms before trying a farm-wide operation.

“For some reason, people think they can just buy 10 or 50 or 100 pounds of worms – and there’s about 1,000 worms in each pound. That’s a lot,” she says. “To me, it’s a waste of money to buy a huge amount of worms right off the bat, because there is animal husbandry involved. You really have to get up to speed on what it’s like to raise worms. It doesn’t always go perfectly. There are things that can go wrong.”

Even for experienced vermicomposters, the possibility of things going wrong needs to be considered. The heating process that occurs in composting reaches temperatures that kill seeds and pathogens, but vermicompost doesn’t get hot enough to do the same. Sherman says there are some studies that show pathogens consumed by the worms are greatly diminished when converted to vermicast. However, she is firm in saying that the possibility of error, human or otherwise, makes it impossible to claim there are no pathogens in vermicast.

Farmers that use organic material sourced solely from their farm and use the compost produced on their own farms are generally exempt from regulations that would apply to farmers selling their compost to others.

For those interested in learning more, Sherman has a wealth of resources on her North Carolina State University Extension website. Her book, The Worm Farmer’s Handbook, specifically discusses how to go about vermicomposting at farm-scale. As people from 117 countries around the world can attest, Sherman herself is an excellent resource, as she is contacted regularly about vermicomposting.

“People on every continent have contacted me, except for Antarctica. It truly is happening all over the world.”