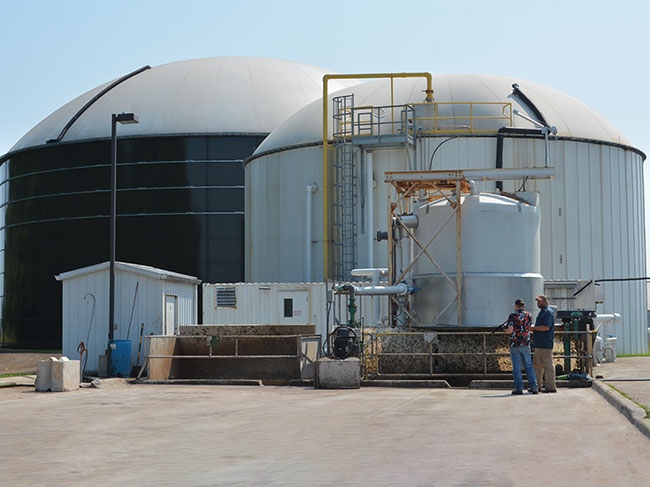 Producers in Michigan are expressing increased interest in adding anaerobic digesters (AD) to their operations, driven by on-farm benefits, additional potential income sources, and a desire to make their operations more sustainable. When all the costs and benefits are laid out, it becomes clear that the choice to construct an AD in Michigan is not a simple one.

Anaerobic digestion in Michigan
Interest in anaerobic digestion in Michigan is not new – a handful of systems were built in the early 1980s as a result of the energy crisis in the 1970s. Although one system operated for over 20 years near Sturgis, most of them only operated for a few years because of low energy prices, lack of environmental drivers and operating and maintenance issues.

“People weren’t trained on how to operate them and they weren’t designed to integrate nicely into the farm,” explains Dana Kirk, the manager of the Anaerobic Digestion Research and Education Center (ADREC) at Michigan State University. “Farms used sand bedding and there would be grit in manure, so the digester filled up with grit. There weren’t any provisions made to address how dairy operated.”

More recently, six systems were constructed on dairy farms in the late 2000s, five of which continue to operate. Michigan State University built plug flow and complete mix ADs in 2010 and 2012, respectively.

“This round is going much better,” Kirk says. “Our farms are better engineered today, so process flows are easier and things work better. We also have technologies, like sand separation, to remove that on the front end and better tools to help us see what’s happening.”

Training has also helped. There are now operators who have gone through specific training to understand the mechanical parts of the digesters. Michigan State University ADREC is the in-state training option, offering a three-day AD operator training program that provides guidance to AD operators, enabling them to safely maximize biogas production and system life.

State policy and support
At this time, Michigan doesn’t provide support or incentives for adoption of ADs or biogas production. “Renewable energy in Michigan currently tends to be produced from other sources, such as wind and biomass,” Tess Van Gorder, associate policy and regulatory specialist in the Agricultural Ecology Department with the Michigan Farm Bureau, says. “But I do think conversations are starting to happen more frequently in regards to on-farm digesters and municipal digesters.”

Kirk adds that the low price paid for existing RNG projects and the fact that no new projects have been constructed in more than five years indicates that RNG is simply not prioritized in Michigan at this time. The energy potential of Michigan’s producer operations is considerable: Michigan dairy farms collectively care for an estimated 428,000 cows, and every 100 lactating cows generate 200 to 300 kilowatt hours of electricity per day, enough energy to power 15 houses per day.

“Renewable natural gas produced from anaerobic digesters can be sold to California at a premium due the value the LCFS places on it,” Van Gorder explains.

Mark Hill, vice-president of Dairy RNG operations at DTE Biomass Energy, adds that dairy RNG is highly valuable in the LCFS program because of its ability to capture unregulated methane to generate project credits.

“California views methane emissions from dairy manure lagoons as a significant source of greenhouse gases, and as a result, dairy RNG from captured methane is considered to be a negative carbon intensity fuel,” Hill says. “Because value is based on the carbon intensity of the fuel, dairy RNG projects are seen as removing greenhouse gases and, therefore, generate significant value.”

Should Michigan reconsider the value of RNG as a source of green energy and sustainable development, there are several states it could take as a model. “In North Carolina, energy production from swine waste is a part of the Renewable Energy and Energy Efficiency Portfolio Standard,” Van Gorder says. “Which has helped incentivize electric power production on farms, in part, from anaerobic digesters.”

Cost and ROI
Kirk says, for the current interest in biogas-to-RNG, producers are looking at a $7 to $15 million investment for a 3,500-cow dairy. While the investment is huge, the return on investment can be as low as two years, although he says it will more likely be three to five years.

Potential on-farm benefits include the production of renewable energy that can be used on-farm to offset energy costs, and the reduction of manure-based pathogens, odor and GHG emissions. The product of the anaerobic digestion process, the digestate, can also be used on-farm. Since nutrients from the manure remain in the digestate, it is often used as a fertilizer; if separated out, the solids can be re-used as bedding.

Hill says the financial decision to add an AD to a dairy farm is very complex and is driven by a number of aspects, including herd size and type, milk production per lactating cow, current manure handling practices, manure consistency, bedding type, financial stability of the dairy, access to a natural gas pipeline, ease of permitting digesters and RNG and utility access in the area.

“Farmers may need to obtain water or air permits, or make changes to existing National Pollutant Discharge Elimination System (NPDES) permits to add digesters to their operations,” Van Gorder says. “Additionally, some labor laws differ between farm and non-farm employees so farmers will need to be careful about classification of their workers.”

While there is interest in anaerobic digestion in Michigan, Kirk says there is a combination of factors that have Michigan producers being cautious when considering the investment. These include low commodity prices, lack of State drivers to generate renewable energy, confusion over Federal and other State policies and a history of AD-related challenges. Integration is also a challenge.

“Sand bedding is a big issue since it is commonly used on our dairies,” Kirk says. “Installing with a new operation is less expensive, assuming the dairy is located near a natural gas transmission line. Another potential barrier to systems is access to electricity. Gas upgrading and compression systems draw significant energy loads.”

Van Gorder adds cost and operations and maintenance to the list of challenges.

“Digesters are expensive and need to be monitored closely,” she says. “There are many parameters that need to be watched to ensure the digester is operating correctly, in addition to keeping up with maintenance and maintenance costs.”

Digesters are designed to take advantage of economies of scale inherent in large dairy and swine facilities, which puts them beyond the budget of mid-sized and small operations. However, that hasn’t dissuaded every smaller scale producer.

“The current markets are focused only on the largest farms, but it has been mostly medium-sized farms that have reached out to me for guidance and support,” says Kirk. “Factors that are attractive to those farms are of course new revenue lines, but also sustainability and the ability to demonstrate to their communities that they desire to be good environmental citizens.”