Features Compost
Back to the earth

After processing plants closed due to COVID-19, some livestock producers looked to composting as an option for disposal. 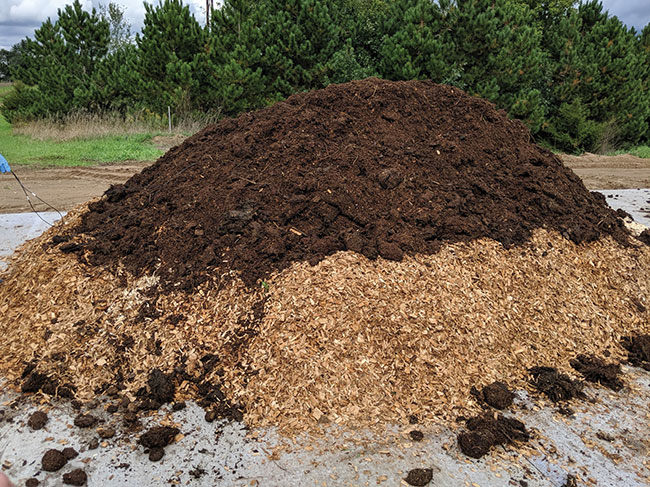 Composting deadstock isn’t a new practice, but it’s become a solution for livestock farmers with surplus animals in the wake of COVID-19. Photo courtesy of Melissa Wilson.

Even now as processing plants re-open, new regulations limit the volume of animals that can move through. It illustrates what happens when one link in the chain is damaged: loss of food, loss of income and a heart-wrenching problem.

Cattle farmers have been able to put animals onto pastures to graze, but hog and poultry farmers don’t have that option. Hogs in particular grow too large for processing facilities quickly and, if let loose, become an unmanageable feral issue.

Before long, new piglets come in and, even if their continued growth could be stalled, there is nowhere to house the hogs ready for processing. With limited barn capacity, producers are left with the unenviable option of euthanizing the surplus hogs. No one envies a farmer facing this situation. Yet even after euthanizing, another challenge remains: what to do with the deadstock?

Minnesota is home to a strong agricultural sector, including significant hog production. Several thousand animals have been euthanized in the state due to COVID-19, according to Dave Preisler, CEO with the Minnesota Pork Board. He notes that, due to the large volume of animals, many options were used to deal with the carcasses.

As is the case in most places, disposal of euthanized animals in Minnesota is permitted in five ways: burial, composting, incineration, rendering and landfill.

Farmers have long used composting to dispose of deadstock, though it’s unlikely many have dealt with such large quantities at one time. Melissa Wilson, assistant professor in the department of soil, water and climate and extension specialist with the University of Minnesota, has been part of a team helping to spread the word on composting as an option for mass disposals and how to do it right. In addition to university staff, other agencies – such as pollution control and environmental control – were also involved.

“I work with a group,” she says, of the Livestock and Poultry Environmental Learning Center. “We talk about what some of the up-and-coming issues are.”

Wilson says that, even in February, there was discussion surrounding how COVID-19 could interrupt the chain of food-supply animals. In April, it became obvious that a number of processing plants would experience closures.

“The end of April is when we realized this was going to be a pretty serious situation,” she says. “Having to [euthanize] is the last thing that anyone wants to do. They put a lot of investment and time into those animals.”

She sees composting as beneficial, because it allows farmers to put nutrients back into their land, whereas other options provide no real return and often come with additional costs.

Some even see composting deadstock as the best solution because there is no need to excavate the land, according to Michael Crusan, communications director with the Minnesota Board of Animal Health. It requires only a base layer and top layer of carbon material to enclose the carcass.

“It’s a natural recycling benefit,” he says. “We see it as one of the best methods out there to handle carcass material.”

He certainly doesn’t need to tell Harry Sloot that. Sloot is a hog farmer on 370 tillable acres. Like many farmers, he has been composting deadstock for years.

“Our death loss runs about three percent,” Sloot says of a normal year, which is about 270 animals. “We’ve been composting our dead even before it was a recognized option. We’ve been operating this site as a hog farm for 50 years, and we’ve done composting of our deads right from the beginning.”

Sloot explains that his father had horses as a hobby, and he feels horse manure is one of the best sources for composting because it provides both the carbon and nitrogen needed. He adds that composting improves the site’s biosecurity by keeping rendering trucks or other deadstock pickup services off the land.

“It’s just a much better, environmentally sound way to dispose of deads,” Sloot notes. “We, of course, use all of our manure and compost as a nutrient source, which becomes something we can recycle and reuse.”

It’s something many farmers are familiar with, but it does take some effort to get the ratios right – especially when dealing with mass disposals.

“Mortality composting is different from regular composting, in that you don’t mix it as much,” Wilson says. “If you have a regular [composting] system going that you mix or move every one or two weeks, then you throw livestock in there, you’re going to disrupt that.”

Deadstock composting piles need to be considered as longer-term compost.

“You have the base that’s usually two feet tall, and that’s where the animals are laid, and then you have a cap over them, and that should be at least two feet as well,” she explains. “If you’ve got compost already, that’s great. It’s got that starter microbiome and that gets it started as quickly as possible.”

For livestock farmers who have to euthanize, composting can be a viable option, but only if there is enough land space that isn’t being used. There must also be a ready supply of water as well as carbon matter.

Sloot explains his compost pile is on a floating concrete slab about 80 feet by 60 feet. He began composting under a roof, but found that the lack of rainfall on it meant the pile was drying out and needed to be checked and watered on a more regular basis. Wilson notes that moisture levels should be about 50 percent.

Crusan says composting is an option that farmers can manage on their own site with resources they already have. But he says that composting large volumes can be labor-intensive in terms of preparation and must be planned. In Minnesota, a carcass has to be properly disposed of within 72 hours of death. Different regions will have different requirements, with some requiring disposal in as little as 24 hours – which can make the job of composting that much harder. However, it’s relatively easy and the benefits remain: no need to transport deadstock, no excavation, no additional payments to third parties and a beneficial outcome to the land.

“It’s not as intimidating or difficult as it sounds as long as you work with the right experts and have the right resources to work through the process,” Crusan says. “That’s why the experts are there, to help with the right [ratios].”

There are also nutrient runoff risks to be considered, so carbon and nitrogen ratios must be assessed along with proximity to water courses and water tables. Odor can be a factor, but Wilson says proper capping (coverage with carbon matter) will help to control it. When a site is prepared correctly, with enough organic matter, moisture, nitrogen and time, there should be minimal issues and minimal human time requirements once the compost pile is set.

Wilson outlines that after the initial construction, there should be two heating and cooling cycles. The temperature of the pile must hit and maintain 130 F for seven to 10 days, then return to ambient temperatures. After the primary stage, mixing should occur, then the same temperature and time elements will define the secondary stage, after which mixing can occur again. Allow for curing and storage time before applying to fields to prevent damage to crops. A sow of about 500 pounds will take about 60 to 120 days for the primary stage, 40 days for the secondary stage and 30 days for curing.

Opening a carcass can speed the process and, in some cases, a wood chipper can be used to break up deadstock and increase the speed of composting.

“It’s a way to at least recoup some of the nutrients that were fed to the animals. Life continues,” Wilson says.

Sloot was one of the lucky ones during COVID-19. His daughter created a webpage to sell the hogs after the family managed to find a small slaughter plant that would take a few hogs at a time. They sold 1,300 head in five days and at this time have not had to euthanize and dispose of any animals.

Each state and province (and sometimes district or municipality) has its own regulations in terms of managing deadstock. For example, Minnesota allows up to 72 hours post-death to begin composting, but other regions allow only 24 or 48 hours. It’s important to learn about the requirements in a region before euthanizing.

The Ontario Ministry of Agriculture, Food and Rural Affairs has compiled a list of disposal option resources, including composting legislations and guidelines. Visit the link at omafra.gov.ca/English/livestock/deadstock/facts/other_jur.htm. Here are a few additional resources:

If you aren’t sure where to start, contact a trusted veterinarian, local animal control authorities or environmental protection resources.