Many people take management of horse manure for granted – until there’s a problem with water quality or neighbor complaints. 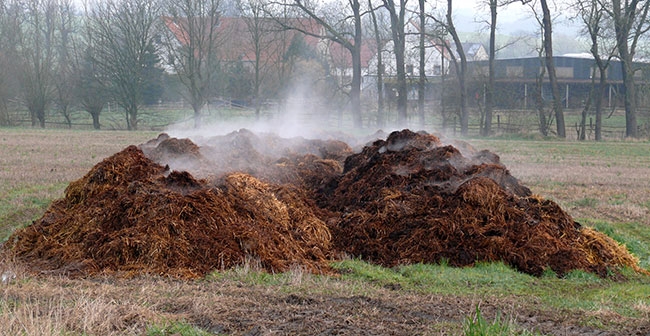 People today just don’t know how to manage horse manure. They can haul it to landfill sites or they can get it back out to the farm where it can do some good. It is a good product and full of nitrogen, potassium and phosphorus. Photo: Dreamstime

“That is until somebody makes a mistake and pollutes someone else’s water, or they offend their neighbors with flies or odor,” he says. “That’s when the neighbor calls up the water conservation district and says, ‘Hey, this guy is piling manure up and he isn’t doing anything with it.’ Most of the cases in our county, where the guys (inspectors) have been called out, have not been on dairy farms or livestock farms, they’ve been on horse farms.”

Ober’s county, just east of Cleveland, has the second-highest horse population in Ohio, and he has worked extensively with equine professionals. His clients generally have small farms, small lots, with a relatively small number of animals. He advises them on hay quality, pasture management, and manure and nutrient management.

In his work, he has found that there are some common problems in the industry.

“When I talk to horse owners, of course the first thing they’re looking at is a nice new arena, or increasing the number of stalls. But what are you going to do with the manure?” he asks. “You have to think of that problem before you move ahead or move horses into the stalls. You can’t just pile it up at the back door and hope it goes away. Manure is a problem, it can offend the neighbors and it can definitely compromise water quality.”

The two areas of environmental concern are the manure produced inside the stable, and also the manure that is produced outside.

“In our area we normally have guys with four or five acres trying to keep six horses. That’s bad business, you can’t do that, especially if you’ve got a boarding stable. You’ve got to turn them out year round. What are you going to do with those horses when you turn them out? If you’re lucky the ground will be frozen but most often it’s just covered with snow and you’re going to turn it into a quagmire.”

“Here’s two things you have to look at; first, the manure inside the stable. What are you going to do with that?” he asks.

Of the manure produced outside, “what about the water quality issues outside that barn?”

“The first thing we’re going to look at is grazing, which is the traditional pastime of horses. They are just like sheep. They will graze right to the ground. Eventually, they will graze it down till everything is gone and then they will go after the grass under the fences. That is when you know you have hungry horses,” he says.

“One thing you have to understand about horses is that they are pretty much like a conveyor belt – food goes in, poop comes out and it’s continuous. Horses graze 22 hours out of 24.”

Artificial measures can be taken to protect pastures from excessive erosion due to weather, grazing or turnout.

“It is part of the real solution to all weather turnout. This has been a real boon for the horse industry, it’s not cheap but it is definitely part of the solution,” Ober says.

He explains that they take a pasture area that has been cordoned off and make sure it drains well, tiling it as needed. Then they bring in geodesic cloth and put it down as a ground cover to provide some support and so gravel is not lost. Then they cover it, first with a very coarse limestone, working up to a very fine limestone cover.

“This creates a pad that the horses follow and that solves the turnout problem,” he says. “They don’t need to be out on pastures in the middle of December punching the pasture up, then there’s a good rain and all the manure and soil that’s out there washes into the creek. That’s a problem you’ll have to deal with.”

The choice of bedding can be another issue.

“The big problem is that the majority of that bedding that is choosen is sawdust and wood chips,” he says. “It takes too long to break down, so you’ll need more microbial activity and that will suck up all the available nitrogen in the soil to break down the carbon in the shavings and bedding and you’ll have stunted grass.”

Ober notes that nitrogen ratios for wood chips, sawdust bedding are 200 to 750 to one.

“You need to source the right bedding; straw is about $4 per bale, shavings $4 to $8. Overall cost is going to be about $45 to $46 for straw and $35 to $40 for wood shavings. Another factor to consider is that cleaning sawdust and wood shavings out of a stall is labor intensive and expensive.”

Ober points to an OSU fact sheet on nitrogen enhancement and says that if you are going to haul manure on a daily basis, you will want to add about a half cup of ammonium sulfate into your wheelbarrow load.

“This should give you enough nitrogen to start that break down process,” he says. “I would like to see maybe half to a full cup added, and I will tell you that it does work very, very well.”

Another option that people have used is the dumpster.

“This is a popular way because people today just don’t know how to get rid of horse manure. In one situation there is one dumpster for six horses that is picked up and emptied every three weeks. That works out to about $3,000 per year. If you are boarding horses, you have to consider the $250 to $300 a month for manure. That’s a major cost.

“Many farmers are using this system simply because their backs are against the wall,” Ober says. “You will save money during the summer months (when turned out) as opposed to winter but this is still not a good system for dealing with manure.”

Composting is another solid option for manure.

“We don’t see it used that much but there are definite advantages,” he says.

Make a pile about three feet high and seven feet wide, and aim for the optimal temperature of 160 degrees Fahrenheit.

“We want to maintain the moisture so that when you grab that material you feel the moisture. Too much water kills the bacterial action. You need to keep rotating the pile and aerating it. You will end up with a product that is very, very good and you’ll be able to save most of the nitrogen. If you bring it into a nitrate form it will not leave the ground as fast. This is another sound management tool.”

Ober explains that the reason composting is not yet popular in the horse industry is due to the carbon to nitrogen ratio.

“If you can get ahold of some other materials to get in there, some green materials, some other animal material, source all the green clippings or straw then bring it all together and bring it into a compost pile,” he says.

When it is done, the compost has been through a complete cycle and the product is very good and can be used in landscaping and throughout parks.

“The process kills pathogens, flies and bacteria,” Ober explains. “The difficulty is the high carbon to nitrogen ratios, and if you use just saw dust it could take up to two to three years to get that pile of compost down just right.

“We’re talking about horse manure. And, we can haul it to landfill sites or we can get it back out to the farm where it can do some good. It is a good product and full of nitrogen, potassium and phosphorus.”

The first thing you have to do if spreading horse manure on the field is to take a soil test.