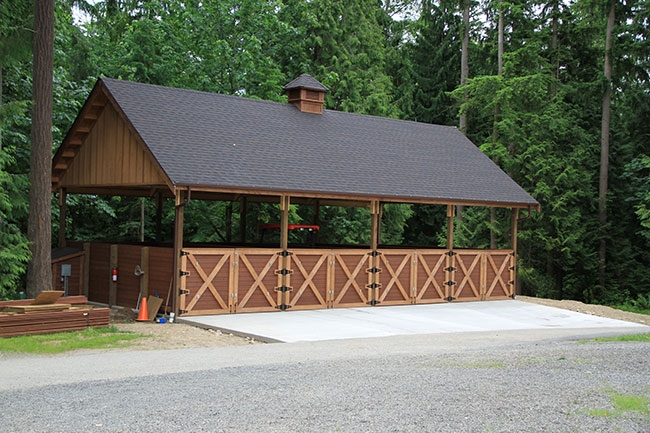 These technologies can cover a range of innovations – generate energy from animal manure, reduce on-farm waste streams, and repurpose manure by creating marketable fertilizer and other value added products such as compost.

In October, MDA awarded Veteran Compost of Harford County, Maryland, and O2Compost of Washington State a grant for $350,300 to develop a compost demonstration project plus a public education and training facility in Anne Arundel County for livestock farmers.

All three compost systems will be solar powered to demonstrate off-grid sustainability. The medium and large systems will include storage tanks to retain roof water for use in the composting process.

The project will also include formal classes and hands-on workshops, public tours for students in kindergarten through college, and alliances with government agencies and non-profit environmental organizations. In addition, a compost cooperative website will be developed to bring together producers and end users of the finished compost products.

The compost systems that are displayed will be ones that have been in use since 2001. Peter Moon, owner of O2Compost, says he started out in the composting industry in 1989, designing and permitting large-scale municipal green waste systems. Then, in the mid-1990s, he started applying some of the industrial ideas to compost dairy and chicken manure.

After seeing a chicken farm that was composting mortalities that looked tidy but suffered from terrible odor issues, he decided that an aerated bin system was what was needed. It took him a few months to figure out the answer and was convinced that it would work.

“I ended up building a prototype in my back yard because I had to prove to myself that it would work, and it worked way better than I had hoped,” he says.

Today, O2Compost offers what they call Compost Operator Training Programs. They include four basic components – the design of the system, the aeration equipment package, a detailed training manual written in layman’s terms, and unlimited technical support – for a fixed fee.

“It’s this system and three stages of bins that will be on display,” he says. “Although I don’t know of any other company that is offering anything like it, I want to make clear I didn’t invent the concept of aerated composting. Aerated static pile (ASP) composting was first developed in the mid-1970s in Beltsville, Maryland. I just reconfigured it into an aerated bin system.”

When the MDA put out the RFP in 2016, Peter immediately thought of his client and good friend, Justen Garrity, owner of Veteran Company based out of Aberdeen, Maryland. The two had known and worked with each other since 2010 when Justen took Peter’s training program.

Peter approached Justen and suggested that, since the company was located in Maryland, why didn’t they set up a demonstration site with bins and a larger open aerated static pile system and use it to instruct farmers in Maryland and neighboring states. They could come to them, participate in a half-day workshop and then come out to the site and see it, sense it, understand it and learn.

Justen could immediately see the value in this partnership, and so did MDA. In 2016, O2Compost and Veteran Compost received the grant.

The project would already be operational today, except for one snag. Justen and Peter had challenges finding a good site, because people in the area have been reluctant to have a composting site near them because of potential odor issues. This is despite the fact that Justen’s composting facility in Aberdeen has received zero odor complaints from neighbors in the six years that it’s been operating.

“Justen has also had to go through a process with Anne Arundel County to allow for composting on agricultural zone property,” says Peter.

It has taken a long time and numerous public hearings, but recently the county commissioners voted unanimously to allow this activity on agricultural zoned land.

Ironically, these systems will demonstrate why compost doesn’t have to generate offensive odors for several reasons: the ASP compost piles are not turned; airflow is induced into the piles resulting in aerobic conditions throughout the pile; and a biofilter cover is used for in-situ treatment of off-gases.

“It has been my experience that most people think that compost piles need to be turned to get oxygen into it,” says Peter. “What they don’t understand is that when a biologically active pile is turned, the oxygen that is introduced into the compost is then consumed by the microorganisms and depleted within 30 to 45 minutes.”

With regard to composting at the training facility, Peter and Justen will induce airflow using a high pressure, high volume electric blower and push air into the pile to replenish the oxygen and displace CO2, heat and water out of the pile.

Drainage isn’t a factor for the smaller systems because the bins are covered with roof structures. However, for municipal scale compost facilities managing storm water, it is always an important consideration.

“For the larger systems, municipal-type scale, yes, typically we’ll construct a pond of some kind to handle any surface water run-off.”

The liquid collected is then re-introduce back into the compost pile as process water, or in some cases directed to a sanitary sewer for processing at the local wastewater treatment plant.

“Our goal with composting is to get the pile temperature throughout the pile to exceed 55o C (equivalent to 131o F) for a minimum of three days. Meeting these time-temperature conditions effectively destroys pathogens, parasites and weed seeds in the finished compost,” says Peter.

The objective is to produce a high quality compost product that is safe to use on pastures or in vegetable and landscape gardens.

Moisture is always an important factor when composting, and will be one of the things farmers will learn more about at the site. 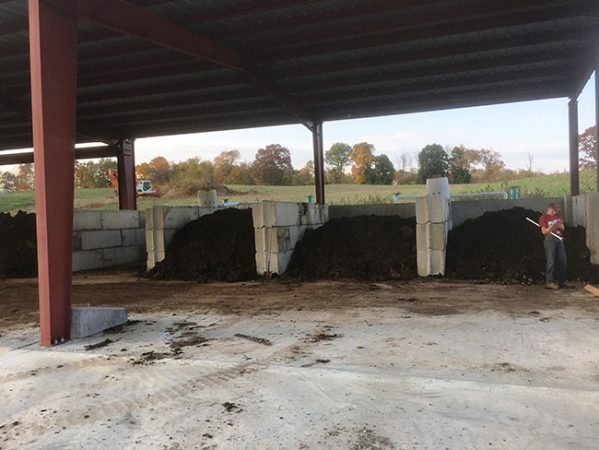 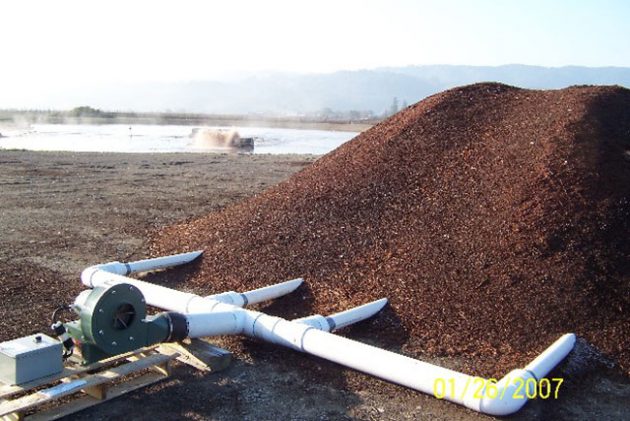 Peter says with dairy and pig manure, even if it’s run through a separator and the fibrous material is stacked, the base can get saturated because the water just continues to drain out. It can fill the pipes under the stack with water. To avoid this, some type of dry “bulking” material can be added. Peter often encourages dairies to look to horse stables in their area or even equine events.

“Horse farms always have that same problem, but it tends to be very carbon rich and very dry, which is exactly what you want to marry-up with wet substrates.”

Flexibility is built into the system

“For example, companies may accumulate their food waste in batches and then mix it up to compost out. Or you can build a pile over a 30-day period as you would on a horse farm,” says Peter. “The idea with the MDA grant is to teach people what is possible, and that there is a method that’s simple and effective and an excellent investment on their farm with an ROI of two to five years.”

There is also flexibility in the use of pipes. With small, aerated bin systems, the air is delivered by an air-floor and there are no pipes to work around.

For larger systems, aeration pipes can be laid directly on the ground with the pile constructed directly on top. Some farms sacrifice the pipe when they bring in their frontend loaders. Others choose a thick-walled HDPE pipe.

“That pipe can literally be pulled out from underneath the pile and reused.”

One of the key features of the system is low maintenance. Once the compost pile has been built, it’s pretty much hands off. The blower and timer to do all of the work.

“You monitor the composting process, but you don’t need the big windrow turner and someone out there driving it,” says Peter. “You’re not paying for fuel, maintenance or repairs and you are able to greatly reduce air emissions. ASP Composting requires about 25 percent of the space when compared to turned windrow composting, and it can be operated at less than 50 percent of the cost.”

Both Peter and Justen feel that once the training facility is in operation, which looks to be late summer of 2017, farmers will be excited to discover that aerated static pile composting yields too many benefits to ignore. It speeds up the process, reduces odors and basically eliminates neighbor issues. It also destroys parasites, pathogens and weed seeds in the mix, has a small footprint, reduces the cost of operation, can handle any organic waste material and is simple to operate.

“The question I get a lot is, ‘If this is all so easy and it’s everything you say it is, why isn’t everybody already doing it?’” asks Peter. “For some reason everybody is just locked onto the idea you need to turn the pile, but you don’t. We have over 1,200 systems in operation in 21 countries. It is a simple technology that is easy to learn – and it works.”