The Smotherman family works diligently to ensure that the manure generated from their turkey operation in Texas has minimal impact on their surroundings. 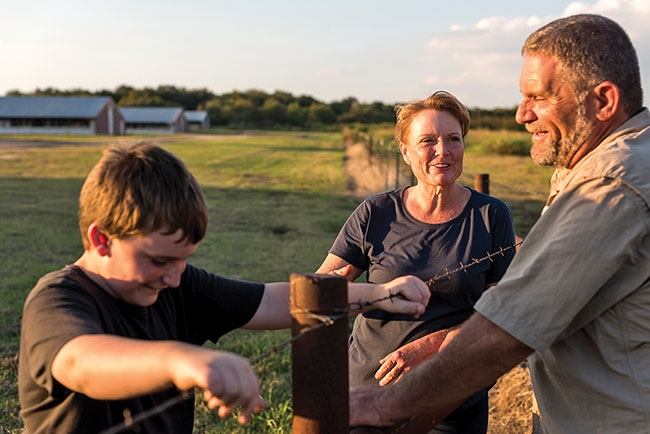 The Smotherman family produces approximately 750,000 or eight million pounds of turkey annually on their operation outside of Waco, Texas.

The Smotherman family began farming in 2002 as admitted rookies to agriculture and raising turkeys. But 16 years later Texas-based Ken and Dana Smotherman, may now be considered industry veterans who are having hall of fame careers, according to their peers.

Many elite athletes say that the biggest challenge isn’t winning something once. It’s doing it a second time. That’s exactly what the Smothermans have done. They have been nominated twice by the U.S. Poultry & Egg Association for the Family Farm Environmental Excellence Program in two different decades for two different farms.

The Smothermans raise Honeysuckle White turkeys on contract for Cargill and work to minimize their environmental impact, maintain and enhance their natural environment, while encouraging the growth of prime wildlife habitat. Many of their barns are surrounded by forested land consisting of mature oak trees, which  are harvested on a sustainable basis to ensure that the forest stays intact.

To earn the recognition of the Family Farm Environmental Excellence Program, a farm must also demonstrate industry leadership, and that is exactly what Ken Smotherman has done – parlaying his information management skills to develop a computer application to record and maintain manure and application records to support the farm’s Water Quality Management Plan (WQMP) with the Texas State Soil and Water Conservation Board.

Classified as a confined animal feeding operation (CAFO) by the Environmental Protection Agency (EPA), the Smotherman operation is not only permitted through an obligation agreement with the Texas State Soil and Water Conservation Board, but also the Texas Commission on Water Quality and the EPA.

“With the ever-increasing regulatory requirements, it isn’t enough to just comply with government regulations,” Ken says. “It’s become very important that our industry maintain records that clearly record our compliance with those regulations and provide a traceable disposal record of our biowaste.”

Within his data management application, records are entered for each production flock that reconciles the tonnage and type of poultry waste removed from each operation by identifying the on-farm source, waste type, and person or company that received the waste. Each record contains the date removed and flock number that generated it, along with contact information on the individual or permitted company that assumed responsibility.

Additionally, when samples are submitted to laboratory for analysis, the resulting reports may be embedded within the database and attached and linked to the sample record from where it was taken. This allows sample analysis reports to be retrieved quickly when required by governing authorities during auditing.

“The system facilitates our annual auditing process and is compliant with regulatory requirements for keeping and maintaining waste records,” Ken says.

Just like their participation in a Cargill program, which tracks individual turkeys from their farm to the consumer’s plate, it’s obvious that the Smothermans take tracking the final destination of their waste products just as seriously.

“It has always been our dedication to wisely utilize our natural resources to produce the highest quality turkeys possible,” Ken says. “To us, this means applying natural resources in a responsible manner, preventing unnecessary waste and favoring the use of sustainable resources wherever possible.”

Ken adds that these days being a successful farmer and an environmental steward should go hand in hand, because farmers that ignore the impact that they may be having on their surroundings may soon find themselves out of business.

A family affair
As general manager, Ken manages the grow out facilities and looks after cattle and hay production. In addition to turkeys, they also have a 125-head cow/calf operation. Dana, fondly known as the ‘turkey momma’, looks after turkey brooding operations. Their 11-year-old son, Beau, is also eager to help.

Their farms are located about 20 kilometers (14 miles) outside of Waco, Tex. producing about 750,000 birds or eight million pounds of turkey annually, raised from chicks to market-ready hens.

According to Ken, raising turkeys is a fairly big agricultural sector in that part of Texas, with about 40 barns growing turkeys on contract for Cargill. The chicken production industry, however, has a much larger presence. To this day, both he and Dana consider themselves very fortunate to be in the business they are in, but it wasn’t always their chosen career path.

The Smotherman family produces approximately 750,000 or eight million pounds of turkey annually on their operation outside of Waco, Texas.

They were raised in the Waco area, but took a circuitous route back home and to turkey farming. Prior to this endeavor, they and their family called Phoenix, Ariz. home. Ken was working as an information management consultant and Dana was working as a registered nurse.

While visiting home one Christmas, Ken ended up chauffeuring around a friend of his parents who had been injured in an accident and had mobility issues. He owned five turkey barns. It was during that time that he and Dana discovered that they might also have a future in raising turkeys. It would provide them with the opportunity to return home and work from home. Both were tired of commuting back and forth to work.

In 2002, in partnership with Ken’s father, Ken Sr., they established a brood farm with separate finishing houses located on adjacent tracts of land totaling about 60 hectares (148 acres). It consisted of the Sedberry Farm, with two 500 foot by 50 foot brood barns, and the nearby Sulak Farm, consisting of four, 600 foot by 50 foot grow out barns.

In 2013, Ken and Dana became full owners of the business and in 2016 acquired a new farm that they were leasing from Cargill. Renamed the Woape Farm, meaning, ‘a place of hope’ among the local Caddo-Pawnee natives, it is located about 12 kilometres (eight miles) from the other farms. Originally a grow-only farm, the Smothermans made an investment to convert it into a whole lifecycle farm. It has 120,000-square feet of barn space. Each barn has 12,000-square feet of brooding that opens up into 30,000-square feet for finishing.

The litter management approach on their turkey farms is to de-cake between each flock, which is a process of removing the top layer of manure-laden litter, removing approximately 450-cubic yards of material per flock. Each barn is completely cleaned out at the end of the tenth flock. This yields 4,500-yards of de-cake material and about 5,000-cubic yards of clean-out material. The litter is a mixture of wood chips and poultry manure and after each de-cake removal or complete removal, there is a fresh layer of wood chips applied in the barn.

Smotherman Farms has a barter or trade agreement with a local rancher to handle and spread the de-cake litter, where the turkey operation provides him with organic nutrients in exchange for baling the hay for their cattle. Ken says that having this relationship is a hugely important part of their business, although he believes that it wouldn’t be too hard to find other markets for the poultry litter. There is big demand for it as an alternative to commercial fertilizer.

The local rancher is David Ballew, who operates over 400 hectares (1000 acres) of grazing land, hay production and small grain production. He applies the de-cake litter primarily to his irrigated pastures where he produces three to four cutting each year of improved coastal Bermuda grasses.

“David and I closely monitor the application of the litter through soil sampling and testing,” Ken says. There is a concern in the area about phosphorus build up in the soils. However, the Ballew lands seem to absorb wherever nutrients are in the Smotherman de-cake material well. Testing shows that the soil type on the Ballew property, which Ken describes as ‘sugar sands’, does a good job of absorbing the de-cake material and contributing to hay production without overloading the soil with phosphorus. But, they keep close tabs on application rates and location.

Every two years, each barn is completely cleaned out. The manure-laden litter is removed and sold to a company called Dr. Gobbler Inc., with between 80 and 120 truckloads removed from each barn. Dr. Gobbler, with a location in Waco, is a third-party vendor of Cargill, and is permitted by the Texas Commission on Environmental Quality to store and process biowaste from the turkey production industry. Ken says that the material is typically composted and sold commercially as an organic fertilizer or soil amendment.

The Smothermans have gained an appreciation for the role that farmers play in feeding, clothing, and even fueling humanity, and the need to maintain a healthy environment to support these activities. Whether it is row crop, meat protein or biofuel, they say that the farmer must be the best steward and guardian of the Earth’s  natural resources. It’s the farmer that truly understands that resources can be used in a responsible manner that does not deplete, but sustains.

“We, mankind, can’t run to Jupiter to grab a bag of potting soil. So we’d better care for the resources we have,” Ken adds.

Related
Are Pennsylvania poultry farms affecting the Chesapeake Bay Watershed?
Preventing phosphorus buildup in soils from turkey manure
Side dressing growing crops with liquid manure
Not all poultry litter is the same
Tags