A new model looks at maximizing profitability and technology adoption of anaerobic digesters. 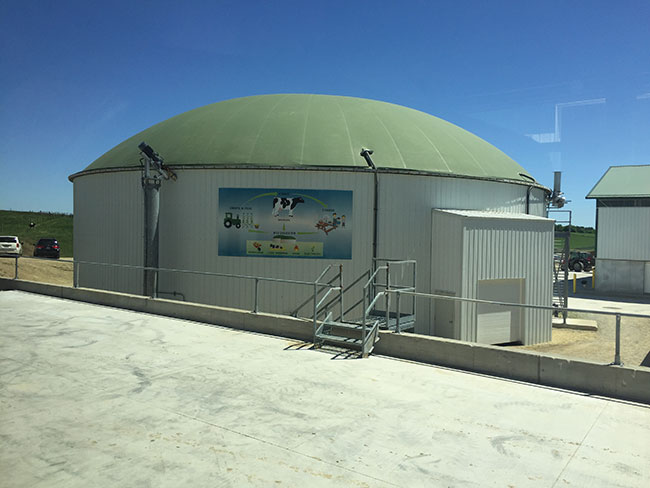 Anaerobic digestion systems provide an alternative for manure management that can reduce greenhouse gas (GHG) emissions and produce renewable energy. However, economic and technical considerations are challenges to adoption of these systems. Researchers at North Carolina State University and the University of Wisconsin have developed a planning methodology and computer model to help show farmers and investors how to make on-farm sustainable energy projects more sustainable and maximize economic returns.

“We were approached to review proposals for nutrient concentration and energy generation facility concepts, including a series of centralized facilities, each a hub with contributing spokes. We reviewed the proposals to assess engineering assumptions and process economics, optimal size of cluster, and other factors. We observed the use of rules of thumb to determine maximum shipping distances of manure before it becomes uneconomical, which is a source of uncertainty.”

To assist with planning and assessment, researchers developed a computational model that tells users how to maximize the economic return on anaerobic digestion (AD) systems. The model helps identify optimal location, system capacity and geographic area recommended for the renewable energy projects. It can also generate reliable estimates for capital budgets and more accurately predict profitability of systems. It improves on earlier efforts by using advanced computational techniques to address uncertainty.

“Along with various known factors, such as which species a farm is raising and the size [and location] of each farm, the model also addresses different sources of uncertainty that affect the profitability of an anaerobic digester,” Sharara explains. “There are several assumptions on engineering design and efficiency and other technical and economic variables that impact the various scenarios for best value, worst value and something in the middle.

“To get the odds, it is much easier to roll a dice with two outcomes, but it is much more difficult when there is a wider range of variables. Not all of the parameters or variables move in the same direction. With access to sophisticated computing, mathematical algorithms and modelling, we can essentially simulate rolling a dice for every variable to assess profitability, using a probabilistic approach to overcome uncertainty regarding project parameters, such as manure biomethane potential, project capital, and electricity sale price.”

Although some variables, such as future sale price of electricity or digester efficiency, are uncertain, a price range or performance range can be used in the optimization rather than one single value (eg. digester efficiency range of 75 to 91 percent). The researchers designed the model to run repeated simulations that account for variation in each area of uncertainty, and tell users which combination of factors would generate the most profit.

The optimization model ran 1,000 evaluations for each study area, resulting in different probabilities for each region. The most critical parameters driving the model turned out to be biomethane potential and the electricity sale price. The herd size on the host farm was an important factor in determining the feasibility of digestion projects. Geographic distribution and sizes of dairy farms played a critical role in optimizing profitability and technology adoption for ADs in both regions. For both case studies evaluated, optimizing the objectives favored development of collaborative AD systems.

“By running the model with the two different regions side-by-side, we could compare the impact of size of farm and distances between them on profitability,” Sharara says. “Then for the ones that yielded a profitable design, we could go into more detail of all the parameters of the system and do a series of optimization for profitable outcomes.

“The model allows for adjusting and building in tradeoffs between system size and costs of production and finding the systems with the larger probability of profitability. For example, some farms showed up more frequently than others in the optimal solution,” Sharara explains. “Similarly, certain farms were identified as necessary for a central digester to have enough critical capacity. Compressing all of the optimizing results into one probability map can communicate the variability or the ordering of how the cluster would look in this region or how it could be dissected into certain hubs and spokes to farmers, investors and planning agencies.”

Two goals were evaluated by optimizing the economic and technical performance parameters of the system: optimizing a system for maximizing profitability, and maximizing the adoption of the technology – provided the project doesn’t lose money. In some situations, collaborators may be willing to go ahead with the investment to get a system established and sacrifice profitability for a net-zero, but no loss. This can change the decisions, for example; if profit is the priority, the probability map will identify one or two systems for a particular area. However, widening the circle may allow for building a different-sized cluster or reconfiguring the cluster by adding more hubs and spokes, but with declining profitability.

“We have published the study results and presented the results at several meetings,” he adds. “Initially it is myself and students that have the capacity and training to run the model. One critical piece is computing capacity and the reliance on optimization computing engines, but we are working with colleagues on finding an open-access, open-source engine and infrastructure that could host and run the model. I am working with graduate students to extend the model, including the ability to include multiple livestock species, integrating other sources of organic feedstock and accommodating end products.”

The second stage of the work will raise awareness for practitioners and agencies. To ensure the robustness of the model, Sharara is looking for input to make sure the assumptions and numbers are as up-to-date as possible, including equipment costs and other variables.

“We want to make sure people working in planning or funding projects are aware of this sophisticated tool that can provide interesting insights beyond just a go or no-go profitability decision. The model can rank projects, test differences in areas and compare different pricing scenarios and capital budget options, for example. For those that don’t want to write their own code, we can input data specific to a region or state, or a group of counties or provinces, to provide customized, detailed economic and technical performance parameters of a system for assessing profitability and technology adoption.”

With the planning methodology and model in place, Sharara is working on integrating other prior research components into the system. “There are several other separate pieces published earlier, such as processing nutrients and pelleting, that will be a good fit with the model, and my goal is to bring all of these pieces together,” Sharara says. “Although modelling becomes more challenging in terms of computational overhead as you add more components, the results provide far more answers and information for developing capital budgets and making economic and profitability decisions. We continue to work with [those] who are interested in using the model to assist with project planning and new capital investments for anaerobic digestion systems.” •