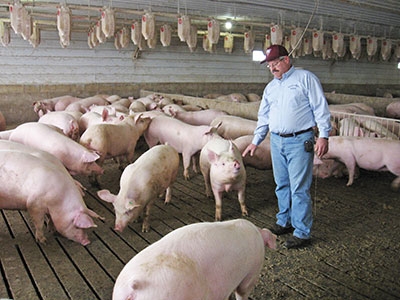 The hog business operated by Shoup Brothers Farm Ltd. in Ohio has proven that sometimes following the wisdom of our forefathers delivers better results than following the crowd. That is reflected in the way the operation has developed a network of production centres and rotates its manure applications.

The sixth-generation, nine-family business is a farrow-to-finish operation located about one hour south of Cleveland. They raise about 3,200 sows and 70,000 hogs annually, which altogether generate about 15 million gallons of manure. Shoup Brothers Farm is among a handful of hog producers in an area dominated by dairy farms, where about 80 percent of their production is their own finishers while they contract finish about 20 percent of their herd for families in surrounding counties.

Unlike many other hog operations that are moving toward larger, centralized production centres, Shoup Brothers Farm continues to follow the same pattern established by the farm’s founders, William and Robert Shoup, which was to operate smaller production barns over a larger area so that each operation has a lesser impact on the local environment, such as when land applying the manure generated by each farm.

“Instead of continuing to build barns in one location, we’ve moved as far as a half hour or 45 minutes away to buy additional farms and build finisher barns there,” says one of the farm’s current partners and a licensed veterinarian, Dave Shoup. “My dad and my uncle had that wisdom years ago to stay spread out because they could see what was coming down the pipe as far as trying to manage these nutrients.”

Also, many large hog farms these days tend to rely on the same cropland every year to dispose of their manure, but the Shoup Brothers Farm only applies manure on the same cropland every two to three years, governed largely by soil tests conducted in advance of manure application, which helps to avoid overloading the soil with such problematic nutrients as phosphorus.

Other than one farm, which was already experiencing phosphorus issues because it previously operated as a poultry farm prior to the Shoups purchasing it, “we really don’t have any place else where we are in trouble phosphorus-wise,” says Dave. “We pick and choose based on soil tests.”

They also add a product called Phytase to their feed in their nursery barns, which reduces the amount of phosphorus accumulated in their liquid manure.

In addition to raising hogs, the farm also grows about 2,500 acres of corn, soybean and wheat, mostly used as feed in the hog operation and one family member also raises about 200 Holstein steers.

Where and how much liquid manure is applied to each farm has a lot to do with their nutrient management plan and what crops they plan to grow on each parcel of land.

“That may sound high for people who probably do 3,000 to 4,000 gallons per acre, but we probably hit fields only about once every three years,” Shoup says. “We rotate. We might go into an area and cover 200 to 300 acres and then won’t go back there for three years.” They still do apply some commercial fertilizer on their cropland, but it is reduced substantially on farms where liquid manure has been applied.

Shoup Brothers Farm has had a nutrient management plan for both soil and water on their properties for over a decade, and this has been done on a voluntary basis. That’s because the barns operated by the farm are smaller than 2,500 finishers per barn, which don’t require a state permit.

“We just want to be good environmental stewards by not over applying and it delivers a financial benefit to us also,” says Dave.

The farm has come a long way since Dave’s great-great grandfather originally put down roots in the area over a century ago. Their foray into hogs began with William and Robert starting to farrow sows in straw as far back as the 1940s. They are still involved in financial aspects of the farm, while five of their sons look after day-to-day operations. They are Dave, Ed, Dean, Doug and Don, and each plays a pivotal role in herd and crop management as well as sales and marketing. Several of their wives and children also work in key aspects of the farm or to advance the hog industry as a whole. For example, Doug’s wife, Diane, takes part in the Ohio Pork Producers Council’s Family and Consumer Science Classroom program where she gives pork cooking demonstrations and talks about modern farm practices to students in northeast Ohio.

Dave says the family’s strong Christian values – which includes regular, short-term missionary work to construct buildings, such as schools, in places like Palestine, Haiti, Costa Rica, Nicaragua, Honduras, Thailand, Malaysia and Cambodia – has them develop a strong sense of appreciation for what they have within their business operations and also the need for balance between people’s basic needs and potential environmental impacts.

“It makes us appreciate the blessing that we have as far as available water, the quality of our soils, and the availability of fertilizers, feed hybrids, and everything that it takes to produce the most off an acre of land,” says Shoup. “It makes you appreciate what you have right in your back yard, where we have so many options of what you can do.”

He says a good steward realizes they don’t own the environment, but only manage it in an efficient manner for the greatest possible outcome, with an eye to the future. The Shoup Brothers Farm operation is already witnessing the next generation taking a more active role in day-to-day farm activities.

“Anything we have is not our own,” Dave says. “We are just stewards of it and that goes beyond the land. Hopefully, we each get 80 to 100 years to work with it and then we pass it on to someone else. So we’d like to pass it on better than it was given to us.”

In addition to the practice of decentralizing production centres and rotating manure application, their concern for the environment is also reflected in how carefully they manage runoff to the various waterways that cross their land and in their participation in the Sugarcreek Watershed Partner group, which monitors the aquatic habitat of the streams within the group’s area of interest in partnership with Ohio State University. This includes testing for nutrient runoff. For its part, Shoup Brothers Farm has adopted farming practices such as limited fall tilling and strip-tillage to minimize soil disturbance both for soil conservation and runoff control. They have established 20 to 30-foot wide buffer strips along waterways and have planted grass for runoff control on slopes leading to the watercourses. They also try to avoid applying manure in sensitive areas in the fall.

The family’s concern for the environment is also reflected in their manure application method. All the manure generated by their hog farms is injected into the soil using a drag hose system and not surface applied where there is greater potential for runoff. Custom application using a drag hose set up is handled by custom manure applicator, Carmony Stock Farm. They will set out hose as far as two and a half miles in some cases. The Shoup operation was among the first in their area to adopt manure injection, starting back in 1998, which is a method that not only places the organic nutrients below ground to retain more nitrogen and reduces the potential for runoff, but also contributes to good relations with neighbors by generating minimal odor. Carmony Stock Farm was a hog producer that transitioned to simply crop farming and custom manure application at about the same time that the Shoups adopted the drag hose manure injection method.

Dave says the operation’s main sow herd is within the city limits of Orrville, and borders the community on both the south and southwest side. Thankfully, given their manure application method, he says most of the time area residents don’t even realize they are in the process of applying manure. Also, by using a drag hose instead of tankers for land application, there is less traffic generated on area roads by the hog operation to transport the liquid manure to application sites and less soil compaction compared to the tanker application system used prior to 1998. The decentralized approach also meshes well with the drag hose manure disposal method, as with smaller operations, less cropland is required for manure disposal and a drag hose system can generally reach cropland within a reasonable distance of hog barns just by attaching larger horsepower pumps and laying out more hose.

The application window is also considerably more compressed, as with the old tanker system, Dave says the farms were applying manure almost year round whereas with the combination of deep pit storage systems at each barn plus the drag hose system, an application is completed over just a two to three week period.

The Shoup Brothers Farm was recognized by the Ohio Livestock Coalition (OLC) with an Environmental Stewardship Award in 2013 for their efforts to protect Ohio’s land, air and water quality as well as conserving the state’s natural
resources.