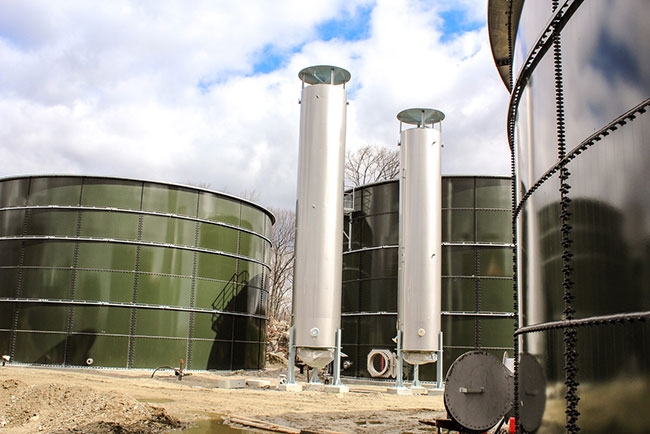 Blue Sphere’s 3.2-MW food waste biogas facility in Johnston, RI, will be connected to the grid in that state by March. Photo by Creative Chica

North Carolina has long been a major pork-producing state, with the industry providing well over 50,000 full-time direct and indirect jobs. However, being the second largest pork-producing state in the U.S. means that North Carolina must contend with mind-bending amounts of swine manure and associated ammonia. The 2.3-plus million pigs housed in more than 2,000 facilities produce so much waste that the state government has mandated the conversion of manure
into energy.

That means biodigesters. But which digester designs might be best to address the situation? Shlomi Palas believes he has found the best technology to handle North Carolina’s serious swine manure problem.

“There have been some biogas plant designs tried by other parties in this state, but we believe we have found the right solution,” says Palas, CEO of Charlotte, NC-based Blue Sphere Corporation.

Blue Sphere has operated for more than two decades and has facilities in several countries, including Italy, the UK, and now Holland and the U.S. The firm oversees entire waste-to-energy facilities, choosing appropriate technologies from well-established contractors and arranging to generate and sell electricity, scrubbed biogas, organic fertilizer, compost and other valuable products.

Electricity production at Blue Sphere’s $20-million, 3.2-MW food waste biogas facility in Johnston, RI, will be connected to the grid in that state by March. Its $27-million, 5.2-MW food waste facility in Charlotte began supplying electricity to Duke Energy in mid-November 2016, with full commissioning and feedstock ramp-up occurring over the next few months.

After almost two years of researching the most suitable technologies for hog manure, Blue Sphere feels it has succeeded in finding the best, most-efficient systems for its two new digester facilities under development in North Carolina.

Palas says they are confident in the chosen vendors for several important reasons.

“The technology providers have long-proven experience and track records of many installations in swine manure processing, and their technologies are working 100 percent,” he reports. “While American hog manure has a little more liquid than European hog manure, the combination of the U.S. and Europe technologies will have the appropriate adaptations to be successful with us here, and the companies involve have also provided us with financial assurances.”

Removal of liquid from the hog manure will be done onsite at individual farms using a combination of technologies. Again, Palas says these sorts of separation system are new to North America, but are working well in Europe and have been successfully tailored for U.S. swine manure.

“Transporting liquid is very costly, so the need to pre-treat on site is critical,” he notes. “We bring the manure dry matter up to 20 to 30 percent and then transport it to the digester.”

Once fully operational, the new NC facilities will produce an annual revenue of about $10 million [estimated] from renewable energy. However, while the biogas from both the Charlotte and Rhode Island projects is being used to generate electricity, Palas foresees a significant shift coming and so the hog manure biogas may be used differently.

“There is a change going on in the gas market, from electricity production to production of bio-methane, compressed natural gas and liquefied biogas for vehicles,” he says. “The engines that use this gas are already well-developed and already many Fortune 500 countries use trucks and cars that run on this fuel.”

Blue Sphere is developing other sites in North Carolina and worldwide, and Palas attributes his firm’s success to many factors, chief among them is an ‘agnosticism’ to digester technologies.

“The biggest mistake that other firms have made, and are still making, is that they get stuck with specific systems,” he explains. “We are open to using tech from Italy, Canada, Germany, China, Japan, United States and other parts of the world to find the best fit for the feedstock we have. We focus on the waste first. We actually have a dedicated staff member to find and keep up with technologies from all over the world. But no matter the technology, the systems must be bankable and well-established so that we can obtain funding and build a project successfully. We cannot work with startup technology.”

“The process begins with permits, site selection, establishing a market for the gas and so on, and that can take over a year,” Palas explains. “Construction can take another 12 to 18 months. We have every intention of being a primary player, but due to the timelines involved, we cannot do it alone, and we are inviting others to get involved in this serious challenge. Hog manure is a huge market.

“We are starting with these two food waste digester projects and will make sure they are running well,” he adds. “Once we have proved our solution is workable, we’ll know we have a winner and then we can go across the country.”

In January, Blue Sphere also held some meetings in Canada, so stay tuned for developments north of the border as well.