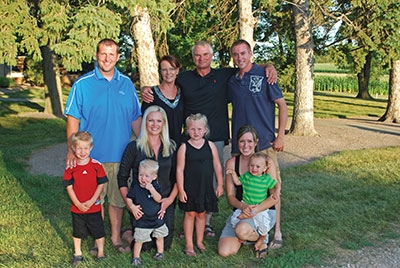 For Dawson, Minn., hog farmers, Wayne and Laura Dahl, good just isn’t good enough. If they can try something new to improve the air quality in their hog barns, benefit the environment, or improve the way they handle their manure, they don’t just talk about it. They do their homework and then implement what’s feasible and proven beneficial.

Wayne grew up on a mixed farm that raised hogs so purchasing his own farm with his new bride, Laura, back in 1977 in Lac Qui Parle County near the South Dakota border wasn’t like an episode of that old TV show, Green Acres – although all the work that Wayne and Laura have done on their property while raising five children has created plenty of green acres.

Today, the farm operates as a contract nursery-to-finishing hog business owned by Wayne and Laura, as well as a corn and soybean crop operation managed by Wayne and his brother, David. They farm a total of about 1,800 acres. Wayne and Laura’s youngest son, Jordan, helps manage the hog operation with the intent that he will take over at some point.
Wayne Dahl Family Farm raises hogs on contract for Mill Farms, which actually owns the hogs. The operation consists of four 1,100-head finishing barns and a 4,400-head nursery. The barns are equipped with slatted floors and eight-foot-deep manure collection pits, which have enough capacity to store a year’s worth of manure. The farm generates about two million gallons of liquid manure annually. The pits are emptied each fall.

The Dahls work with a professional agronomy firm called Anez Consulting Inc. to help them establish the liquid manure application rate for each field, based on nutrient testing of the manure pits and soil testing in the fields.

After their agronomist establishes the application rates, Wayne hires his nephew, Brent Dahl, as a contract manure applicator to land apply the manure using the injection method. Brent’s custom manure applicator unit is equipped with GPS and flow meters so that he can apply the recommended amount per acre as required.

Prior to injection, an agitation pump stirs the pits so that the nutrient content in the liquid manure is balanced once it reaches the field. The agitated manure is pumped into a semi-trailer tanker and trucked to the application site, where it is transferred to one of two field applicator tanks, which have a total hauling capacity of about 10,000 gallons. The manure is then applied below ground into a furrow created by a coulter disk on the manure application drawbar. The manure can be applied anywhere from two to six inches into the soil. Covering disks located behind the application nozzles on the drawbar cover the furrow.

“It takes us about three days to dispose of the manure and we try to do it when the temperature is below 50 degrees to minimize the amount of nitrogen that we lose to the atmosphere,” says Wayne.

Jared Anez, co-owner of Anez Consulting, says given the cost of commercial nitrogen, farmers should do everything possible to save the nitrogen that is in the organic fertilizer, and injection is one way of doing that. Also, with liquid manure injection, they are able to reduce the size of setbacks, so more land is fertilized. Once the Dahls have planted their crops and the corn is six inches tall, Anez Consulting will conduct 12-inch-depth samples to see if more nitrogen is needed. They also conduct cornstalk nitrate testing at the end of the season to evaluate how well the application strategy worked.

In two of its barn manure pits, the farm is testing a product called More Than Manure, which is a product that helps stabilize the nitrogen in the organic fertilizer. It is also an odor control product.

Wayne Dahl Family Farm has evaluated how much financial benefit they gain from using the hog manure as organic fertilizer. The hog manure is lab tested and what they receive is a dollar value on 1,000 gallons based on its nutrient content. The nutrient content does depend on whether the liquid manure is tested from the nursery barn or from the finisher barns.

“For 1,000 gallons of liquid manure from a finisher barn last year, the average cost of an equivalent amount of commercial fertilizer would have been about $48,” says Wayne. “That’s based on getting 75 percent availability of the nutrients within the liquid manure.”

Because the nutrients within the nursery barn manure are weaker, 1,000 gallons from that barn would equate to about $34 in commercial fertilizer.

They apply between 3,000 and 3,500 gallons per acre of finisher barn manure and about 6,000 gallons of nursery barn manure, “and that was costing us about $50 per acre to have that applied,” says Wayne. “So the savings are substantial.”

Because phosphorus builds up in cropland, it is a concern when applying fertilizer. Wayne Dahl Family Farm uses a feed additive called phytase, which reduces the amount of phosphorus in the manure. The benefit is that by reducing phosphorus, the manure application rates can be increased by 20 percent without phosphorus building up in the soil.

“A lot of farmers are really sharp and a lot of times they just need to have peace of mind that they are headed in the right direction,” says Anez. “They need someone like us to bring in some new ideas to the table that are being tried in other areas so that they can implement the best ideas on their farm earlier. This helps them to continue to be profitable and stay on the cutting edge.”

The farm’s manure management method has come a long way since 1977, when Wayne and Laura were basically starting from scratch to establish a hog operation. They started with building a 26 by 90 foot farrowing and nursery barn with a manure scraper system that collected the manure into an enclosed pit next to the barn to complement the existing 20 by 30 foot older, breeding and gestating hog house. They also built a 32 by 132 foot, partial slat floor, finishing barn, which they also used partially for breeding and gestating. It was equipped with a below-ground storage pit. In those days, the manure volume was smaller but because of the limited storage capacity, the hog manure would sometimes be pumped out and broadcast on fields in winter as well as in the fall.

The major investment into current operations started in 2003, when the Dahls successfully negotiated a custom hog nursery-to-finishing contract, which allowed them to arrange for the financing to construct their first large finishing barn. That was when they also started working with Anez Consulting to help them acquire the necessary regulatory permitting.

“When we compare what we did then to what we do now in terms of manure management, it’s almost entirely different,” says Wayne. “The big difference now is that we inject everything, we have flow meters which give us the exact gallons per acre that we want, and it’s GPS controlled. So it’s applied as well as any commercial fertilizer could be.”

Making a substantial investment into raising hogs on contract is only one of several changes that have occurred on the farm since 1977. The farm has also been enrolled in the United States Department of Agriculture Conservation Stewardship Program (CSP) for the past three years, where they are compensated to follow specific guidelines to protect the environment and enhance wildlife habitat in their farm operation.

One of the obvious environmental enhancements they have made on the property itself was to installed grass buffers on both sides of a drainage ditch, which helps to improve water quality. They have also planted native grasses on what once was cropland and new trees for windbreaks, which creates better habitat for wildlife. The farmstead is also teeming with birdhouses. In addition to environmental enhancement and manure management protocols, the CSP includes a crop pest control management component so that action is taken to control pests based on financial thresholds rather than a simple occurrences of the pest. The farm’s manure management method follows CSP recommendations.

“The CSP awards points for following their manure management protocols and eventually once we accumulate a certain number of points, we are financially rewarded for it,” says Wayne.

Furthermore, in the barns, they have installed a technology called electrostatic particulate ionization (EPI), which reduces the amount of dust particles in the air and helps to reduce odor. Wayne says this creates a healthier environment for both the hogs and the workers. It was provided by a company called Baumgartner Environics located in Olivia, Minn.

“It’s great for improving the work environment because they claim that it takes 75 percent of the dust out of the air and I believe them,” says Wayne. “It also takes out odor gases like hydrogen sulfide and ammonia, traps micro-organisms, and kills bacteria.”

The EPI system complements the pit ventilation system that vents the gases produced from the manure pits installed in the barns.

The farm also uses a biological-based pit additive manufactured by a company called Eco-Cure to help reduce odor from their manure pits. Wayne says that claims made by the product manufacturer and how it is applied made sense to him. Also, it was reasonably priced.

“The bacteria supposedly digests some of the organisms that create the gas from the manure, so it lowers the gas level in the barn,” says Wayne. “Now, since we started using the product, the odor seems to be even less than it was.”

The Dahls received a 2012 Pork Industry Environmental Stewards Award from the National Pork Board, given to pork producers who demonstrate a commitment to safeguarding the environment and their local communities.