Manure separation and bio-digestion emerge as some of the best ways to reduce GHG emissions on dairy farms. 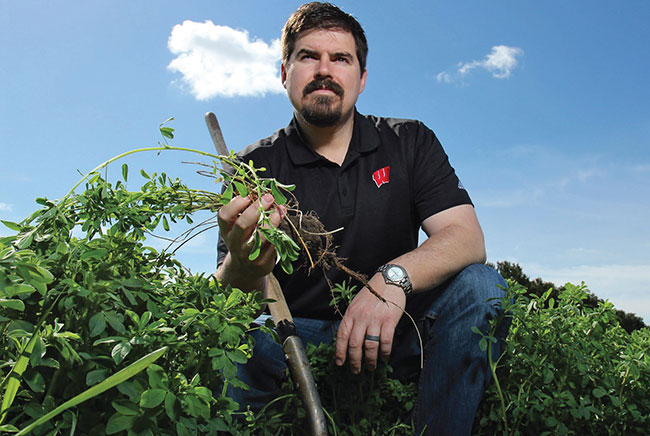 The CAP study presents practices that can be implemented on both smaller and larger dairy farms. Photos courtesy of Matt Ruark.

When it comes to reducing its contribution to greenhouse gas emissions (GHG) emissions, the dairy industry has been headed in the right direction. General advancements in manure management practices, such as separation and bio-digestion, are becoming increasingly common on dairies. The practices have economic benefits alongside the benefit of GHG reduction, making them appealing for producers.

Manure separation into solids and liquids and bio-digestion to treat raw manure prior to lagoon storage or land application significantly reduces the American dairy industry’s production of greenhouse gas emissions.

That is according to the Dairy Coordinated Agricultural Project (CAP), an expansive study funded through a $10-million grant from the United States Department of Agriculture (USDA). The goal of the project was to prepare dairy farmers for the future in a changing climate, with a focus on reducing GHG emissions per gallon of milk produced. The USDA also funded a similar project for beef producers. Dairy CAP wrapped up after six years of research last February and included more than 100 scientists, staff, educators and students from 13 institutions working in partnership.

The Environmental Protection Agency (EPA) reports that there are currently 248 bio-digesters operating on livestock farms in the U.S., with 104 having received USDA financial support. While that may seem like a large number, it is important to note that there are over 8,000 dairies in the state of Wisconsin alone. The EPA estimates that installing bio-digestion is technically feasible on over 8,000 of these dairy and hog operations nationally.

Reducing GHG emissions is a planet-wide focus: GHG emissions contribute to the warming of the planet, which leads to climate change. Agricultural activities involving livestock have been identified as a significant GHG emissions generator. In response in 2009, the American dairy industry set an ambitious goal of reducing its GHG emissions from all milk production activities, including manure management, by 25 percent by 2020. They targeted a 25 percent decrease from 2007-2008 levels.

“This project was done in collaboration with the dairy industry to explore opportunities and tradeoffs to reducing GHG emissions, and as part of the project, we put together a list of beneficial management practices,” says Matt Ruark, project director and soil scientist at the University of Wisconsin-Madison. His co-director on the project was Molly Jahn.

The project spanned six years with the ambitious goal of reducing the dairy industry’s GHG emissions by 25 percent by 2020.

With its focus specifically on milk production in the Great Lakes region, consisting of Wisconsin, New York and Pennsylvania, the CAP study found that the production of large volumes of manure from dairy accounts for 35 percent, or more than a third, of all on-farm GHG emissions. The CAP report states that a dairy cow generates more than 20 gallons of waste per day.

Dr. Ying Wang, vice-president of sustainability research and food systems at The Innovation Center for U.S. Dairy, based in Rosemont, IL, was among the scientists working on the Dairy CAP project. The Innovation Center is where the dairy industry and producers come together to address common goals. One of the Dairy CAP projects completed under Wang’s guidance was a life cycle assessment (LCA) of a gallon of milk to set the record straight on dairy’s environmental footprint.

“This work established a baseline for the U.S. dairy industry from ‘grass to glass’ and confirmed the industry contributes approximately two percent of total U.S. GHG emissions,” Wang says. 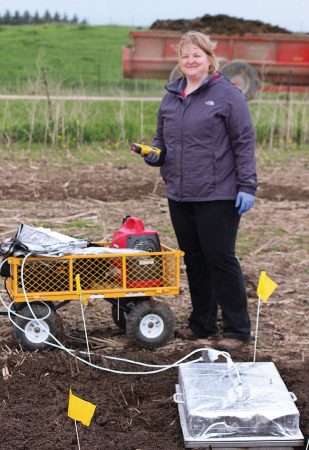 Scientists looked at many on-farm practices and where there was the potential to reduce GHG emissions.

The CAP project presented a number of on-farm activities that help reduce GHG emissions from cow selection and feed ration adjustments, to manure management and crop management. Ruark says that it will be up to the industry as a whole to filter the project’s findings down it its members and encourage greater uptake at the farm level.

Whether the industry will actually achieve its GHG emissions reduction objective by next year is an open question, but CAP researchers concluded that, “Reductions of GHGs are achievable and will lead to economic gains, even in the face of a changing climate.”

The dairy industry is currently conducting surveys to evaluate changes in management practices that have occurred over the past decade to be able to calculate how these changes have translated into GHG emissions reductions.

“The dairy industry has been working to track progress using an intensity metric calculated as GHG emissions per unit of production,” Wang says. “Early insights are that the hard work and implementation of innovative practices by dairy farmers and dairy companies are making a difference.” 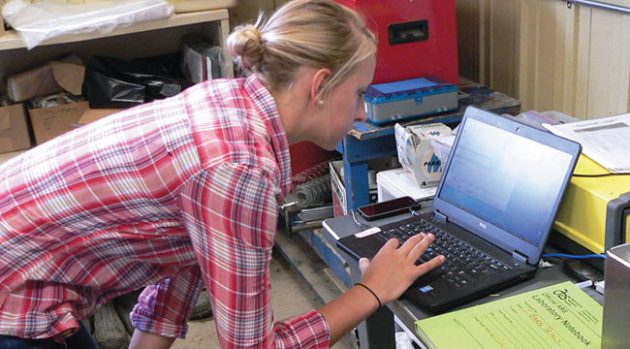 Field and farm data helped to update and improve many of the predictive GHG emissions models that were commonly being used.

It was the CAP project’s goal to present farmers with findings and options that could be incorporated over the normal course of day-to-day farm management. Ruark says that it is all about improving dairy farm management efficiency, because greater efficiency leads to GHG emission reductions.

For example, some dairy farms have already invested significantly into manure separation, composting the solids and then reusing them as bedding. Other options include selling the compost as a commodity or using it as an organic fertilizer on the dairy’s farmland, all of which benefit the farm financially. Separation reduces the nutrient load in the liquid stream, resulting in fewer GHG emissions from open liquid storage lagoons. CAP scientists also found that selection of bedding materials has an impact on GHG emissions.

One of the benefits of bio-digestion of raw manure is the production and capture of methane or biogas, which is a commercial commodity that can be used as a fuel in the production of both power and heat. Ruark says that the cost/benefits of bio-digestion have to be considered on a case-by-case and even state-by-state basis to investigate the upfront costs of installing an on-farm bio-digestion system. Possible state and federal financial support available should also be considered. Then farmers need to consider the potential benefits, if any, of using the biogas to provide heat or electricity that can be used on the farm to offset heat and power bills, or in the case of power production, sold as a commodity to generate income.

While there is a reduction in GHG emissions from bio-digestion, it doesn’t always make financial sense. This option generally works better on larger dairy farms. That is already evident within the industry, particularly on farms where they are constrained by available land and also on where they can apply manure as an organic fertilizer. Because bio-digestion reduces the nutrient load in the liquid stream, more can be applied on land located closer to the dairy, which is a financial benefit and reduces GHG emissions since the effluent is transported over a shorter distance.

“The CAP provides options for farms of all sizes. Digesters are an expensive commitment, but there are other options that can lead to GHG reduction,” Wang says. “There are learnings, such as covering lagoons with a safe flare system that are affordable options for smaller farms.”

Ruark says that reducing GHG emissions without increasing production costs was an important consideration for researchers against the current backdrop of a struggling dairy industry. Given the low milk prices, the goal among researchers was to present options without adding to milk production costs. The resulting beneficial management practices (BMPs) presented by researchers can be implemented on both smaller and larger dairy farms and consider the varying levels of ability out there by dairy businesses.

Outreach and education are an important aspect of the CAP study, so the researchers developed a virtual farm to act as a demonstration farm for the management practices that are available. Through the site, virtualfarm.psu.edu, farmers can access the suggested BMPs and more information on bio-digestion. It visually depicts a typical 150 cow dairy in Wisconsin and a 1,500-cow operation in New York, which are representative of the Great Lakes region. Producers can “visit” the virtual farm and take a closer look at each system through a variety of levels by using their mouse to hover over a farm component, such as manure management. For now, the virtual farm website will be available until the end of 2023 and is being maintained by CAP’s study partner, Pennsylvania State University. 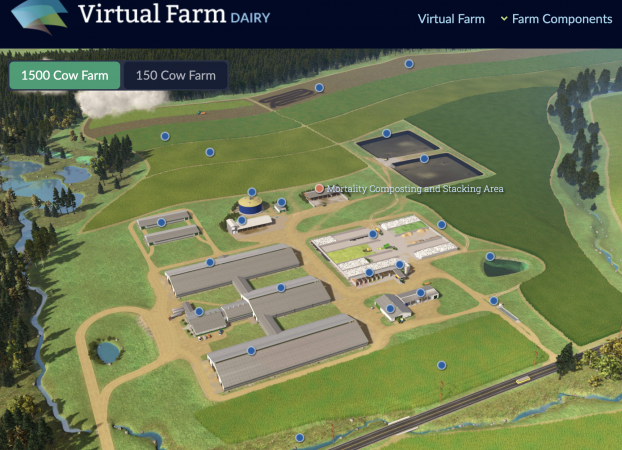 Producers can “visit” the virtual farm and take a closer look at each system through a variety of levels by using their mouse to hover over a farm component.

While raw manure treatment was found to have both financial and environmental benefits, scientists also investigated manure management practices for storage, processing and manure application, using different cropping systems, application rates, and application methods. They discovered that integrating these management practices with a bio-digester could lower the overall GHG emissions of the farm by more than half. Everything made an impact and there were some links discovered back to the feed silo, where feed ration selection on the front end could influence manure management systems and practices later on, leading to a reduction of GHG emissions.

Through the CAP study, field and farm data helped to update and improve many of the predictive GHG emissions models that were commonly being used. The only question that remains is, what will the industry do with it? •