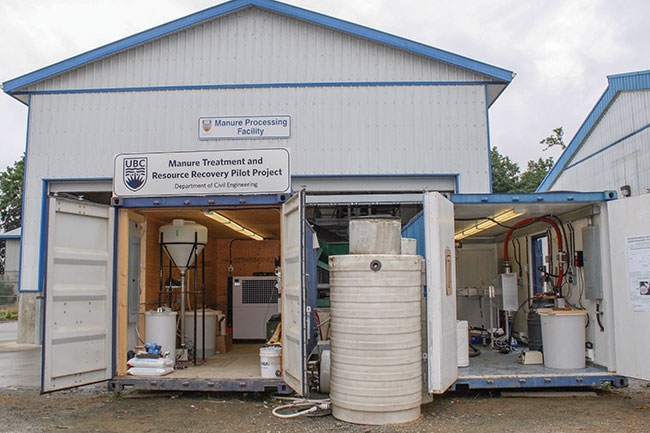 Boost Environmental Systems displays the pilot scale MW-AOP and struvite crystallizer set up at the University of British Columbia Dairy Centre, Agassiz in 2018.

Vancouver-based Boost Environmental Systems, a company created and staffed by leading University of British Columbia researchers, is in the final stages of proving a new and highly-efficient method for managing livestock manure.

Called microwave enhanced advanced oxidation process (MW-AOP), the technology not only shrinks the volume of manure by 60 percent and significantly reduces greenhouse gas emissions, it isolates up to 90 percent of manure’s phosphorus, decreasing run-off concerns and creating a new revenue stream for farmers. Fifteen years in the making, researchers hope this technology is a game changer for manure management on dairy farms.

“One of the big issues that often goes unnoticed on dairy farms is the issue of nutrient management. Usually farmers have their own land that they spread their manure across. But, though nitrogen and phosphorus accumulation isn’t visible, it’s always underlying and it’s getting serious,” says Dr. Asha Srinivasan, Boost Environmental Systems’ chief technology officer. “It is going to affect farmers’ whole operations and the welfare of their animals too. We’ve gone past the stage where it’s okay to just dump manure on fields. To maintain sustainable farms, manure management should be of huge interest to farmers.”

She adds that long-term sustainability will depend on farmers pursuing all available revenue streams. “If farmers can produce more biogas and produce marketable struvite (phosphorus fertilizer) too, they will be ahead of the curve.”

Boost Environmental Systems’ process begins with a simple separation of coarse solids (bedding) from the liquid component of manure. The remaining slurry then undergoes MW- AOP, which uses microwave heating and hydrogen peroxide to solubilize (dissolve in water) organics and nutrients contained in the manure.

Following the MW-AOP, the slurry is sent to an anaerobic digester for further breakdown. Pretreating the slurry via MW- AOP speeds up and improves anaerobic digestion significantly, converting difficult to biodegrade portions of dairy manure into easily biodegradable material. This increases methane production and reduces the digester’s necessary size.

After the anaerobic digestion phase, the slurry’s liquid and solid components are again separated. The solid portion, which now contains only low nutrient levels, is considered a Class A Biosolid and can be applied to land. Meanwhile, the liquid component next undergoes nutrient recovery. The MW-AOP releases nitrogen, phosphorus, potassium, magnesium and calcium into the solution, allowing all to be recovered. Most importantly, the process solubilizes a full 90 percent of manure’s contained phosphorus, allowing it to be removed as concentrated, almost granular struvite at the recovery stage.

According to Boost Environmental Systems’ published calculations, manure from a 120-dairy cow herd, processed via microwave AOP technology and an anaerobic digester, should produce between $23,000 and $53,000 worth of marketable struvite (approximately 19 tons) annually, and keep 2.7 tons of phosphate per year from being applied to farmland.

“Phosphorus is a very critical, limited resource. Because it is in living matter and crops use it, all animal and human waste contains phosphorus. So, why not just reuse it? That eliminates the problem of run-off and means that the resource is not wasted,” Srinivasan says.

“The UBC Department of Civil Engineering pioneered the phosphorus crystallization process, but where we come into the picture is you can only recover so much phosphorus using traditional nutrient recovery processes. Manure is very complex in nature and not easy to break down, but the MW- AOP can do it. It solubilizes nutrients into their smallest form, which is the most readily usable, allowing you to get double or triple the amount of struvite you would without the MW- AOP process.”

Due to the fact that so much of the nutrient is removed, wastewater can be managed on-farm without concerns about run-off causing groundwater contamination or eutrophication of nearby bodies of water.

The research team is currently testing how much additional biogas can be produced by mixing manure with fats, oils and grease (FOG) from third-party suppliers such as restaurants. FOG is an energy-rich resource that offers benefit to farmers both in tipping fees from the businesses that need to get rid of their FOG, and from additional biogas production.

“The problem with dairy manure is that it’s not a great substrate for anaerobic digestion because a cow’s gut is itself a very good digester,” Srinivasan says. “What comes out of a cow is pretty much what cannot be easily digested in any digester: A cow or an anaerobic digester. You don’t see widespread use of bio-digesters for that reason. But, if you can treat manure and FOG with MW- AOP, you can greatly improve biogas production.”

MW-AOP is currently being tested in both human and agriculture waste applications. The technology offers real potential for municipal waste water management, given that no other technology has yet proven so efficient at reducing sewage sludge. Currently, MW-AOP systems are being tested at municipal sewage treatment plants in Vancouver and Abbotsford, B.C.

Meanwhile, MW-AOP is also being proof-of-concept tested at the University of B.C.’s Dairy Education and Research Centre in Agassiz, BC. Here, a 25-kW pilot-scale MW-AOP system and a pilot scale struvite crystallizer proved very effective in reducing manure solids reduction and capturing nutrients. Now, an anaerobic digestion system is being integrated into the pilot. This combination of technology will allow the best possible nutrient management scheme, eliminating the need for trucking of excess manure, recovering phosphorus and nitrogen, obtaining a value-added product, enhancing anaerobic digestion and improving solid/liquid separation.

Srinivasan says research and development at the municipal sewer plants play an important role in the development of the manure management system as well.

“Even though we’re talking two different applications, any scale up we see in one sector will complement the second sector as well,” Srinivasan says. “We believe we will have the first commercial system in place in two years for municipal waste water. For manure waste management, the technology will be ready for full commercialization anywhere in the next year or two.”

The issues complicating manure management differ between jurisdictions and between livestock types. What is consistent across jurisdictions is the fact that farmland acreage is shrinking while production intensity is increasing, creating more manure with less area to spread it. Meanwhile, governments are beginning to look more seriously at legislating nutrient management in order to reduce greenhouse gas emissions, groundwater contamination, and eutrophication of water bodies.

“We’re coming to a situation where nutrient management has to be dealt with if we are going to continue to have as many animals in close proximity to people,” says Nelson Dinn, the Dairy Education and Research Centre’s operations manager. “At the moment, there is no economic incentive to buy this or any other manure management technology. They are all expensive. But it is coming. There will absolutely be more demand for nutrient management technology in the future.”

Though the majority of producers still spread manure on agricultural land, there is already starting to be a push towards other options. Some farmers have begun to centrifuge the slurry to pull out the liquids and phosphorus. Several years ago, B.C.’s provincial government sponsored a pilot project wherein they brought a centrifuge to a handful of Fraser Valley dairy farms to determine the feasibility of centrifuges on average British Columbian farms.

Perhaps a better option than spreading manure, centrifuging doesn’t entirely solve the issue of exporting waste off one’s land, however, since the process leaves behind unmarketable, high-phosphorus solids. Others are investing in bio-digesters which, while they do reduce bulk, do not on their own remove any nutrients. Others are also looking at a technology that uses polymers to remove the phosphorus. This process, however, remains very expensive.

“All of these systems – the polymer systems, the centrifuge, the Boost system – they all have high frontend capital costs and high operating costs. We’re not talking about just a basic piece of equipment. To keep the technology operating is another job on the farm. It’s not always easy and it’s definitely not cheap. It comes down to which solves the most problems for your application. You really have to dig down and ask ‘how can I apply it to my operation?’” Dinn says.

“There are several different types of systems that will remove P from your manure (at differing levels of removal efficiency), but if it results in having a mountain of high P solids, then what? Some P has now been removed from the manure pit, but it’s still in a different pile. What do you do with it? You have to have a plan all the way through to the end point,” he adds.

Srinivasan admits that MW-AOP’s capital cost is likely to be a barrier to significant agricultural uptake.

“If you compare existing technologies that are similar to MW-AOP, our capital cost is much lower than anything else available on the market, because our process is simpler and modular in design. But, despite that, I understand that from a farmer’s perspective, the costs are high,” she says.

“If you look at the economics, a larger farm with a herd of 500 or 1,000 would see economic returns from this technology. But for smaller farms, it would probably be difficult for them. If government wants to promote manure management technologies by providing incentives or other forms of support, then I’m sure there is huge commercial potential.”

Recognizing that today’s ‘spread it and forget it’ manure management won’t work in the near future, B.C.’s dairy farmers are already investing in supporting various research initiatives, including Boost Environmental Systems’ IMPACT research.

“The dairy industry has been very supportive of seeing these technologies move forward because as an industry, B.C. dairy farmers have been very proactive in staying ahead of the curve and doing what’s right,” Dinn says.