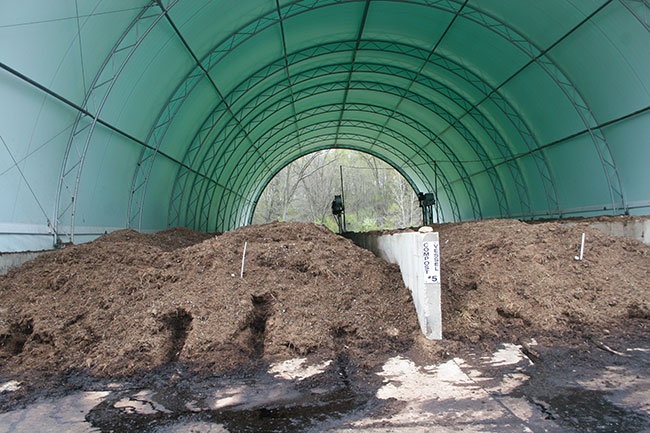 Bull Country Compost has eight vessels with 3,000 yards of material continually being processed by about nine employees, some full-time and some part-time/seasonal. Contributed photo

When Tim Sigrist came back to the family farm in Dundee, Ohio, after college, his father John told him he needed to find a new revenue stream. Eventually that would be a booming composted manure business, but first Tim drove a canned milk route.

“Not long after, we learned that the soil surrounding the farm where we had been spreading liquid manure was completely saturated with nutrients,” he remembers. “At the time, in the early 1990s, we had over 350 dairy cattle. Our extension agent suggested composting our solid manure and we decided to try it as a way to deal with the excess manure. The idea of selling the compost came later.”

There were no best practices available for manure composting – let alone much basic research – so Tim was left to experiment with different methods (more on that later). But success was achieved and by 1994, Bull Country Compost was born.

Demand was strong right away – Sigrist made the product attractive by offering delivery – but as word spread, demand started to outstrip supply. They needed more manure, and about three years in, another revenue stream was born through taking horse manure from their Amish neighbors along with manure from other area farms.

Ten percent of the manure currently comes from their farm (Tim’s parents John and Linda sold the dairy cows in 2013 but continue to raise about 120 dairy heifers), with the remaining from other farms, auction barns and seasonal fairs.

“We have farms where we haul out once a year and others where we do pick-up every week,” says Sigrist. “All locations pay us to take it away and there is a monthly fee to have a dumpster placed. Due to wear and tear on the dumpsters and the extensive cost of trucking – and the fact that some locations are up to 100 miles away – we can’t haul it for free.”

Indeed, it was early on that Sigrist realized it would be easier to provide large manure collection bins at farms, and that number of bins continues to grow.

“They’re 30-yard roll-off dumpsters made by a nearby manufacturer,” he says. “Because manure is so corrosive, we have to continually repair and replace them.”

Back when he started, Tim knew the basics of composting. Factors such as the type of manure, composting method (oxygenation) and weather would all affect timelines and quality of the final product. He first tried windrows turned by tractor, but it was labor intensive and the Ohio rains kept the material too wet. He researched various types of vessel structures and built one of his own with a concrete base.

“It was 150-by-80 feet with a homemade top supported by wood beams,” Sigrist explains. “There were two rows of material 10-feet wide.”

Bull Country Compost has eight vessels with 3,000 yards of material continually being processed by about nine employees, some full-time and some part-time/seasonal.

Over time, he added more vessels, making them wider to accommodate larger equipment, better aerated and better able deal with excess water. Older vessels were aerated using pipes running through the manure, and newer vessels have aeration constructed into the concrete floor through ditches with perforated pipes. This arrangement allows liquid to flow out as composting proceeds.

“The liquid is captured in a drainage system that empties into our manure lagoon,” Sigrist explains. “There is a small fan in each vessel that feeds into the perforated pipes to aid air flow, and this significantly increases the temperature as well.”

The manure is composted for six to eight weeks being moved to one of three curing sheds for six to eight months. Screening is next, then bagging in the bagging shed or placement in piles for bulk sale. Sigrist created the bagging system using auger equipment and a homemade conveyor, with which four employees can bag and stack almost five tons of compost an hour.

In total, Bull Country Compost has eight vessels, with 3,000 yards of material continually being processed by about nine employees, some full-time and some part-time/seasonal (Sigrist says that similarly to many industries, finding people willing to do manual labor like bagging can be difficult). The entire operation stretches over three acres.

Multiple groups from both Ohio State University and various local soil and water conservation districts have toured the site, and Sigrist has hosted curious visitors from as far away as Alaska.

While years ago people were generally unsure about composted manure, that has changed.

“It’s been 25 years and we have many loyal customers,” Sigrist says. “Word of mouth is the best advertisement there is. Also, many of our retail locations have an open bag of compost beside the pallet of bags for sale, and this helps people to ‘see, smell and feel’ the compost. Also, through the media and internet, people’s general awareness of soil and environmental health has risen and many consumers have learned the difference between raw manure and compost on their own.”

The farm is still active, with the heifers and 500 acres of crops. Sigrist says the manure composting and farm activities support each other in unique ways, making the entire operation able to support multiple generations of his family.

The composting business has also allowed the family to branch out into offering other services such as custom litter spreader application and custom harvesting. No specific new markets or products are being pursued, but Sigrist says they are always keen to gain a larger share of the soil amendment market at garden centers, and always listen to feedback from customers and garden professionals.

“The entire journey has been a big learning experience,” he reflects. “From finding new markets and keeping up with growth to creating vessels and streamlining the process, we had to develop our own model as there weren’t any of its kind at the time.”

One project Sigrist hopes finish in the future is to pipe heat generated by the compost to the bagging shed.

“That way, bagging can start earlier in the year in more comfort,” he says. “I haven’t gotten to it yet, but in the meantime, we bought the employees nice insulated jackets!”