Manure is powering this Pennsylvania farm into the future. 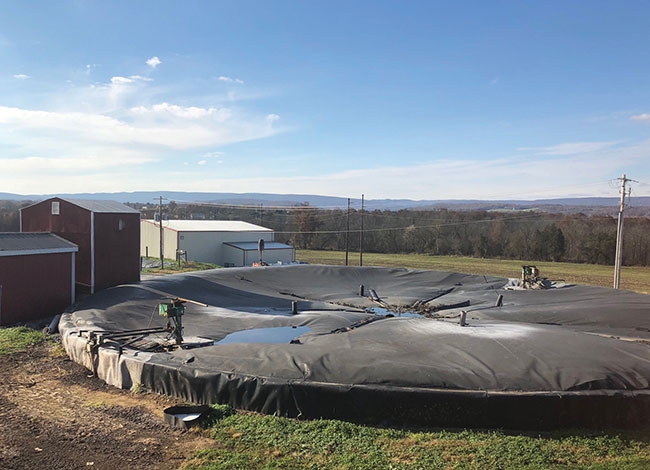 The story of how Reinford Farms in Mifflinton, Pennsylvania ended up where it is now – with sources of income and savings stemming from their digester – is both surprising and inspiring.

Reinford Farms was started in 1990 by Steve and Regina Reinford and now has 20 full-time employees, including their three adult sons – Chad, Brett and Drew. It was when Brett was in college that he first became familiar with digesters, and it got him thinking that one on the farm would be a great way to help the planet, reduce odor and better manage manure from their 720-head dairy farm.

“Actually, the biggest reason we built a digester was for the odor-reducing capabilities,” Brett explains. “It doesn’t reduce all the odor, but it certainly helps. We are simply trying to be a better neighbor to our neighbors. We feel public relations is one of the keys to operating a successful farm.”

The family started investigating their options and were excited to find out that Pennsylvania had several grant programs for biogas projects. Reinford Farms hired Martin Construction to assist in applying for grant funding and to design the digester. Construction began in 2007 and was finished in 2008. The project cost $1.1 million at the time, but state and federal grants covered 60 percent of costs.

The system not only produces electricity to the farm, but sells it to the grid. Waste heat is used to operate a grain dryer, keep several farm buildings and their home. It also produces all the hot water needed for the dairy operation and the farm house. Digester solids are used as cattle bedding. The savings from not having to purchase electricity, heat and bedding alone add up to over $150,000 USD a year, and the profits from electricity are a bonus.

Another revenue stream comes from tipping fees for biodegradable food waste, which the Reinfords started accepting into their digester in 2008.

In mid-2017, in order to expand the amount of food waste they could use, the family purchased and installed a food waste depackager. This machine separates clear plastic wrapping, produce trays and other packaging from grocery store food waste, and then converts the food into a slurry, which is easily digested by the bacteria in the digester. The farm charges less than supermarkets would have to pay to the local landfill to accept the waste, so it’s a win-win situation for everyone.

“If the liquid food waste sources dry up, we are now able to pursue the packaged food waste to continue to provide feedstock of our digester,” Brett explains. “Recycling food waste has given our farm a different story, which has opened up opportunity for us to have access to customers at a different level. Food waste and what to do with it is has been a big topic in recent years. People are excited when finding that farmers can offer a sustainable solution to the problem.” As reinforcement of this notion, Reinford Farms won a Sustainability Award from the Innovation Center for U.S. Dairy in 2018.

A second system
The Reinfords are now planning to add another generator to the original 140-kw generator, a 500-kw unit, as well as a second digester.

“The second digester will be a lot bigger than our first,” Brett says. “We’ve run into some setbacks regarding funding but hope to work through it so we can start construction in early 2019. The reason for a bigger size is that we expect our cow numbers and food waste business to continue to grow and wanted to make sure we had the capacity. Our current digester was sized for 800 cows and no food waste. It’s currently over capacity and we have a very short detention time of the manure and food waste. We are losing some of the energy value of the feedstock because it’s being pushed through the digester too quickly. Installing our new digester will allow us to expand our cow numbers and food waste capacity.”

According to Brett, the gas scrubber in the first digester doesn’t work very well, but the new digester will have a scrubber that will properly clean gas from both digesters.

“This will hopefully allow us to get more life out of our generator engines,” he notes. “We expect both digesters to be running at full capacity (640 kHw), which should provide enough power for 400 to 500 houses.”

Prior to installing the digester, however, Brett notes that manure management was much simpler. Previoulsy, all the manure at Reinford Farms had been scraped into a pit and land applied, but the slurry was very thick and sometimes challenging to pump.

“When we installed the digester, we added a manure separator so we could bed the cows with the solids,” Brett reports. “Removing a lot of the solids helped the digester to break down the manure better. Our manure is now more viscos and we’ve installed pipes under that ground that we use to spread manure more efficiently. Also, there are a lot more pumps and mixers on the market now, so the manure management takes a lot more attention to ensure it is working properly.”

Reinford Farms hired Martin Construction to assist in applying for grant funding and to design the digester. Construction began in 2007 and was finished in 2008.

Points to consider
When asked whether he can imagine his family’s farm without the digester, Brett says that would be tough to do.

“It’s been so incorporated into our farm that when it is not working properly, the rest of the farm knows it immediately,” he says. “From the hot water to the financials, it’s all tied into the digester, so it’s critical that we successfully operate it and continue to look for ways to use its potential to bring additional value to the farm. I cannot imagine farming without a digester, but at the same time, we caution that they are not for everyone.”

On that note, Brett offers insights from the lessons he and his family has learned along the way. First, he advises planning ahead carefully. Where a digester is located on your farm determines how you can best utilize the value it can provide, he notes. He advises thinking ten or more years down the road to ensure that you can manage the space around the digester.

“Who knows, like us, your farm might grow and you’ll need more space to add an additional digester,” he says.

Brett also cautions that while their acceptance of food waste has been going on for over ten years, since installing the depackager in 2017, the challenges have become greater, not easier. He says managing the supply, or lack thereof, is still something they are getting used to.

Lastly, Brett advises anyone who wants to get a digester to first figure out their objectives.

“If you build a digester and expect it to simply make money, you’ll probably be disappointed,” he says. “It takes time and energy to manage a digester. Make sure it aligns with your strategic goals for your farm.”

There are no fossil fuels used on farm for heating or electricity.
Products created via digestion:

Energy: The farm is operating a 140 kW genset and in the process of upgrading to an additional 500 kW by end of 2019.