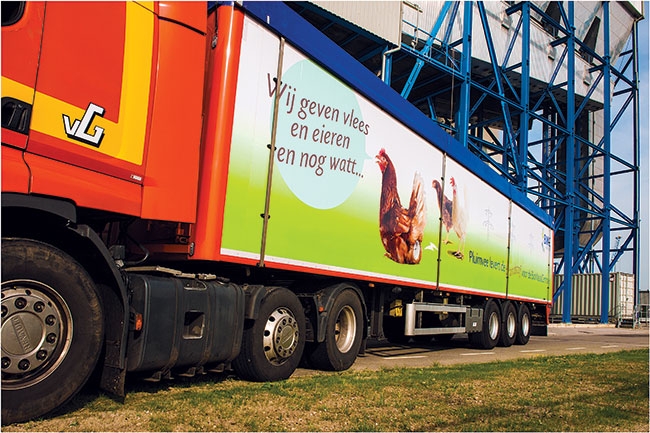 In Europe, where intensive livestock production is common in countries like the Netherlands, Spain and Germany, concern has been raised about its environmental consequences, including runoff of excessively applied nitrate and phosphate contamination of surface water and soil.

Manure produced by intensive livestock production can lead to atmospheric emissions of ammonia, nitrous oxide, and mono-nitrogen oxides, like NO and NO2, especially when directly spread on cropland. In the 1990s, EU council, parliament and commission met to discuss possible solutions. Those discussions led to the implementation of new, more stringent regulations, including the nitrates directive – better known as 91/676/EEC – which limits application rates of livestock manure to arable land. These restrictions led farmers to look for alternatives, such as composting and biogas production.

In the Netherlands, where agricultural production is especially intensive, the issue prompted poultry farmers into action. Together, they came up with a unique solution – convert poultry manure into electricity.

“We were producing too much manure in comparison to the arable land we had,” explained Wil van der Heijden MBA, director at Duurzame Energieproductie Pluimveehouderij (DEP), a co-operative of more than 600 Dutch poultry farmers who supply the Moerdijk-based power plant with poultry manure for fuel. “We also had a problem with too much phosphate in the soil and nitrogen in the water.”

Van der Heijden is right; Dutch farmers do produce more manure than the arable land around them can use. The issue doesn’t just affect poultry farmers either. In fact, Dutch dairy farmers were recently told they have to reduce herd size in order to comply with EU phosphate regulations.

Overproduction of manure has also been a problem for Dutch poultry farmers. Each year, poultry in the Netherlands produce approximately 1.3 million tonnes of litter. Of that, 650,000 tonnes is exported to Germany, Belgium and France for use as fertilizer – a job that is facilitated by traders who make money by taking manure out of the hands of farmers and putting it into the hands of other farmers. For decades, Dutch poultry farmers were at the mercy of these traders, who charged €30-35 ($33.34 to $38.90 US) per tonne for removal. For a 100,000-bird broiler farm, this amounted to €30,000 to €35,000 ($33,350 to $38,900 US) each year, a hefty fee that left many struggling.

In 1998, Dutch poultry farmers met to discuss how they could separate themselves from the traders, as well as regulations and borders. Their solution was to join forces with a power plant and turn poultry manure into electricity. In 1999, the farmers formed DEP. The farmer members supply litter to BMC Moerdijk, a company that produces electricity using a fluidized bed combustor.

“They wanted to be independent from traders, from the weather, from the borders, and the regulations in Germany and France,” said Van der Heijden. “They learned that poultry manure could be used as fuel for electricity production and they found that there was some experience in the U.K., although very small scale.”

From conceptualization to the plant’s opening, it took 10 years for their plan to become a reality. First, explained DEP co-operative director Wil van der Heijden, they had to find the right location, which turned out to be Moerdijk, a town in the south of the Netherlands in the province of North Brabant. Then they had to apply for permissions and subsidies, look for partners and financing, and finally draw up fair contracts, which Van der Heijden said were crucial for reducing risk. Construction on BMC Moerdijk began in 2006 and concluded in 2008.

Financing for the plant came from the bank, which fronted 80 percent of the overall cost. The rest came from BMC Moerdijk’s shareholders. Delta, the company that buys the electricity BMC produces, owns 50 percent of the shares. The farmers association ZLTO and DEP own the remaining shares at 33 and 17 percent respectively.

While Dutch poultry farmers were once paying €30 to €35 ($33.34 to $38.90 US) per tonne to traders for removal, in 2008, when BMC started production, farmers who joined the co-operative were contracted at €20 ($22 US) per tonne. Immediately, the traders dropped their rate to match that of BMC’s, said Van der Heijden.

Today, BMC processes some 430,000 tonnes of poultry manure – one-third of the total amount of poultry manure produced in the Netherlands – each year. Everyday, 60 trucks supply approximately 2,000 tonnes to the power plant. Using that manure, BMC generates 285,000 MWh of power each year. The plant uses a small amount of the electricity it produces and supplies approximately 245,000 MWh to the electrical grid. The electricity the company produces is enough to meet the needs of 80 percent of all Dutch poultry farmers for one year.

BMC Moerdijk doesn’t just produce electricity, though. It also produces ash, which is a by-product of the incineration process. The ash contains highly valuable minerals, like potassium and phosphorus. It is sold to customers in the agricultural and horticultural sectors outside of the Netherlands. Those customers use the ash, sold under the name PeaKsoil, as a fertilizer to improve soil.

In its first years of operation, BMC Moerdijk learned several important lessons. First, not all types of manure are suitable for processing.

“We thought poultry manure is poultry manure, but it isn’t,” said Van der Heijden. “There are a lot of differences between manure from layer hens and broilers, and turkeys and breeders.”

“It is very important to have stable supply and demand,” explained Van der Heijden. “We also learned that the cooperative structure was useful for this type of corporation. We also learned that fixed contracts are very crucial because otherwise halfway all of the members would have left the co-operative. The fixed contracts were very useful for us and the bank to reduce the risks.”

Electricity from poultry manure is a cleaner alternative to direct land application, explained Gerd-Jan de Leeuw, MSc, at a recent visit to the plant. De Leeuw is responsible for the fuel and PeaKsoil at BMC Moerdijk. Electricity production from poultry manure saves on emissions from fossil fuel combustion. Spreading poultry manure on the land also causes larger emissions of NH3, N2O and NOx than combustion does. Finally, the ash that’s recovered has a lower mass and volume than the manure, making it more suitable for export to regions that require phosphate.

“All of the minerals, except nitrogen and organic matter, are in the PeaKsoil, so in the ash,” said De Leeuw. “We can sell it as a fertilizer. We sell it to countries where they have a phosphate demand.”

Those countries include Belgium, France and the United Kingdom where it has been especially useful in corn and wheat crops.

All in all, BMC has proven itself as a sustainable and reliable electricity producer. Dutch poultry farmers, as a result of their cooperation with BMC, have not only complied with their obligation to process poultry manure, but also helped reduce the Dutch phosphorus surplus by approximately 8,000,000 kg P2O5 each year. The company also contributes to the Netherlands’ goal of lowering CO2 emissions and using 14 percent renewable energy by 2020. Finally, BMC has helped reduce poultry farmers’ NH3 emissions by 25 percent since 2008.

This summer, BMC was in heavy discussion with DEP, as the 10-year contracts with its members are up at the end of 2017. The discussions were a great success with 87 percent of poultry farmer members renewing their contracts, which will start January 1, 2018. Those contracts expire at the end of 2029. On average, members will pay €6.50 ($7.20 US) per tonne, an amazing reduction since 2007.