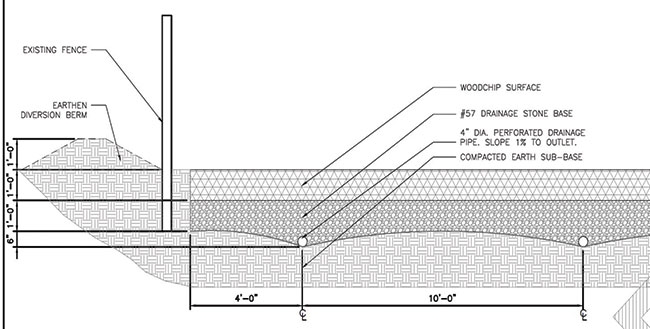 Wood chip pads were already part of the Irish, British and New Zealand waste management scene, but it wasn’t until Tom Basden – an extension specialist with West Virginia University – noticed many beef producers were having winter time pasture issues, that the system was introduced to the U.S.

In the mid-Atlantic, there are many small to medium farms (50 to 200 head) that are pasture-based, cow-calf operations. The cows go out to pasture spring through fall, but when they are brought back into the barnyard to be confined for the winter, environmental issues arise, leading to potential regulatory issues. But, if the farmers were to put the animals back in their pastures it would create damage to the fields.

“There were a number of issues, both from a production standpoint and from an environmental and regulation standpoint,” says Joshua Faulkner, farming and climate change co-ordinator at the University of Vermont. “Tom noticed that in Ireland, Scotland and the U.K., they were using what they call ‘wood chip out-wintering areas’ – which we’ve shortened to wood chip pads – for managing cattle in the winter time. Then after a little more research, we found these are actually used in New Zealand too. Instead of a concrete barnyard, they have a wood chip barnyard on small to medium size dairies.”

The construction of all the sites was similar to the one constructed in Ohio County, West Virginia, which was approximately 80-feet by 80-feet and next to a feeding barn. It was excavated to a depth of roughly 20-inches with the subgrade having a 0.5 percent slope to the west. Broad parallel ridges crossing the width of the area were formed into the subgrade of roughly 10-foot intervals to encourage drainage into perforated drainage pipe, also placed at 10-foot intervals between the ridges.

The subgrade and drainage pipes were covered by a layer of drainage stone (maximum one foot in depth). The drainage system directed effluent away from the heavy-use area via gravity to a holding tank, which was buried to prevent freezing.  (In some of the other sites, the effluent to drained to grass filter strips.)

A mixture of regional hardwood species were chipped and placed on the drainage stone (about 10-inches thick) to provide a trafficable, durable, and well-drained surface.

“The first one we built was directly adjacent to a roofed winter feeding barn,” says Faulkner. “Then the second one is the biggest by far and it’s on the university research farm, which is a dairy farm, but it’s all dry cows and heifers.”

These first two pads have been in operation for about five years. The newer pads were built further north, and Faulkner and his team are still waiting to see the results after they have gone through a hard winter, with sub-freezing temperatures for weeks.

But there are plenty of findings being collected from the mid-Atlantic wood chip pads.

“Most of the phosphorous and nitrogen seem to stay in the manure solids and stay in the wood chips, so you kind of capture it that way, and you get this really diluted wastewater.”

In some cases, the runoff is collected and then used on the fields later or directed to a grass filter strip.

“The phosphorous [in the waste water] doesn’t seem to be high enough that we have to worry about it building up in the soil like you would with stronger wastewater,” says Faulkner.

He also sees the wood chip pads as a good possible fit for small dairies that already have storage structures for runoff in place.

The chips that have absorbed the nutrients are also a key piece of the system’s value.

“Our recommendation is that at the end of the winter, just after you’ve released cattle back on the pastures, when pastures are ready for grazing, you scrape off the top two or three inches of the wood chips. Those chips should have most of the manure,” says Faulkner. “The chips can then be composted through the summer and then spread and used as a fertilizer on your fields. Then top dress with another couple two or three inches of wood chips before you stock it again – in the fall before you go into your next winter season.”

There hasn’t been much testing on the quality of wood chip compost, but Faulkner says from what data he has seen it’s a fine source of fertilizer.

“It’s not like a straight manure because it does have the wood chips in it. So, it takes longer to compost. And, you also want to make sure it composts long enough that you’ve broken down the wood chips before application on your hay field.”

Faulkner and his team are already seeing keen interest by farmers in the wood chip pads, in part because of their resistance to concrete.

“Concrete is fairly permanent, and farmers are concerned about general cow comfort. The wood chip pads have been documented to lead to higher weight gain in beef cattle, and it just seems to be better for animal health and comfort.”

“At the farm in Ohio County, WV, where we first installed, and the gates were open, so the cattle could leave the wood chip pad whenever they wanted. They would just be hanging out on there, lying down. It wasn’t muddy like the rest of the field. It wasn’t slick and wet. It was just really nice, well-drained, comfortable, and firm.”

There are other reasons the wood chip pad might be a good alternative to concrete. Besides animal comfort, muck doesn’t build on top and require continual scraping, like it does with concrete. Instead the manure works its way into the chips.

The wood chip pad is also much less expensive to install.

“Based upon the two West Virginia systems, we saw that a wood chip pad would cost about $163 a cow, and a concrete about $463 per cow,” says Faulkner. “You do have the cost of replacing wood chips every year to top dress it, but I think there’s reduced management cost because you’re not scraping the concrete every few days with a wood chip.”

Faulkner and his team also think there is a value in raising livestock outside. He says studies from the U.K. have shown that unless it’s bitter cold or extremely wet, cattle are perfectly adjusted to being out in the weather and the farmer can avoid air quality issues and potential respiratory problems.

Some farmers, however, are concerned that if they move from an all-pasture system to a wood chip pad system, they could be exposing themselves to environmental regulations that they are currently exempt from.

“That’s true,” says Faulkner. “Some farmers would rather damage their pastures than risk some sort of environmental consequence. And I understand that. But we feel like the wood chip pad is healthy for the animals and if it’s constructed, designed, and managed well there’s no risk.”

In fact, during spring 2016 in Vermont, the state actually helped cost share and pay for the wood chip pad.

“Its was paid with environmental conservation funds and the only stipulation was that we needed to capture the wastewater – all the drainage water needed to into a small holding pond instead of sending it to a vegetated grass buffer strip,” says Faulkner. “It did raise the cost of the project, but they paid for most of it, so it worked out pretty well.”

Faulkner and his team are pleased with the ongoing support of the West Virginia and Vermont Extension Services, and will continue to look for funding to continue the studies.

“Top of the list will be an in-depth economic analysis and to also look at animal comfort, and try to quantify those,” says Faulkner. “But even without additional research dollars, we’re doing outreach, and workshops at our extension system, both in Vermont and West Virginia and just generate interest. And we will assist with design for any farmer who is interested.”

Faulkner would love to see many more wood chip pads being built around the country.

“I’d love to see farmers start to transition away from concrete as the only options, and start to consider these types of barnyards for winter ‘heavy use’ areas.”