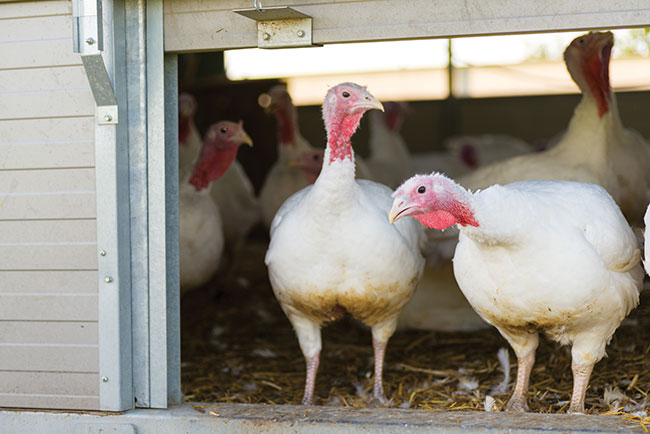 To say that Mike and Paula Thompson are stewards of the land they farm is something of an understatement. As a third-generation farmer, Mike Thompson takes the preservation and improvement of land, water and the environment very seriously, and is constantly looking for new ways to benefit the family’s turkey farm, Round Hill Poultry in Rockingham County, VA.

Thompson’s grandfather was involved in hatching chicks and poults and helped to found Rockingham Poultry starting in 1951. Some of the chicken houses he built in Rockingham are still standing.

For Thompson, making the land a little bit better than what it was when he started farming was very important to him. His actions spoke louder, and Round Hill Poultry won the U.S. Poultry and Egg Association’s 2019 Family Farm Environmental Excellence award as well as the Cargill Friends of the Environment award in 2018. Thompson was also asked to be on the Virginia No Till Alliance’s committee to establish rules and regulations to help control animal waste in Virginia for the next decade. He sees environmental stewardship as a way to better the earth while also creating a profitable business. 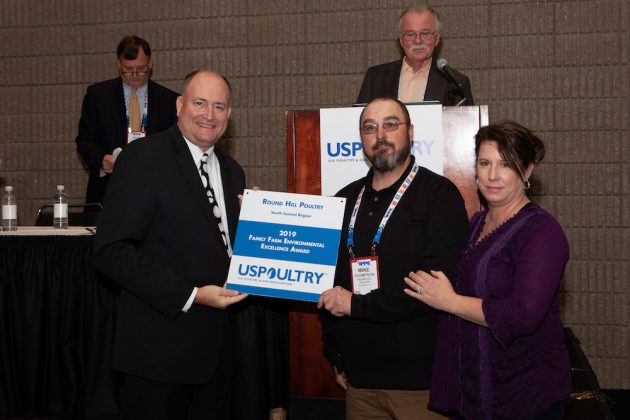 “We’re totally all in/all out, meaning we start poults and finish to market,” he says. “Round Hill consists of 600 acres at the main farm, where we also raise row crops, corn, beans, wheat and hay and an additional 2,000 acres is leased for those crops, [and is] within the three counties surrounding [Rockingham County].”

Round Hill now produces about 412,500 turkeys a year in three cycles of 137,500 birds each in the 10 poultry houses. In 2018, the operation added new barns to take the operation from 282,000 birds a year to the present amount, a 46-percent increase in capacity. That amount of turkeys leads to a lot of dry litter waste which, if managed improperly, could lead to significant environmental problems. The issue grows in sensitivity when its noted that Round Hill is located in the Chesapeake Bay watershed region, which consistently battles algal blooms and nutrient runoff concerns.

“I work through a broker to sell leftover litter each year,” Thompson says. “I am vigilant in where and who it gets transferred to. As we try to get it out of the watershed however, trucking is the expense [that] drives the price to commercial fertilizers and it is sometimes hard to move.”

His manure broker is arranged through the poultry litter hotline program, a program of the Virginia Poultry Federation. The hotline connects growers to brokers and haulers and Thompson will only permit his litter to be sold to farmers who are not in the Chesapeake Bay watershed area and who have a nutrient management plan.

Not long after the newest turkey barns were built in 2018, the Thompsons built a new litter shed for one of the other farm’s existing barns, bringing overall litter storage capacity to 12,000 tons of dry waste. The new shed is big enough to accommodate litter trucks so that there is no spillage during loading. It also includes a 63’ x 30’ concrete composting area, guttering for clean water diversion and a four-foot gravel buffer circling the shed.

On-farm uses of litter average about 8,000 to 10,000 tons annually. The rest, almost 65 percent of the litter produced, is trucked off-farm. Pasture and forage fields get about nine percent of the total waste litter and row crops get about 26 percent.

Thompson makes the best use of the litter before composting it.

Although best management practices for his type of operation state that litter should be cleaned from barns after every sixth flock, Thompson cleans out the barns after every third flock. The family has found that this improves flock health and performance as well as preventing the build-up of excess waste nutrients.

Thompson knows that applying more and more nutrients is seldom the way to better crops. He has a structured plan he follows to ensure proper nutrient application for the right rate of uptake and plant growth.

“We strictly follow our nutrient management plan as far as rates and application,” he says. “Fields are sampled in the winter, prior to the application of litter and then we do tissue sampling when crops are growing for side-dressing of urea.”

Leaves and stalks from previous crops (stover) are never removed, but instead are incorporated back into the soil. Because Round Hill is a no-till operation, a few years ago, Thompson purchased a Turbo Till, to incorporate the residues, but it is used only to a depth of two inches to shred the stover and to loosen the soil to allow for small grain contact. All of Round Hill’s crops are shelled for grain.

“We’ve have been totally no-till for 20 years now,” he says. “No deep tillage whatsoever. We rotate with wheat and beans from corn.” He says the move to no-till was a “big learning curve, but we found it more beneficial in using what we apply and it is more manageable.”

He says the move to no-till was a “big learning curve, but we found it more beneficial in using what we apply and it is more manageable.”

In 2018, Thompson saw the benefits of his nutrient and no-till management plans. With record rainfalls, there was no soil loss to washouts. The current soil management practices have led Thompson to describe his soil as a sponge, though he has different sponge types to manage.

“No-till is the way to go for us, but there comes a time where we have to manage our sponge type,” he says. “We have learned on hay [planting] ground we want to split applications of litter to two times a year.”

Additionally, he has found that grass can only make use of between 40 and 60 pounds of nitrogen per cutting.

“So why put it all down in one shot?” he asks. “Normally [we apply] two tons per year per the nutrient management plan. We have found an increase of 30 per cent yield by doing this. The nutrient is not lost for the second and third cuttings, but utilized.”

Water management is also a part of Thompson’s environmental practices and the newest poultry barns make use of water plumes instead of retention ponds in order to safely release water rather than holding runoff. Turkey houses built in 2014 make use of drainage ditches and sediment ponds on the site to prevent runoff. The home farm also makes use of ditches that flow into crop fields with rock lining to slow runoff and act as buffers.

600 spruces trees were planted around the turkey houses to provide a wind buffer, but also to catch exhaust dust and odors from the barn fans.

Good neighbors do good things on their farms and for Thompson this also means 600 spruces trees planted around the turkey houses to provide a wind buffer, but also to catch exhaust dust and odors from the barn fans. It’s part of an overall farm program partly established by his enrolment in the Natural Resource Conservation Service’s Conservation Stewardship Program. Along with no-till practices, the program requires pre-side dress soil nitrate testing, GPS and low-drift nozzles on crop sprayers, litter spreaders with GPS to prevent over-application and a number of other management techniques.

The Thompsons are seeing the results of their work both in their own production levels and in the health of the Chesapeake Bay. Management of excess nutrients is a big job, but the steps made by producers like Thompson help make a meaningful difference.