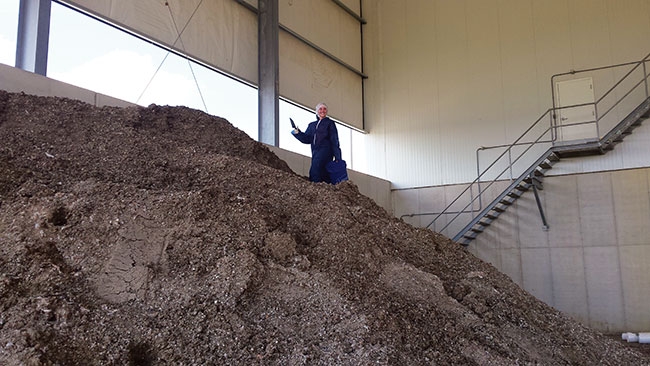 Pennsylvania Department of Environmental Protection recently funded a research study to examine the manure and litter nutrient production in Pennsylvania poultry farms that may be directly affecting the Chesapeake Bay Watershed.

Pennsylvania State University graduate assistant Erica Rogers conducted the study in 2016/2017. The first part of the study was a census in Pennsylvania performed by PennAg Industries, and the second portion focused on the collection of manure. And, what Rogers discovered is good news for poultry farmers.

“We kind of refer to the TMDL as a nutrient diet for the Chesapeake Bay,” Rogers explains. “There are annual allotments of nitrogen, phosphorous, and sediment that are allowed into the Bay each year in order to decrease those excess nutrients that are present. That is what spurred my work. We weren’t sure exactly what the data was that was being used to make the regulations, specifically for poultry, within the Chesapeake Bay TMDL.”

The excess nitrogen, phosphorous and sediments found in the Bay’s water system come from the fertilizers contained in surface water run-off. In order to control these excess nutrients, it’s imperative to have accurate data to draw from. The concern sparking this research project was that the data being used in the Chesapeake Bay TMDL’s models has become outdated.

Rogers and her research team found today’s models were using data gathered from studies done from both the 1980s and 2005 by the American Society of Agricultural and Biological Engineers. The information – some of it more than 30 years old – didn’t reflect the many new farming methods introduced, such as organic and raised without antibiotic (RWA) poultry farming.

Rogers felt, without conducting a new study, there was no way of knowing how new farming methods impacted the validity of the models. With all the improvements within the farming industry, the criterions set by the American Society of Agricultural and Biological Engineers could be skewed.

“I went to probably 60 or 70 different poultry farms over the course of about a year-and-a-half to collect manure samples to have them analyzed to see what their nutrient values were.”

The research team looked at the different species within poultry (layers, layer and broiler breeders, broilers, pullets used for egg layers, and turkeys) and sampled litter from the four most common management styles within each species and then sampled three different flocks within each of those four styles.

Within the egg layers management system, Rogers drew samples from both the high-rise pit and belted cage systems.

“First we started with getting some historical layer data from 2012-2015 from high-rise pit houses and then belted houses. We wanted to see if there was a difference between the two. Because the way the manure is stored is different, and that can affect your nutrient values.”

The cages in a high-rise pit house are set up in an A-frame system, says Rogers.

“When the hens excrete the manure, it dropped directly below (not onto the birds below them) but it dropped into a pit and typically stays there for the lifecycle of the flock.”

The manure was cleaned out in the fall and in the spring when the crops need fertilizing. In the belted system, the cages were stacked on top of one another with conveyer belts underneath each cage where the manure is collected and stored either in the back of the house, or in a separate building.

Rogers also sampled cage-free floor layers, as well as cage-free aviary layers. For each management styles within the egg layer management system, she found the manure was stored differently and affected the nutrient values of the litter.

The fourth broiler management style sampled was the built-up litter style, where litter was not removed between flocks, except where the drinkers and feeders were located, but layered and replaced biannually, similarly to the high-rise pit management style.

After analyzing the immense amount of information, Rogers and her team drew three conclusions. First, today’s poultry are more efficient as feed and nutrient utilizers.

“We have more tools in our tool kit that help us to help these birds to be more efficient,” Rogers says. “Because, essentially, the meat bird [farmers] were able to grow a bigger bird with less feed and less time, and they utilized a lot of those nutrients better, which means less of that is going into the manure that would normally be wasted.”

The second conclusion – farmers are doing a better job of managing the manure than had been anticipated.

“I think this study is really going to echo to the TMDL – and to those who are in charge of the TMDL – that farmers are doing a better job of managing these nutrients and managing these birds overall. That’s not being accounted for at this point, which is unfortunate. I think it will put farmers in a better spotlight for those, especially consumers, who are not necessarily in-tune with how the industry works as a whole. It will help them see that farmers are not just willy-nilly throwing a bunch of manure on the field. They’re actually doing a good job of making sure they’re being environmentally safe with it, too.”

The third and final conclusion – the new findings need to be immediately updated into the current TMDL’s models, as far as the nutrient concentrations and the actual manure production is concerned.

According to Rogers, the study also demonstrated the need for continually updating the data in order to account for the constant shifting of consumer preferences, changing management styles, technological advancements, and the evolving genetics of the birds.

“I think a lot of generalizations are being made within the Chesapeake Bay TMDL that, unfortunately, do not accurately represent what the true story is. This study is a good start, but there’s a lot more to do with it. At this point, we’ve just got to get [the information] out for everyone else to see.”