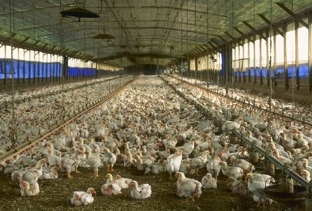 October 23, 2017, Richmond, VA – The poultry industry’s growing footprint on Virginia’s Eastern Shore is getting new scrutiny from regulators and activists after a head-turning decision by a state regulatory body to demand harsher punishment for pollution violations at a chicken-processing plant.

The Virginia State Water Control Board, a citizen body appointed by the governor, this summer rejected state regulators’ recommended fines against a Tyson Foods facility that’s a hub for a growing number of chicken houses in Accomack County.

By a vote of 4 to 1, the board decided in July that a $26,160 fine proposed by the Department of Environmental Quality was insufficient, given the history of violations at the plant. The board’s rare rejection of a consent order negotiated by the DEQ to settle a pollution violation heartened activists, who fear the poultry industry’s expansion on their narrow, low-lying stretch of the Delmarva Peninsula puts the Chesapeake Bay and their quality of life at risk. READ MORE