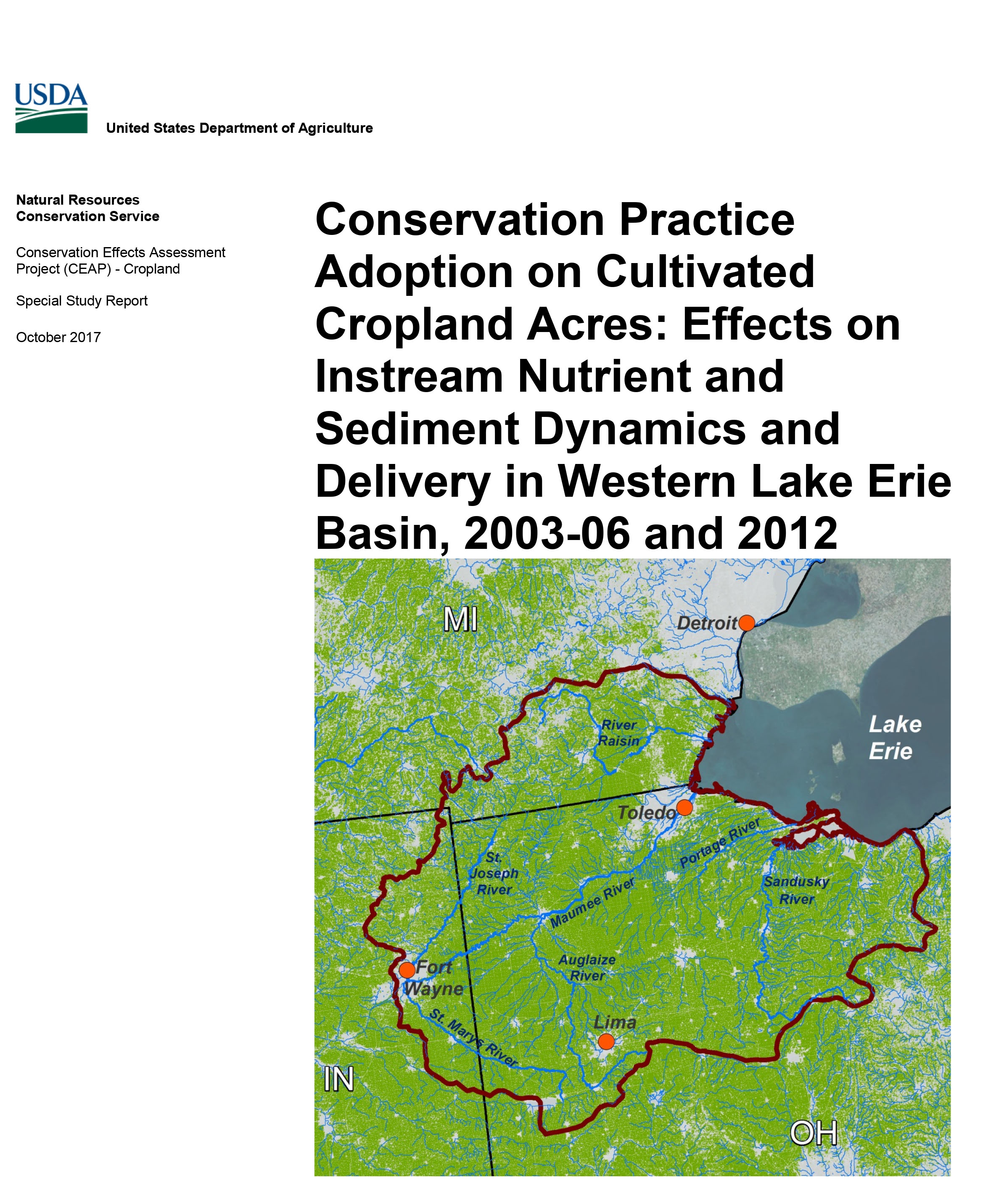 October 12, 2017, Washington, DC – Voluntary conservation practices adopted by farmers in the Western Lake Erie basin are having positive impacts downstream, according to a new report from the U.S. Department of Agriculture (USDA).

The report – by USDA’s Conservation Effects Assessment Project (CEAP) – shows these practices reduce sediment losses from fields by an estimated 80 percent and reduce the amount of sediment being delivered to Lake Erie by an estimated 40 percent.

“One thing I know for certain – the benefits of conservation flow downstream,” said Leonard Jordan, acting chief of USDA’s Natural Resources Conservation Service (NRCS). “When hundreds of farms take action in one area, one watershed, it can make a world of difference. And our conservation planning and financial support provides producers a step-by-step plan to achieve those results.”

NRCS helps farmers make conservation improvements on working lands. Reports like this one help the agency better understand the effectiveness of conservation practices and how to adapt conservation approaches, Jordan said. Though there is still work to be done, this report shows that private landowners are responding to regional needs and putting conservation plans into action to improve water quality across the basin.

This is the second of a two-part report on the Western Lake Erie basin, which has historically suffered from high levels of nutrients and sediment associated with human activities in the region. The first report focused on edge-of-field losses, whereas this report focuses on sediment and nutrients entering streams, rivers and Lake Erie.

Water quality is directly impacted by nutrients and sediment. By reducing the amount of nitrogen and phosphorus entering basin waterways, farmers are doing their part to reduce the chances of harmful algal blooms that may lead to hypoxia, or oxygen depletion, throughout the lake. Algal blooms can make the lake unsuitable as a source of drinking water and recreation as well as habitat for fish and wildlife.

Farmers use a variety of conservation practices to reduce losses of nutrients and sediment. The practices evaluated by CEAP include strategies like nutrient management, cover crops and structural erosion control. Cutting-edge technologies that use GPS and variable rate applications are also assessed.

“Conservation applied on any acre delivers an environmental benefit, but when conservation efforts target the most vulnerable watersheds and lands, the results are even greater,” added Jordan. “We know it won’t solve the problem alone, but it’s a critical piece of the broader solution.”

The effectiveness of targeted conservation planning is also assessed in the report. These results and other CEAP assessments in the region provide another source for informing science-based conservation efforts within the basin. Upcoming assessments will continue to build upon this base.