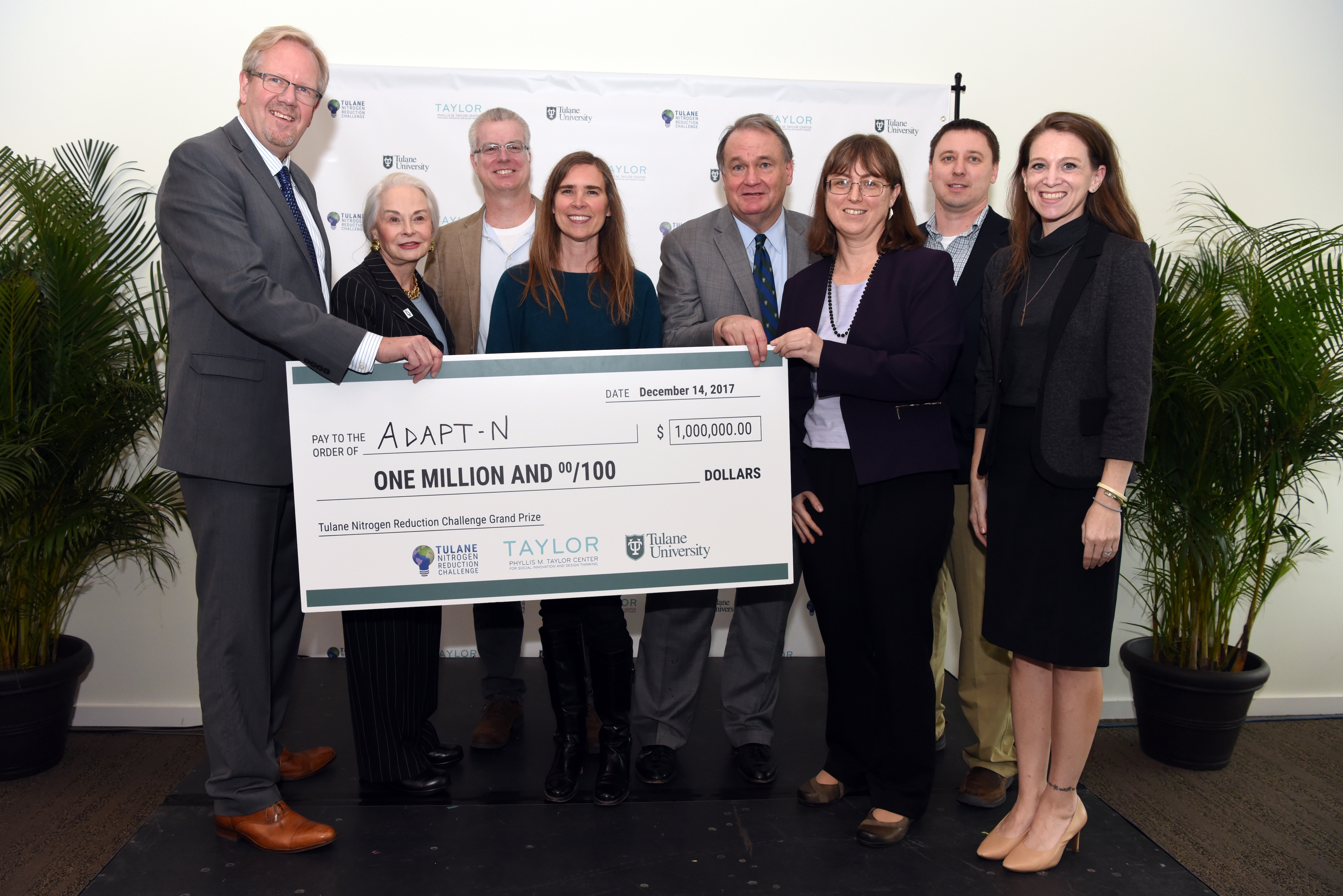 The Tulane Nitrogen Reduction Challenge is an international competition to find a significant, scalable solution to reduce nitrogen runoff from farming, a primary culprit behind vast algae blooms that cause massive annual “dead zones” in waters throughout the world.

Adapt-N competed against three others challenge finalists, Cropsmith of Farmer City, Illinois; Pivot Bio of Berkeley, California and Stable’N of Carmi, Illinois. Teams tested their innovations during a growing season on a farm in northeast Louisiana along the Mississippi River.

A 16-member advisory board of academics, scientists, environmentalists, entrepreneurs, farmers and national experts selected the winner based on crop yield, nitrogen reduction and the cost and market viability of their innovation.

“The user enters some basic information on management practices like the date of planting, the type of corn hybrid that they are using and some information on the soil like the organic matter content,” said Adapt-N team leader Harold van Es. “We combine that with other data, notably weather data, like precipitation, solar radiation and temperature, and then we dynamically simulate the nitrogen environment in the field — in the soil and in the crop.”

The system is designed to enable farmers to reduce the overall nitrogen rate while increasing profitability.

“We can roughly reduce the environmental impact by about a third — 35 to 40 percent — and that’s both the impacts from nitrate leaching, which is the primary concern with the Gulf hypoxia issue, as well as greenhouse gas losses, which is also a big concern,” van Es said.

Tulane launched the grand challenge in 2014 to identify and nurture the most innovative and adaptable technologies to fight hypoxia. Seventy-seven teams from 10 countries entered the contest. Phyllis Taylor, president of the Patrick F. Taylor Foundation and a member of the board of Tulane, funded the effort.

“Mrs. Taylor’s vision of the Tulane Nitrogen Reduction Challenge highlights the opportunities with technological innovations. But we should see this event in a much bigger context, in my view, as a start-off point for governments, the scientific community, the fertilizer industry and farmers to raise the bar on nutrient management,” van Es said. “That will end up helping solve the hypoxia problem. It is time. And I hope that they will fully embrace these types of innovations and help farmers overcome the adoption barriers.”

Tulane President Mike Fitts thanked Taylor for her leadership in spearheading the challenge and inspiring innovators to come together to focus on a major environmental issue like hypoxia.

“This competition, this process, has set in motion some of the great minds around the world thinking about an important problem,” Fitts said. “That is what Tulane University is about. And this is such an inspired way for us to participate in solving world problems.”